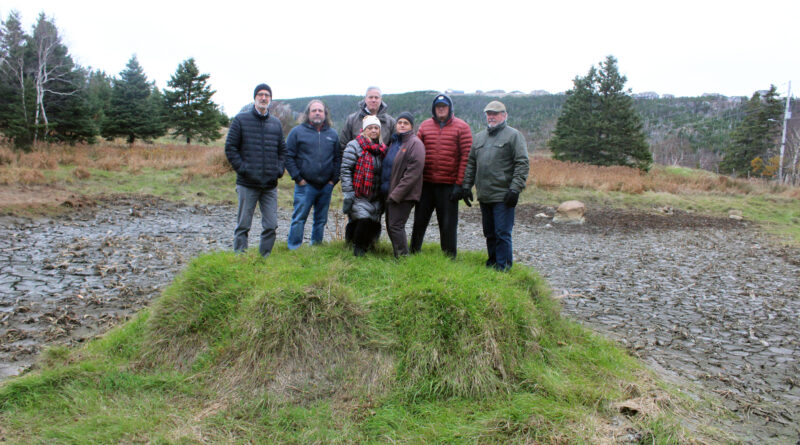 If you grew up in Topsail, you’ve probably skated on the Frog Pond.

Residents who live on Frog Pond Road, some of whom grew up there, describe seeing cars line up along the road, winter after winter, discharging everyone from tots to seniors for a game of shinny. In recent years, some have even brought their own generators and lighting systems so could enjoy the ice late into the evening.

“Its joyous,” said Sandy Collins, who has lived on the road her whole life. “I would just sit and watch, because I was so happy to see how many people enjoyed it. It just warmed your heart. I think it’s a little treasure here.”

Peter Dunn lives alongside the Frog Pond on Frog Pond Road, and has lived there for 50 years.

“It’s a landmark for us here in Topsail,” said Dunn. “We all grew up skating on the Frog Pond. I remember walking down to the Frog Pond with my skates. And a friend of mine, here’s out in the Goulds, and he calls me all the time during the winter and asks, ‘Hey, what’s the gully like, can you go check it out?’ And there’s always someone down on the gully skating. It’s beautiful.”

Randy Bell, who owns the land, said his father bought the property in 1943, and that on the deed of sale, ‘the Frog Pond’ was clearly marked. That same deed, says Bell, marks the pond as having existed since the 1800’s.

Bell has never thought of shooing the public off his land, and he’s glad so many have enjoyed the gully over the years.

“I’ve never put a fence up,” said Randy. “People go in there and skate all the time. We wanted to be part of the community, and we thought, ‘We have something that others don’t, so why not share it?’”

“The Pond has always been here; it’s been here as long as I remember,” said Tim. “It’s gotten to low levels in the past and even dried up for a short period of time a number of years back, but it always comes back, because the springs have always been here to feed it. It’s been a fixture here, especially in the winter. People come from all over town to skate with their kids. I skated here as a young kid. Everybody who grew up on the road skated here as a young kid, and played hockey. It’s well known. I don’t even recognise some of the people that come here… On one section of the pond you’ll see a bunch playing hockey, and another section parents will be teaching their kids how to skate, and there’ll be people figuring skating. So, it’s been enjoyed by many different people.”

But residents of Frog Pond Road and beyond say they are devastated at the current state of the gully, which has completely dried up, possibly beyond repair, following water and sewer work commissioned by the Town of Conception Bay South.

“I’ve been here 50 years and I’ve seen the gully empty a couple of times, but it comes back,” said Dunn. “But it’s not coming back this time.”

The work is part of Phase 48 of the Town’s ongoing water and sewer work. Council awarded the job to Black Diamond Construction Limited for $2,425,791 including HST, pending required environment permit approvals, during a council meeting held June 14.

Work began in August, and residents say that within a week the pond was bone dry.

Even after last week’s heavy rain, the pond remains not much more than a dreary eyesore.

“I always seen, if not every year, every second year, a frontpage picture (on The Shoreline) of a game of shinny down at the Frog Pond,” said Dunn. “And now it’s gone. It’s toast. Even with all the rain, it’s not coming back, it won’t be back.”

Dunn, along with other residents of the road, believe the water and sewer work displaced the natural stream that fed the gully, essentially destroying a wetland. Residents allege that water could be see being pumped out of the stream for days on end.

“It just bothers me that they can do that to the environment and just walk away from it,” said Dunn. “It’s an easy fix — just dig it up and reroute the water.”

Over the years, the pond has been home to many creatures, besides those of the two-legged skating kind, including ducks and – you guessed it— frogs.

“Because it’s a natural habitat for frogs and ducks, I am just stunned that this could happen,” said Collins. ‘I’m floored, I didn’t think you could just destroy a natural habitat where this stuff is thriving… The heartbreaking thing is we’ve had the frogs back, and the pond has been full of ducks… We’re always trying to keep it clean, we take pride in it.”

Dunn said he’s had little satisfaction from the Town’s engineering department. The answer that he said he finally managed to wrangle from them — an answer that he was none too pleased with— was that the Town would move ahead with paving the road and adopt a ‘wait-and-see’ approach.

That could mean paving the road and then digging it up again in a few months time.

“What a waste of taxpayers’ money that would be,” said Dunn.

“Frog Pond is iconic to a lot of people,” he summarized. “It’s a landmark that’s gone. It’s almost like saying, ‘Lets close off Topsail Beach so that no one can go down there anymore.’ It’s history gone, in my opinion.”

Landowner Randy Bell said he has received a similar response from the Town.

“I’ve been talking to the engineering department at CBS, and they’ve said to me they’re well aware of it, and they know they have to do something about it, and they were trying to say, ‘Lets wait until the spring and see what happens,’” said Bell. “Well, they’re going to pave that road, and once they pave it, they’re not going to dig it up again. So, I’m concerned. Why not do something now? So, I said to them, why not take the fire hydrant, fill the pond with water, and see what happens?”

He said that idea was shot down by the Town on the basis that the water from the hydrant was not treated and could harm wildlife.

Still, he remains hopeful the issue can be resolved.

“My son is going to call the mayor, and my daughter has talked to the Ward One councillor so she is aware of it, so what I would like is to use all the avenues we can to see that it gets corrected,” said Bell. “If they turn a blind eye to it, then who knows what we’ll do.”

The Shoreline reached out to Ward One councillor Shelley Moores on Tuesday, November 15, and again on November 16. She responded with an e-mail to say she had forwarded the request on to the Town’s communications manager.

Communications Director Maggie Hynes told The Shoreline the Mayor is the Town’s official spokesperson, and that requests are typically made to her so she can take action on the request.

On Thursday, The Town issued an e-mail statement. It read, “We are aware of our residents’ concerns and appreciate receiving feedback on the issue. The Town will continue to closely monitor the area to identify any impact that may have been caused by construction. We will keep residents informed.”

The Shoreline also tried to reach Black Diamond Construction but could not find a website or telephone contact information. Attempts at phoning people who may be associated with the company were unsuccessful.

Residents, meanwhile, allow they are pleased to have water and sewer, but do not like the apparent cost.

“It’s one of the biggest disappointments I’ve seen along this road,” said Tim Bell. “It’s great that we have water and sewer, I wouldn’t take that away for a second. We’re one of the last roads in town to get water and sewer. But it shouldn’t come at this price.”