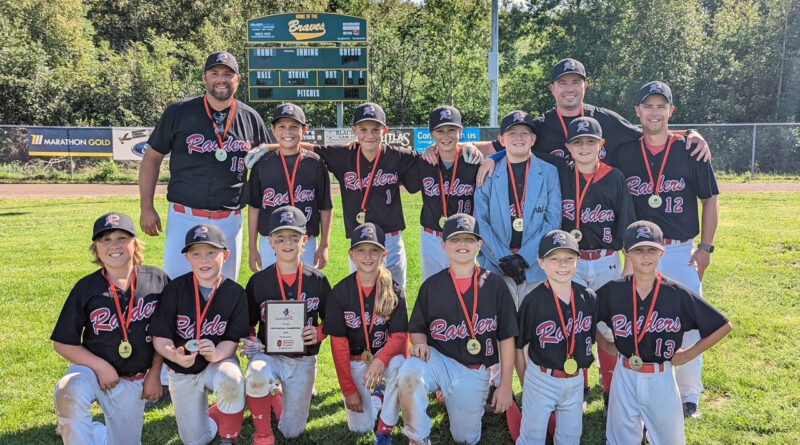 The U11AA CBS Raiders are packing their bags for Bridgewater, Nova Scotia.

The ball team will be representing the province and competing for the title of Atlantic champions.

“They’re a strong team, and I think they’re going to turn some heads when they get to Bridgewater,” said Coach Mike White. “Some of these players may never get this opportunity again, so it’s a huge accomplishment, so they’re excited and obviously a tiny bit nervous.”

White said the tourney caps off a great season in which the team went undefeated in the U11AA division. He estimates the team played forty-plus games this season, never losing an AA game, although they have, he said, lost just a couple games against AAA teams.

“They’ve accomplished a lot throughout the season,” said White. “They’ve earned the right to play in this tournament. And that’s a huge confidence booster. From the start of the season, we’ve talked about teamwork and respect and hard work, and how when you put all that together, it equals success. We talked about that on day one. So, here we are at the end of the season, and we’re playing in the best tournament you can play in, so it means they’ve listened, and accomplished everything they’ve tried to accomplish.”

He said he encourages players to have confidence in their own ability and to nourish the will to never quit.

“That’s really what this team is made up of,” said White. “This team never gives up. Any one game, we could be down three or four runs, but we always manage to come back, because every kid, even though they’re only 10 or 11 years old, has a lot of confidence, and they never give up. And that’s a life lesson.”

To reward players, on a regular basis, White introduced ‘The Raiders Jacket’ this season.

Based on the Toronto Blue Jays home run jacket, The Jays Jacket, ‘The Raiders Jacket’ bears the names of all the communities within CBS that Players of the Game get to wear.

White said it’s become quite the hit around the diamond.

The Raiders will be competing against four other teams over the September 16 weekend: two from Nova Scotia, one from PEI, and one from New Brunswick.

The team is asking that anyone willing to sponsor its trip or make a donation to call Team Manager Heather Taylor at (709) 682-1646. The organization estimates travel costs will be in the ballpark (pun intended) of $30,000.