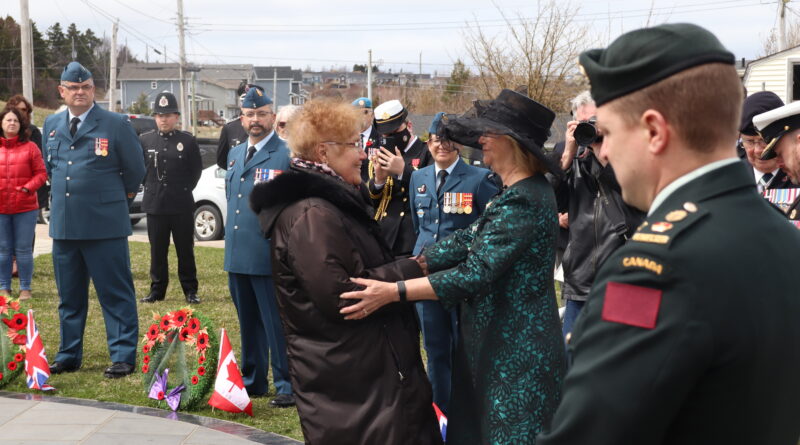 A fair-sized crowd showed up for the annual Commemoration ceremony for the Battle of the Atlantic at the CBS Monument of Honour on Sunday.

The ceremony is organized by members of Branch 50 of the Royal Canadian Legion in Kelligrews, along with Town staff.

“It’s extremely important that we never forget the sacrifices of people that go to work every day to serve their people, their country and their province. If we don’t recognize them then there’s no question that we will repeat our faults,” said Wayne Miller, a member of Branch 50 with some 34 years of service in the Canadian Forces under his belt.
“We did the ceremony, as we’ve done it every year, to recognize sacrifices of veterans, of course, and of course The Battle of the Atlantic, the Landing of Normandy, which is D-Day, and Vimy. At the same time we recognize the paratroopers who drowned in the Ottawa River (during a training exercise) in October ’68. Three of them were signalers/communicators…There was four signalers and three infantry guys who were doing a training parachute jump and when they left the aircraft, the wind blew them off course. They landed in the Ottawa River and drowned.  The other thing we commemorate is Flight Tusker 27, which is a search and rescue which was coming back from Labrador and it ran into trouble and it crashed and all the members on that flight were killed. One of those members was from Conception Bay South.”

Miller was referring to Master Corp. Darrell Cronin of Kelligrews.

Sunday’s ceremony saw a Search and Rescue aircraft fly over the monument in honour of the service.

Lieutenant Governor Judy Foote was on hand to greet the women.

Turner-Petten said that it was an honor to present a wreath on behalf of families who have lost a loved one in the Canadian Armed Forces.

“It was nice, it was humbling,” said Turner-Petten of her participation in the ceremony. “It was an honor, how would you say it – I know the Silver Cross was for me for losing him, but to me it (the medal) was more for him.”