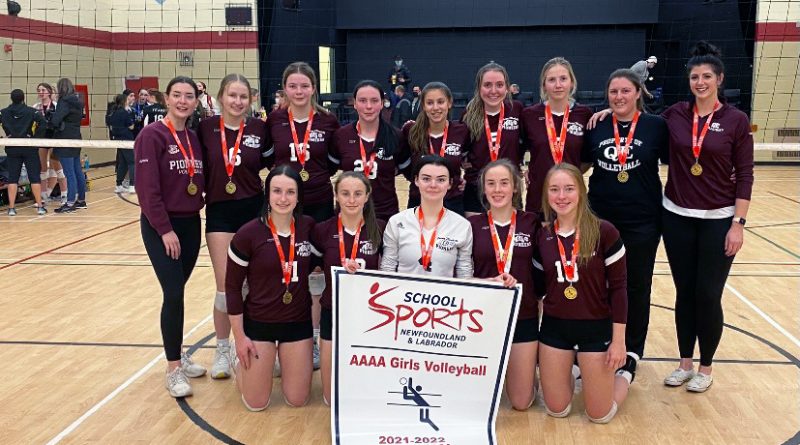 The Queen Elizabeth girls’ varsity volleyball team are 4A champions. The team qualified in a wild card position and went on to become the 4A champs this December.

“This team has had a lot of success over the last six years, so it was nice that in their final year of high school they could win the provincial banner to cap it off,” said coach Jillian Lahey.

Last year, the team qualified for the 4A tournament, though that tournament did not go ahead due to COVID, just one of many.

“Our team is a good group of friends, and the girls all click together,” said Lahey. “This is a way for them to spend time with each other outside of school. They’ve been playing together since Grade 7.”

With the majority of players set to graduate this year, coaches will be tasked next year with recruiting a new varsity team, a job that will no doubt come with some challenges — one of them being facility access.

It means that some clubs were able to play more than others, depending on availability of venues, and that the lack of a facility during pandemic times may be a detriment to younger CBS girls looking to join the sport.

“CBS not having a rec facility made it even harder for teams to train outside of school,” said Lahey. “I also run the CBS Volleyball Club, and we had to shut everything down for a couple of years because we don’t have a facility to host (tournments). Whereas teams in town were still able to rent rec centres and community centres.”

Lahey said that 44 girls tried out for volleyball this year, and she says that anybody interested in playing should at least try out.

“I would say, just go out and give it a shot,” she said. “If you don’t, then you’ll never know if you are capable of making a team and playing. And volleyball is not all about winning and losing and competing, there’s a lot of other stuff that goes along with it too… You get a new sense of community and family which I think, especially now during the COVID time, has really helped a lot of athletes.”