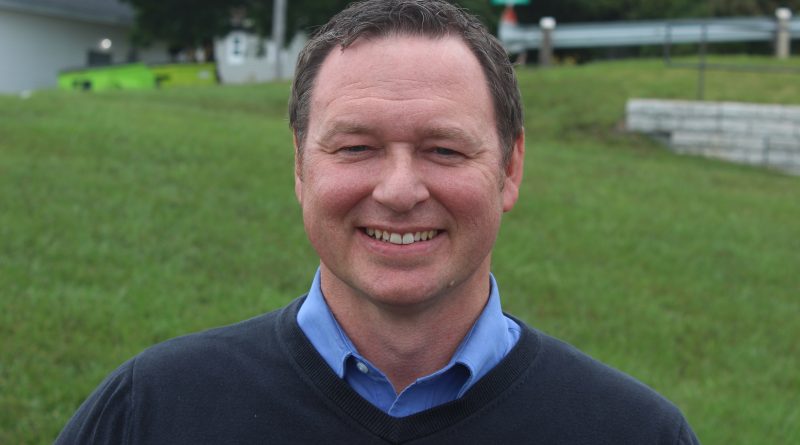 A third candidate has entered the race for the mayor’s chair in Conception Bay South.

Brad Suter has lived in CBS his whole life and said he often keeps a close eye on the goings on at Town Hall.

He said council’s handling of the controversial OCI Long Pond harbour development is what made him first consider his candidacy.

“Much of that was kept a secret,” said Suter. “And listen, I understand commercial sensitivity when people want to reveal projects and you can’t reveal all of the project, but there is no doubt that you look at something like the decision-making process around that, and the odds were completely stacked against residents and concerned citizens.”

Suter criticized a number of aspects of the project, including what he called a lack of transparency. He also criticized the town’s decision to move ahead without an environmental assessment.

“You would have had people living there for decades being impacted by a project that is not completely understood. There’s more understanding now, but my take on it is that the town could have still required the environmental assessment on it. Just because there are laws around when the environmental assessment is required, that’s not to say that the town couldn’t have said, ‘No, we want to have that because that’s an important part of our decision.”

He also criticized the original land sale to the company.

“If you look at the idea that the Town said, “Oh, we sold land to OCI!’ well, that’s really disingenuous when you consider that land is under five or six feet of water,” said Suter. “So, it’s not really land… I have no issue with a business that wants to move to town, whether it’s OCI or someone else. It’s not about OCI. And I don’t think to vilify OCI is the right approach.”

He also criticized the Town’s involvement in the Long Pond Harbour Authority (LPHA) itself.

The Town’s Economic Development Officer Jennifer Lake and CAO Brian Crawley are both members of the authority’s board of directors.

“I see it as time to make it either completely independent, as its own entity with no influence of the town… or, roll it right into council, and make it a completely transparent entity that’s completely answerable to council,” he said.

Suter also criticized the town’s recent decision to develop land behind Dominion for use as a community park, citing a lack of a parking plan for such a major recreation centre. He suggested the new park, along with the new library destined for Remembrance Square, could have been built in the struggling Gateway development area in Kelligrews.

“So, how did the decision get made around that, when we have Gateway, and we have lots of land, and we can’t seem to make any headway with it,” said Suter. “And yet, we’ll shoehorn event venues in behind Dominion with no land impact assessment done, and no proper zoning. So, what’s the decision-making process here? My take is that we need more accountability, and more transparency into how decisions are made at council.”

He added that money spent on the park would have been better put towards fixing the town’s water lines.

When mulling over the idea of putting his name forward, Suter thought at first he might run for councillor at-large or even Ward 1, but said he made the decision to run for mayor when he saw the two other mayoral candidates— Darrin Bent and former mayor Steve Tessier.

“Those two candidates are not the candidates for change,” said Suter. “I think what we should see is people stand up for what’s right, stand up for transparency, and stand up for accountability, and I never saw that from Darrin. When I look at Steve, I think, ‘You had your time there. You’re not really a new voice.’”

Suter said residents are clamoring for the same change.

“The sense at the doors, and the things people tell me over facebook and other media, is that there are a lot of things that people have to ATIPP, and there are a lot of things that people are never told about that should be in the public domain… In this day and age, I believe that’s why people are so skeptical about government and about politics,” said Suter. “They don’t understand how decisions are made — what they see are the rules being changed to suit certain interests… People are looking for change. People are looking for a different perspective.”

If the Suter name sounds familiar in the realm of municipal political, it’s because his father, Martin Suter, served as mayor in the mid-80’s.

Suter said that recalling his father’s time on council gave him pause.

“When he was elected, it was 1985,” said Suter. “I even remember his slogan, it was ‘Come Alive in 1985.’ And it was hard. It was not easy. And that was in the days before social media. I remember kids my age, in my class saying stuff about my father, and I really took it to heart. I remember it being tough, and that’s why I hesitated. I have a son who’ll be 13 in March, and my other son is 18.”

Suter admits there may be some name recognition due to his father’s two terms on council, but he thinks he’s been around long enough to stand on his own two feet.

“If people liked my dad, hopefully they say, ‘Yeah, another Suter.’ For people who don’t like some of the decisions he endorsed, hopefully they forgot,” he joked, adding he would ride on his education and experience, not the family name.

Part of that experience is Suter’s eight years working with the Business Development Bank of Canada.

“Over the years, I’ve probably helped at least 400, probably approaching 500 businesses in the province get the finances and advice that they needed,” said Suter.

Whether or not current Mayor Terry French had put his name forward for re-election, which he did not, Suter said it is time for change.

“We need to get back to basics,” said Suter. “We need to focus on the infrastructure projects that benefit the most people, and make the best use of our tax dollars, and act with the core values of integrity, accountability, collaboration, and transparency.”