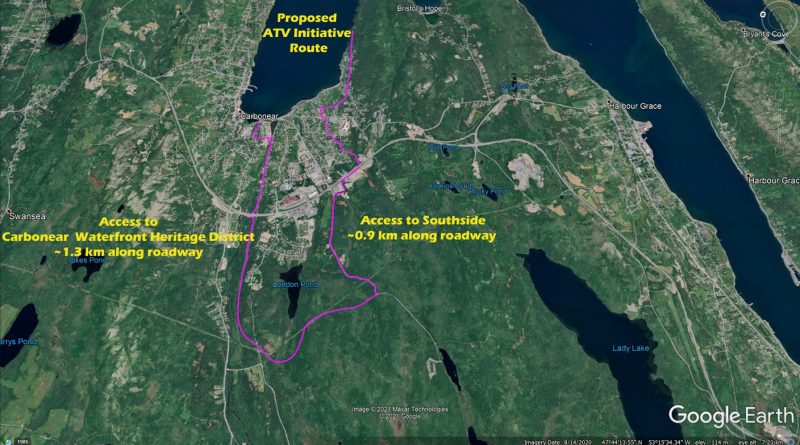 There may be some quads on the road, legally, in Carbonear’s future.

It is not uncommon to hear or see ATVs and other off-road vehicles on roadways in municipalities across Newfoundland, and Carbonear is no exception.

Some towns and cities are trying to adapt to the situation, such as Corner Brook which, since 2019, has been allowing ATVs on certain roads.

The Town of Bay Roberts, too, has made moves toward making ATVs a legal use on some roads.

Now, the Town of Carbonear is gearing up to do something similar.

Councillor Ray Noel raised the idea at last week’s council meeting. Noel said it is something that has been discussed for some time and tossed by a number of the Town’s committees back to December last year.

A special committee was struck to look at the notion. It was comprised of councillors Danielle Doyle, David Kennedy, and Mayor Frank Butt with Economic Development and Tourism Officer Kerri Abbott and Director of Recreation Rob Button also participating.

A plan has been developed following meetings that involved information gathered from other communities, and the RCMP.

“We’ve come up with a proposed route, and we have a survey that we’d like to put out to the residents of the Town,” Noel said, noting this was the time to pose any questions or concerns.

Following the survey, Noel said, the next phase will be a public consultation session.

The survey will be delivered to residents and available online. Those who wish to fill out the survey must have it back in the Town’s hands by Friday, May 14.

“The municipalities we were in contact with were Corner Brook, Deer Lake, Pasadena, and Clarenville,” Noel said, noting staff found no municipalities that were unsuccessful or had to abandone their ATV plans.

A trial period for the proposal may run between May 15 and Dec. 15 of this year, with ATV operators expected to adhere to the regular rules of the road.

The proposal would also only allow ATVs on the roads during daylight hours.

“At this point, we need the public to be engaged. That’s why we’re doing it,” Noel said.

He clarified that if the survey shows a majority of residents against the idea, he could not see the Town going ahead with it.

“But we need that information because, right now, we’re just guessing as to what that might be,” he said.

Deputy Mayor Chris O’Grady suggested the Town should take a more neutral approach to the survey, as it has on past issues.

Noel said the survey will come with a copy of the Highway Traffic Act, as well as contact info for people who have questions.

“We didn’t have a municipality that said ‘We tried this and it didn’t work,’ but had we had that we would have included it,” Noel said.

He added there will be a much more thorough discussion on the topic once the results of the survey are brought back to council.

“We’ll deliberate, we’ll break down and look closely at the results like where they came from, the numbers, and all that stuff. We’ll have a discussion on that before anything else is done, but we need that information,” Noel said.