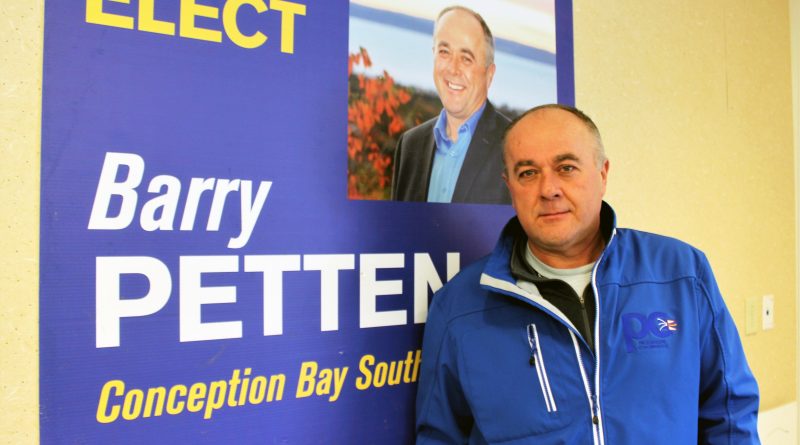 Conception Bay South will once again be represented by PC Barry Petten in the House of Assembly.

It was Petten’s fourth election win in the district since his first contest, a by-election in 2014, which he squeaked through with less than two per cent more of the vote than the other main contender.

Petten increased his margin of victory substantially each time since then. He came out of this year’s provincial election with 3,063 votes, over 57 per cent of all votes cast. He was followed – in order – by Liberal candidate Shelley Moores, NDP candidate Andrew Lovell, and NL Alliance candidate Warrick Butler who received 1,941, 225, and 136 votes respectively.

Although he was satisfied with another win, Petten seemed more relieved to see the much-extended election come to a close after a long haul. He recognized that for incumbents, a long election does not quite mean the same thing as it does for other candidates, who may have to take leaves of absence from work in order to run.

These people, he allowed, did not expect to have to take 10-weeks away from their jobs when they put their names in the running.

Moores, the district’s Liberal candidate, said she is one of those who had not expected to be away from work for as long as she was.

“I wasn’t able to go back (to work) until the election was over,” Moores said “That was hard, because that’s a lot more time off work on unpaid leave than any of us anticipated.”

Petten aired similar concerns for candidates across the province.

“They signed up for a 4-week event and it turned into a 10-week affair; that’s tough financially on a lot of people,” he said.

Both Petten and Moores said the election was a mentally exhausting one, with Petten stating he heard from newcomers and veterans alike that the whole process was a “stressful affair.”

Still, Petten was happy to see he still had the people’s support, and Moores said she has no doubt that she will give politics another go at some point in the future.

Petten said his re-election was a testament to the people of Conception Bay South, who he described as being nothing but good to him since he first stepped into the world of politics.

“You get back what you put in, and I’m a boots on the ground type of person,” Petten said. “My heart is on my sleeve when it comes to this community. My work day isn’t a regular 9-5, I’m constantly working, reaching out and talking to people and doing whatever it is that I can to help them with their issues. That’s what they elect you to do.”

Petten described the role of an MHA as being to actively make positive changes to the district and for its people: that’s not something everyone gets to do in other lines of work, and said he tries not to take that for granted.

“Not many people have the pleasure of going to work every day, and improving the lives of people in your own community,” he said. “It could be as simple as helping an individual with a healthcare issue, or something a bit bigger like helping get a new community centre or park … It’s an all encompassing job; one where you can make a difference to a lot of people. I take this job quite seriously.”

For Moores, it was her first shot at politics. She recognized from the get-go that she was up against hard competition. “This area has always been PC, but I did gain a lot of support. I had a lot of great conversations, and I truly believe people want a change,” she said.

Moores admitted some people turned away from the election once it became such a long drawn out process.

“Some people just chose not to vote because they were so fed up with the process, and that’s unfortunate for voters, for us, and for the province as a whole,” Moores said. “I know this election was very long and painful for some, but I still very much enjoyed it. For me, it was a good experience, and I learned a lot more about the district. I was looking forward to having the opportunity to work on behalf of the people of CBS. I don’t have any regrets.”