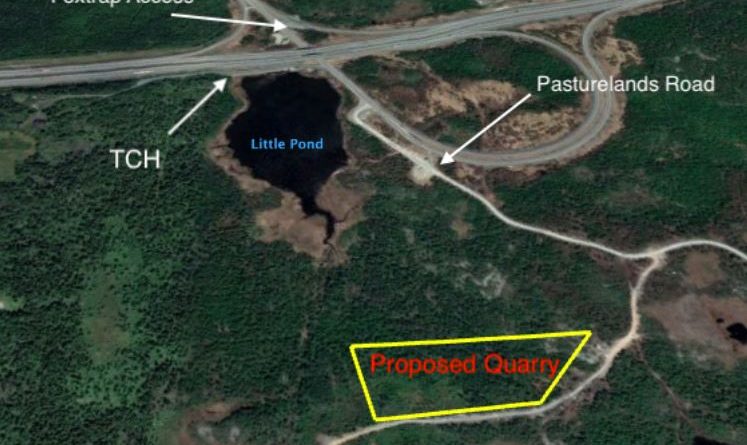 Some quarry land in Foxtrap is currently preparing to undergo some big changes. C.W. Parsons Ltd. has applied for some land along Pasture Land Road that they hope to turn into a quarry.

C.W. Parsons Ltd., a paving contractor based in Paradise, entered the environmental assessment process for the application in September of 2020, according to a civil engineer technologist with the company, Alanna Parsons. A part of that process is to hold a public consultation wherein citizens of the region can weigh in with their concerns, if any.

That consultation was held virtually last week, on Thursday morning Feb. 11. The Zoom session only saw two others join in alongside Parsons: Paul Price and Toby Barnes, representatives of the Mount Pearl scouts, whose Camp Morristown is also located just off the Foxtrap Access Road.

Parsons said from the get-go that she feared there may be some misunderstandings about the site’s location, and she hoped the consultation that morning would help clear things up.

She said the quarry is not large-scale when it comes to blasting and drilling – not like the “every day quarry.”

“This is going to be minuscule compared to what’s already up there,” she said. “The purpose of the quarry is going to be for gravel and pit runs for any jobs that we have. And then storage of the material as well.”

The first of the concerns outlined by the Scouts was with blasting operations at the proposed quarry.

Parsons explained that before any blasting can get underway, they would need to clear away the land a bit more, ensuring that when the time comes, they will send out notifications to anyone who would need to be aware. This, she said, includes the Mount Pearl Scouts and the Church Lads Brigade who also have a camp nearby.

Parsons said the location of the quarry is far enough away from everything in the area that they fall well within the blasting regulations relating to distance and 1-kilometer buffer zones.

She also highlighted there are other quarries located around that location, and said coordination between them will be a key component to making this new site work.

The quarry that C.W. Parsons is looking to set up, near Dog Hill, will take up about 1.81-hectares of land. According to Parsons, this is about half the size of the biggest quarry there.

Typically, she added, the site will be a Monday to Friday operation, so no blasting will take place during the weekends.

A potential increase in traffic along Pasture Land Road was something that Price brought up.

“We’re only a little bit into Pasture Lands Road, and then we turn off,” Parsons said. “So, the only bit of (the road) that would be affected by traffic to, say, your camp, is that first stretch of the road. But, we will still make sure our operators are fully aware of the traffic control plan, speeds, dust control, all that.”

She did agree with Price’s second point though, that the increase in specifically heavy traffic would likely have a negative effect on the state of the road.

Barnes suggested a group effort between everyone working on quarries in the area would be beneficial for everyone involved, even the Scouts and other local youth organizations.

He said that these organizations have been in the area longer than any quarries.

“All these quarries have been slipping in under the radar without providing proper notification,” he said. “We’re catching up on this now, and there needs to be better communication going forward if this quarry is to proceed.”

Parsons said this exact idea has been thrown out there, in an effort to create a streamlined form of communication between all the quarries.

She was unable to speak any further on whether this idea has taken off, but did agree it would be a good one, and that C.W. Parsons was open to it as long as the rest of them were as well.

“We understand the importance of what (the Scouting groups) do up there, and we don’t want to tarnish that at all,” she said.

Barnes further explained that he and the rest of the Mount Pearl Scouting groups had not received any notification about C.W. Parsons’ application, and only knew about it through word of mouth.

Parsons, however, said that C.W. Parsons had been following the communications outlined in the application they received when they applied for the quarry.

“It wasn’t laid out by the government that we had to alert everybody else. We assumed that that was kind of their job to put out a public notice,” she said. “We’ve been doing every aspect that we were required to do.”

Barnes said he understood, and the problem appeared to lay more with the bureaucracy.

At the moment, he said, there is no good will between the parties using land in the Pasture Land Road area.

“We’re obviously not happy with the situation,” Barnes said of the various quarries that have popped up over the years. “They have gone under the radar without providing adequate consultation … They’ve followed (governmental guidelines) to a T, but haven’t gone in any direction in terms of providing good will to the historical users of that area. In fact, it’s rather discouraging for our youth. They’re asking questions that we as their parents and leaders end up having to address.”

The paperwork for the quarry is still underway. As of the Thursday meeting, C.W. Parsons was still going through its various stages of approval, including an environmental assessment.