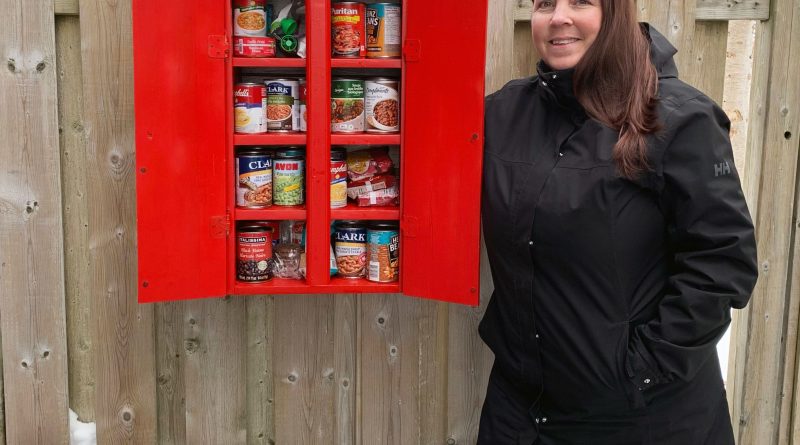 A community initiative that seems to have started in St. John’s and has since spread across the province is helping meet needs in the community that may be heightened due to the COVID-19 pandemic.

In the last number of months Little Free Pantries have popped up in St. Johns, Mount Pearl, the Goulds, Conception Bay South, and Holyrood, amongst other places.

Behind each is a dedicated team of volunteers and community-minded residents.

Lisa Courtney started up the community pantry in the Goulds in January after she saw the success of Jackie Quinlan’s St. John’s pantry.

“I thought to myself, ‘What a great idea if I could offer it here in the Goulds for my own community,” said Courtney. “So, I popped her a message and I asked her if she had any advice or any tips on how I could start this myself here in my own little community. And she said, ‘First off, find a pantry and go from there.’ So I did,”

Courtney found a pantry online, painted it a cheerful red, set it up on Keith Drive, and then called on the community to help her keep it full.

The pantry, which operates on a ‘Take what you need, leave what you can,’ basis, has been a challenge to keep stocked, but not for lack of donations.

“Just this weekend alone, after hearing the news of the variant and the community spread, I’ve been out to my pantry alone two and three times a day just trying to keep it full,” said Courtney. “The great thing about it, in the Goulds, if someone is in need, we all pull together. So, I’m very humbled by the support so far from the community that I’ve been getting. It doesn’t matter what kind of donations I’m looking for, they always, always, always pull together, and if someone is in need, or needs food, or needs clothing, or anything like that, they always come through. I’m finding that people aren’t abusing it. They’re taking just a couple of meals or just a couple of snacks at a time and going on their way.”

Over in Holyrood, Charlotte Wade, who also followed Quinlan’s example, said that in addition to the original pantry on Kennedy’s Lane, they have added a second pantry near Ridge Road, and hope to add a third pantry in the near future.

“I think all communities should have one,” said Wade. “I’ve actually donated my first pantry, because we’ve upgraded within two weeks because I realized how much it was going to be used, to Avondale, so now they have one up and running. So, it’s been a snowball effect.”

She put out a feeler before opening the pantry in January to see if the community was interested, and said residents and businesses were quick to jump on board.

“I think the need was always there, it’s just that people became more aware of it during the pandemic,” said Wade.

But the need was greater than she imagined.

“The more I’m showing the community that the need is there, the more they’re coming and filling it,” she said.

Unlike food banks, there is no screening process and the doors never close. Folks simply take what they need, and leave what they can.

“You give what you can, and you take what you need,” said Wade. “It’s designed to be anonymous; it’s not supposed to be policed, none of us are here to judge who is worthy of help. Just because you’re driving a truck or a car doesn’t mean that you’re not struggling this week.

“I have people who I know take from the box, but they also give when they have it as well.”

Back in the Goulds, Courtney said she follows strict pandemic protocols to make sure everyone stays safe.

Wade said currently she is asking folks to leave items with her so she can sanitize them before putting them in the pantry.

The extra effort required to maintain the pantries are another show of love by those helping others through this challenging time.