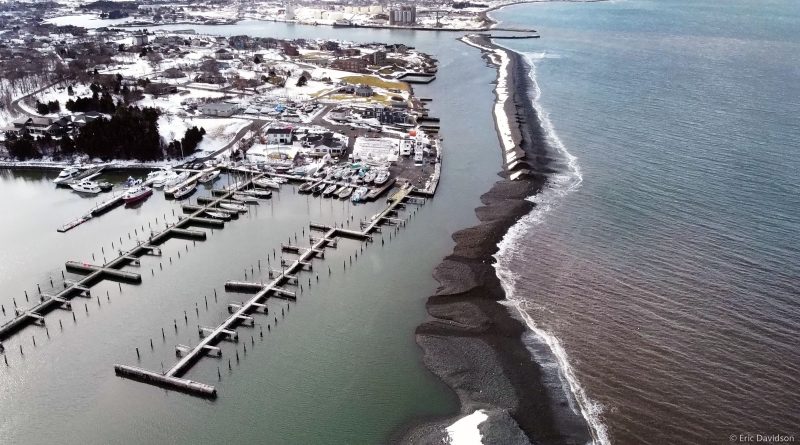 The breakwater that protected the Royal Newfoundland Yacht Club’s basin in Long Pond has taken yet another beating from Mother Nature.

The barachois was pummeled last week by high swells caused by a storm off Greenland.

It comes only about a year after the breakwater suffered significant damage during the record-breaking storm known provincially as Snowmaggedon. At that time, emergency inspection and repairs came with a price tag of about $1.4-million – money that CBS Mayor Terry French said is still coming in from provincial and federal agencies.

French said when repairs were done in 2020, it was no secret more work would be necessary to do more than simply replace the damaged bits of breakwater.

The Town was in the process of hiring an engineering firm to see exactly what would be needed to ensure the breakwater’s longevity.

Since the latest damage was inflicted, French said the breakwater has been under constant surveillance.

Compared to last year’s damage, French said this recent hit is not quite at the same level. But, with less-than-favourable weather incoming throughout the week, it was important to get repair work underway as quickly as possible.

With time being of the essence, French said, a number of contractors have been contacted to get prices – as many as they could with the time constraints – and as soon as the weather allows, he hopes to have workers on the barachois making repairs.

“We realize that residents have infrastructure along the inner harbour, businesses are there we have our own community park in there, the Yacht Club is there, there are a lot of things there that contribute to the viability of the Town,” said the mayor. “So, it’s something we’ve got to keep an eye on and do what we can to get some support from our federal and provincial friends to help fix it once and for all.”

French said the long-term work needed to ensure the breakwater’s longevity could take years, and cost much more than what the Town can afford on its own – upwards of tens of millions of dollars.

The initial repairs from last week’s damage, however, will be made much quicker. French said they are expecting prices back this week, and work is expected to start within days.

“This safety piece, the immediate repairs, are what we’re going to deal with now,” French said. “But, it’ll probably take a couple of years to get it where we really need it to be.”