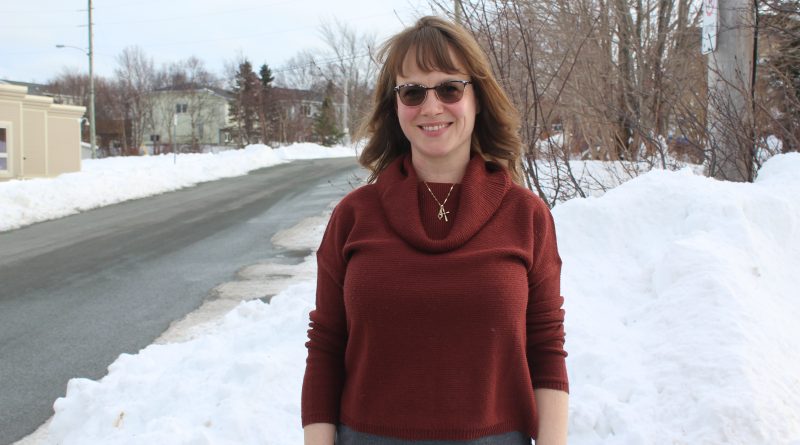 Music has often been regarded as an effective avenue for the expression of one’s innermost thoughts and feelings, and even as a way of escaping from reality at times. For Power, music is a key piece of the puzzle for overcoming the challenges and setbacks that life sometimes throws our way.

Power describes her musical output as folk, or Eastern country. Songs about every day life growing up in Newfoundland are what she prefers to create, which she hopes connect with people on a personal level. Power is in the running this year for Music NL’s Canadian Mental Health Association Inspirational Artist of the Year Award. This is in part thanks to some of her subject material, which deals with her own struggles with mental health and her healing to become a stronger person.

The Upper Gullies native has been writing songs to her time as a research analyst on homelessness issues in Toronto, Ontario in her 20s.

Back then, she recorded and released her debut album, but soon experienced what she described as a mental health crisis, leading to her moving back home to Newfoundland in 2010 to recover. Power put song writing to the wayside as she started a family of her own, and was heavily focused on raising her two boys.

“Just this year, I got back to songwriting. It just came to me,” Power said, adding that it was actually at the beginning of the COVID-19 pandemic, when most people were beginning the habit of self isolation, that she picked up a pen and paper again. “(Isolation) brought me back to a time of a simpler lifestyle, because that’s what this was doing, simplifying people’s days. They weren’t going to all these different places every day or every week, it was mostly just staying at home for a lot of people.”

Power got to writing about daily life in her younger days, and of her mother, who recently died of cancer.

“I grew up with homemade bread, homemade meals, and our social life was heading out in the woods or on the trails with the trikes,” Power said. “I just thought, what’s wrong with that? Nothing. It’s just not the way it is now for a lot of people.”

Because of Fibromyalgia, Power said a lot of her life has been similar to isolation in a way. Her brain sometimes processes touch and pressure as pain, which she said has strongly limited her life in a number of ways. Power said she felt plenty of stigma around her because of her condition, on top of dealing with depression and anxiety. That seemed to dissipate when she saw everyone now living a lifestyle similar to the one she has had to live with off and on due to health issues over the years.

“Well, everybody is sort of in the same boat now,” she said. “So, I thought that if I got online and started to sing, and share my heart and my feelings, then people wouldn’t notice that I had this invisible disability.”

That is, however, until Power started to use her music as a means of telling a more personal story. She began to sing about mental health, and how she continues to cope with it, and how it is something that a large number of people struggle with these days.

“That’s when I found out that so many other people were feeling the same way as me,” she said. “They felt isolated for years. The whole world became isolated, but there are so many people out there who have felt that way for far longer, myself included. It can be consuming.”

So, Power’s return to music has blossomed into something new; a way of overcoming her own struggles, and providing people with similar challenges a sense of hope and understanding.

That, to her, is what music is all about.

“There’s comfort in lyrics like these, in sharing stories of resilience,” Power said. “When I share a song, I always seem to have a little preamble or words to share after. People say those things are just as important as the song itself – sharing bits of your day, sharing your own foolishness and even your own pain. That’s not something people often get a chance to do, and it can be very healing; even more so when those are shared pains and shared experiences.”

To Power, music has never been about making a name for herself, but rather about the message behind the tunes. Still, she said, being recognized on a provincial platform such as Music NL has been an overwhelmingly positive experience and can only mean great things for the future.

She admitted the thought of obtaining accolades or awards hinders her writing process, and so she generally tries to avoid putting too much thought into things of that nature and prefers to just enjoy the process of writing and playing music.

“By the same token, when you do get recognized, it really is a wonderful feeling,” Power said. “I feel like it validates the people who listen to you. They feel good and want you to be recognized, but for me it’s not something I can push in my life. That would require too much energy that I don’t often have as a single mom. But, it is still a wonderful thing to be recognized for it. If more people hear about my music, then hopefully more people will feel less alone, and that’s all the better.”

Music NL Week will be held between February 1st and 7th, with the finalists for each award being announced and celebrated. In Power’s category, only one other artist is listed: Kathy Stock.

“Mental health has become an everyday conversation,” Power said of the connection she has begun to feel with others through sharing her music with the world. “I’ve received a lot of support, and I’m truly grateful to everyone who has been so kind and understanding to me since I started sharing my story. I just hope that my music helps anyone who is feeling isolated from the world like I was for over 20-years. I hope they know that there is a healing process, and we just have to believe in ourselves, give ourselves time in our self-discovery. We always feel like we need to contribute, but really, we are contributing when we take care of ourselves.”