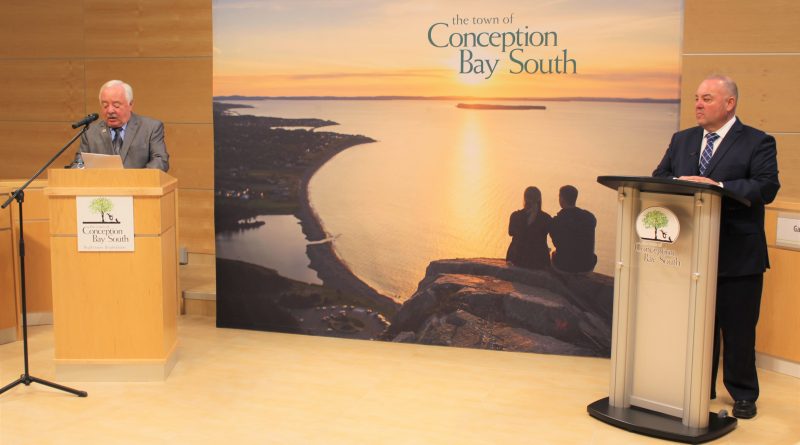 The Town of Conception Bay South presented its 2021 budget Tuesday, managing to avoid tax increases despite the rough year municipalities across the country are experiencing due to the Covid-19 pandemic.

Leaving the mil rates at 7.15 for residential and 11.5 for commercial properties marks four consecutive years that council has managed to keep the rates the same.

The Town was able to keep the figures stable despite a $2 million hit to its finances delivered by Snowmaggedon in January and Covid-19 starting in March. Some of the financial damage was covered by special injections of cash to all municipalities from Ottawa and the provincial government.

On top of that, there were a number of water main breaks throughout the year that saw considerable water loss and need for emergency repairs. The Town is expecting a higher-than-usual water bill at the end of 2020 and higher water costs in 2021 – nearly $343,000 higher, according to the estimates.

Still, Deputy Mayor Richard Murphy was pleased to report that none of this will necessitate higher taxes, or recreational fees.

Murphy said Conception Bay South has the lowest residential tax rate and water and sewer fees of comparable municipalities on the Northeast Avalon.

Keeping taxes at their current rat was one of four major priorities the Town had identified going into the 2021 budget.

The second of those priorities involved roads and sidewalks, which council has put a major emphasis on in the past few years.

“We invested over $1-million in road rehabilitation and sidewalks each year during our term, with a particular focus on sidewalk construction in school zones,” Murphy said. “Budget 2021 will continue with this focus through a significant investment in two major roads.”

Those two roads are Minerals Road, and the stretch of road between Peacekeepers Way and Country Path Road.

Part of Minerals Road will be widened, while a sidewalk will be installed along the curb and gutter leading up to Country Path Road from Peacekeepers Way. Overall, council plans to spend some $2.5-million on those projects.

Anchorage Road, too, will see upgrades in the coming year, including approximately 1.5-kilometres of paving between the Peacekeepers Way overpass and Minerals Road. The cost is being split among the Town, the province, and the federal government.

The Town’s 24-hour, 7-day a week snow clearing will continue in the coming year at a cost of $1.7-million.

Budget 2021 also includes money for phase two of the upcoming community park in Long Pond. That was the third priority outlined by council Tuesday evening.

Murphy said phase two of the project will include installation of a water park and ice skating surface. Lighting and stage installations are included in the $2.5-million allocation, as well as the construction of change rooms, washrooms, and storage spaces.

The Town’s new public library was listed as priority four.

Murphy said council had hoped to see construction of the new library begin this year, but COVID-19 got in the way. Now, they are aiming for a spring 2021 start date, and a 2022 date for opening to the public. In the meantime, council has awarded the construction contract for the 8,000-square foot facility, set to be built alongside the Town Hall and recreation complex.

The new budget also sees the elimination of the fee for new home construction permits, as well as fees for repairing or improving existing homes.

This, Murphy said, was done in an effort to reduce residents’ financial burdens following the COVID-19 pandemic. He said the idea was well received by residents, and cited a 30 per cent increase in residential upgrade permits so far this year.

“To date, we have seen construction commence on 74 new homes, which is very remarkable given that prior to the start of the pandemic, construction had commenced on only two homes,” Murphy said.

Council will formally approve the budget at its next public meeting on Tuesday, Dec. 1.

A breakdown of the 2021 revenues, includes:

On the expenditure side, the Town has earmarked the following big ticket items: