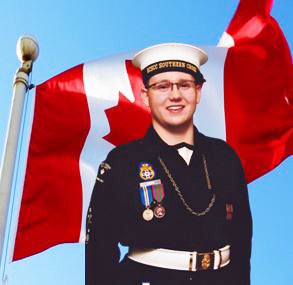 Harbour Main is the home to Canada’s latest Cadet of the Year.

Each year, the Royal Canadian Legion makes the hard decision of honouring one of the nation’s many young cadets. This year, that recognition went to one of Newfoundland’s own: CPO1 James Howse of Harbour Main.

Howse has also been chosen as the Navy League Division Cadet of the Year for the Province of Newfoundland and was awarded the Royal Canadian Legion Medal of Excellence.

Although the country’s COVID-19 restrictions may interfere this year, being named Cadet of the Year normally means that Howse would get the opportunity to travel to Ottawa to attend a Remembrance Day ceremony and lay a wreath on behalf of cadets country-wide.

To receive the honour, cadets who had references from their commanding officers were told to write an essay about what the cadet program means to them. During the application process each cadets’ history in the program is reviewed, and, after the review, the choice is made.

This year, Howse made the cut.

“I wrote what it told me; I wrote about what cadets means to me,” Howse said about his essay. “To me, it means opportunities. I’ve (been able) to do so many things through this program, and honestly if I wasn’t in cadets, I’d be a totally different person. This program, it creates leaders, and I feel like a leader.”

Howse first stepped into the role of a sea cadet at the age of 12, noting that he takes great pride in the work he’s put into the organization and spoke highly of the benefits that come along with it.

The opportunity to deploy on various ships has been a particularly fond aspect of Howse’s cadet career, he said.

“In B.C. I was deployed on a patrol boat, (the) Oriole, a sailing ship, that I think is about 99-years-old now,” Howse said. “If you’re a course cadet, then you’d be training on these ships and learning how to operate certain parts of it. When I was training on the Oriole, I got to practice man overboard drills and navigation and understanding how the whole ship works, right down to the engineering. It was a lot of fun.”

Being a part of the cadets has given Howse the opportunity to see many parts of the country he may not have otherwise, including two trips to both B.C. and Ontario, as well as four different trips to Nova Scotia.

Now 18, Howse said it is a great honour to be recognized by the organization after many years of service. With the cadet program having an age cap of 19, Howse only has another year left, but said he is able to look back at the last six years of his life with a smile on his face thanks to the opportunities he’s had through the program.

Howse said it is his love for the program that motivated him to stay involved for so long. He took it upon himself to join the program at a young age and noted that his parents’ support meant a lot to him.

“There are sports and competitions, you’re always learning things, and you get qualified for all sorts of things that you can use outside of cadets as well,” Howse said. “Last year, on the Oriole, at 3am in the middle of the Great Lakes during a lightning storm, I was at the helm of the ship, and that’s just a night I’ll never forget. It’s something I’ll never be able to recreate, and something I would not have been able to do were it not for cadets.”

While Howse is hoping he can make the trip to Ottawa, he said he is still happy to represent Newfoundland and Labrador from home.

He urged anyone with an interest in the cadet program to go ahead and join.