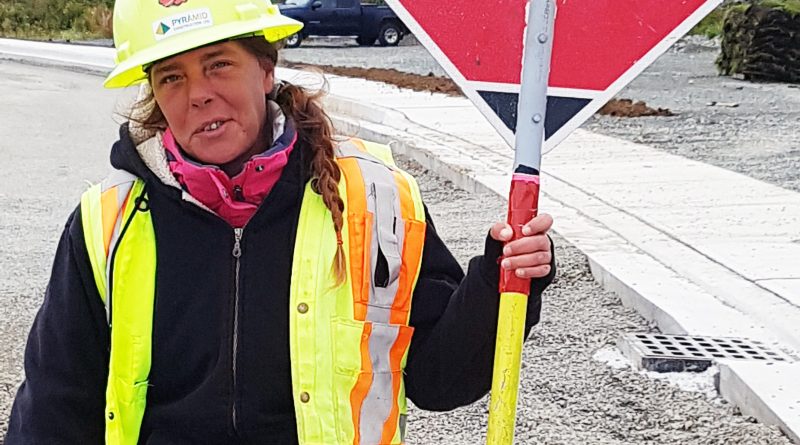 Cancer did not give a CBS woman a chance to prepare.

On Sept. 18, Conception Bay South resident Rose Janes got a call from her doctor that changed her life: she had been diagnosed with leukemia and would have to immediately stop working to begin treatment.

Janes, a flag person for Pyramid Construction, is likely a familiar face to those commuting in and around Conception Bay South during the construction season. Easily spotted while on the job, Janes is known for doing what she can to put a smile on the face of drivers.

With a simple wave of her hand, or a little dance along the side of the roadwork, Janes has managed to become a favourite among the province’s motorists, and even employees of local Tim Horton’s establishments due to her love of tea giving her the nickname “tea lady.”

Now, however, Janes finds herself in need of a helping hand to help keep a smile on her own face. Friend and co-worker Gina Elens is doing everything she could since Janes’ diagnosis to make sure that happens.

Elens took to social media to spread the word of Janes’ story, hoping to raise some money to help ease the costs associated with treatment.

“It’s going to be a long, long road,” Elens, who has worked with Janes for about seven years now, said. “She’s got no savings or insurance. She’s filed for UI, but that’s only a percentage of what she was getting anyway. So, I’m trying to do what I can.”

Originally, Elens said there were talks of setting up a Gofundme page, which is a fundraising website, to collect money for the cause. That, however, was determined to not be the best course of action since Gofundme maintains a waiting period before the money falls into the hands of the recipient.

Under such dire circumstances, Elens fears that money raised through online donations will not be received quickly enough.

“The reality of it is that (Janes) could be told tomorrow that she needs x amount of money’s worth of medication — she doesn’t have that,” Elens said. “She needs the money ASAP, and you don’t get Gofundme money until you close it down entirely.”

To collect donations, Janes’ daughter has set up an email that is linked directly to her mother’s bank account. Any money that is digitally transferred to that email will go directly and immediately to Janes.

“This way, the money is there when she needs it,” Elens said, adding the multitude of other expenses the now unemployed Janes still has to worry about, such as rent, power and groceries. “We’re sorry for the short notice, but leukemia certainly didn’t give her any notice, either.”

Elens also said that Janes is not the type of person to ask for help, which is why her friends and family have taken action to make sure cancer does not force her into bankruptcy.

“(Janes) is just so energetic, she’s loud, she’s outspoken and if you piss her off she’ll be sure to tell you,” Elens said. “I’ve only worked with her for six years, but I know she’d never hesitate to help someone who needs it. This is a hard job, and she’s good at what she does. To see her have to put everything on hold is heartbreaking, and I just hope we can make this process even just a little bit easier for her.”

Those looking to donate can reach out to her daughter, Brittany, at brittneyannpayne22@gmail.com.