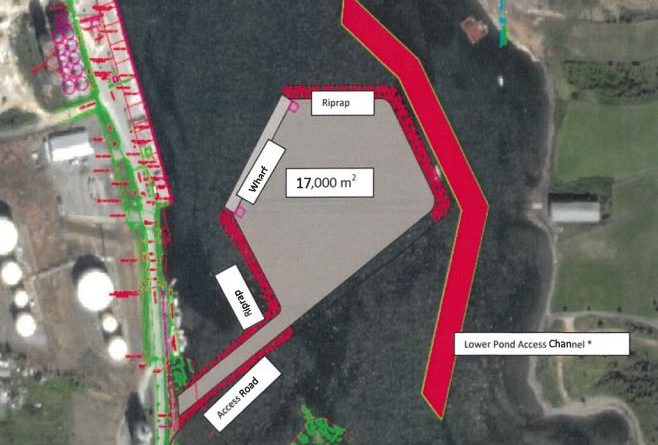 An application to the Town of Conception Bay South will potentially see some work coming to the Long Pond Harbour.

Back in 2018, a waterlot owned by the Harbour Authority was purchased by Ocean Choice International.

Deputy Mayor Richard Murphy explained that Ocean Choice International (OCI) had actually been in talks with the town as far back as 2013. It was not until the 2018 purchase that things really started to roll, however. Murphy described the current proposition as a two-phase development.

Phase one includes infilling to allow for the development of new land, as well as a 90-metre commercial wharf. The second phase is still in the early stages of discussion, but Murphy said it includes the possible construction of a cold storage facility and an office building. But, he cautioned, there is no way to tell when this supposed phase two will take place.

“Basically, this is the early stages of a very long development process,” he said.

The Town has given the project approval in principle, subject to a range of conditions including that OCI obtain a land use impact assessment report. The town’s terms of reference for that document resulted in seven public submissions from people with something to say about the proposed project.

The Town also contracted engineering consulting firm Stantec to review the public input, and ensure all of the concerns were incorporated in the terms of reference, which OCI will have to address, Murphy said.

Council will also have the opportunity to review the documents, but that part of the process has not yet come into play.

“OCI is aware of the public’s concerns, and they seem committed to making sure those are addressed,” Murphy said. “This is far from a done deal. Now, of course, when a company the size of Ocean Choice International approaches your community with a proposal to establish their presence, and commence a big development, of course the Town of Conception Bay South, like all towns, is going to be interested. There are a lot of economic benefits.”

Currently, a channel exists in the harbour that allows for watercraft to enter and exit the harbour with relative ease through the lower portion of the pond, known as the Lower Pond Access Channel. That channel acts as a main thoroughfare for boats, as other parts of the harbour do not have quite enough depth. The proposed land development would fall in the center of that channel, but in a letter addressed to council written by Ocean Choice president, Blaire Sullivan, it is stated that a channel will be created around the newly developed land that will serve the same purpose.

“Any work that we carry out, either during the construction phase of the development or once we are operational, will be undertaken with the view of ensuring we minimize any potential disruptions to existing use of the area,” Sullivan wrote.

The significance of the harbour is also something that Murphy said the Town is taking into great consideration and noted that as time goes on, they aim to keep the harbour’s regular users at the forefront of their minds.

“This is a historic port that has been around for a long, long while. A lot of residents used it over the years, and many of them still do use it. All of those factors have to be taken into consideration before final approval is given,” Murphy said. “OCI is committed to that, they’ve said that. The Town is committed to supporting OCI along that road, as well.”
But Murphy added he has been hearing concerns from the public about maintaining the integrity of the harbour, worries that the channel will not be wide enough, and that the harbour will be significantly less usable by residents because of the development.

“We’re not in the business of, nor do we have the expertise, to determine the width and depth of channels for boating and oceangoing vessels … that stuff is going to be left up to the experts such at the Department of Fisheries and Oceans and various consulting companies,” Murphy said.

The infilling aspect of the work would allow for a new wharf that OCI could use to dock its own vessels – something that is currently not possible.

“They’ve assured, in going through the process, that the channel will remain as deep as it is now, if not deeper with no impact on business owners or recreational boaters in their use of the facility,” Murphy said. “In other words, they won’t be blocking access to the smaller wharves over on the other side … Of course, we are going to be monitoring it so make sure that that doesn’t happen.”