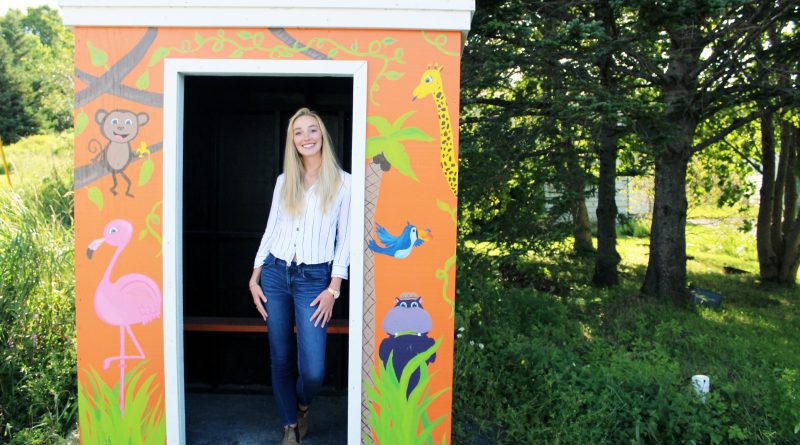 Anyone travelling along Conran’s Road in Lakeview might suddenly find themselves on safari.

A bus shelter, once plain orange with white trim, is now home to a whole herd of safari animals, and even a fish named Albert.

She had wanted to do a theme that kids would like and juggled ideas such as farm animals or ocean animals, all while trying to accommodate the shelter’s bright orange exterior.

“What’s orange? So, I thought safari animals. Orange has kind of a safari vibe,” explained Stone.

Part of the difficulty was drawing animals in proportion when drawing them on a large scale object, like the shelter; it would be easy to draw a head too small or a wing too big (though she jokes that the flamingo is larger than the hippopotamus, not a feat you’re likely to see in nature.)

Stone would do brief sketches and position the animals on the shelter before filling them in with color.

“The great thing about paint is if you mess up, you can just paint over where you made your mistake and redo it again,” she said, laughing.

And, as parents get ready to send their kids back to school in these uncertain times, with many teachesr, groups, and parents publicly decrying aspects of the back-to-school plan, Stone hopes the shelter will help brighten the schoolyear at least a little.

“Kids will be able to get some cute back to school photos at least,” she said.

Canada Summer Job students, like Stone, have been busy this summer in the Harbour Main- Chapel’s Cove- Lakeview area with recreation programs, clean-ups, and maintenance work.