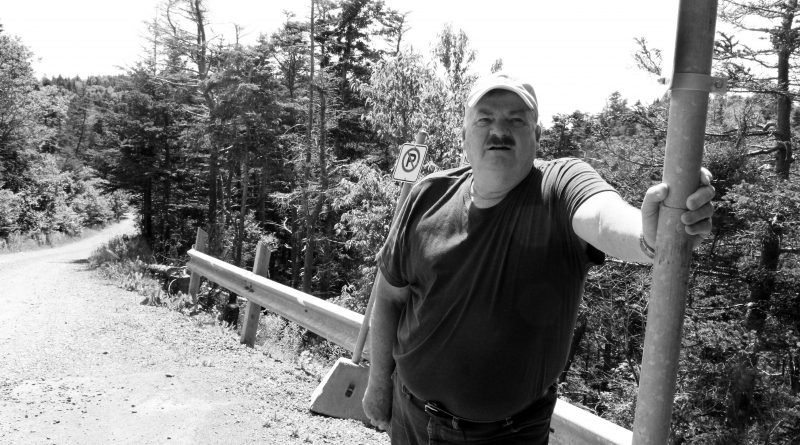 During capelin season, folks come down to catch the wriggling pelagics as they roll in. Others come for the spectacular views of Conception Bay and Bell Island, or to enjoy the sunsets as the rays touch down upon the water. Some folks use come to hike the East Coast Trail, as the Long Shore Path cuts through Laurie Road near the beach and continues on to Topsail Beach, while others come for the breeze and to dip their toes in the water on hot summer days.

The there’s the night activity. Aside from the usual litter of cigarettes and coffee cups that can be found in most public places, syringes are visible here from the road. Further in, a campfire, still sooty from recent use, sits in the middle of a densely wooded area. Nearby sits a pack of matches, on hand for next time. Discarded clothing, crushed bear cans, a tampon, and a whole suitcase full of clothes, litter the area – all just downstream from the Long Shore Path and upstream from where the river flows into the bay: a popular play area for children and families.

Whatever the reason people come to Laurie Beach, in the summer months many do come. Neighbours ruefully joke that in the summertime the road becomes as busy as Toronto’s 401 highway, though it is narrow, winding, and just wide enough for one car.

Tara Roberts has lived on the road for about three years, and said the traffic is at it’s worst on Friday and Saturday evenings.

“On a Friday or Saturday night, I could easily see 50 cars go down there over about a four-hour period,” said Roberts, who added that speeding is a major concern and that young people heading to the beach late at night aren’t going to enjoy the views.

“A lot of my issue is the speeding and the timing — people are coming late at night and blaring music. We had an issue Canada Day, and I’m all for Canada Day and fireworks, but it was about 2:30 in the morning and people were down there setting off fireworks, and our dogs jump up and are barking and our whole household is up at 2:30 in the morning,” said Roberts, describing the area as a “party zone” at night.

Roberts said the problem seems to be getting worse each summer.

“I feel like every summer, it’s a little bit more and a little bit more. Because a lot of people don’t know about the beach, but it is getting more well-known,” she said. “My husband has gone down after a couple cars here and there and saying, ‘Listen, you’ve got to slow down, we don’t appreciate it,’ and we ask them to spread the word to their friends.”

Roberts, herself a mother of a two-year old, said her family has experienced close calls with vehicles turning around a blind turn on the road much too fast.

Phillip Laurie, who traces his family name back to Paradise from before Paradise was even Paradise, and whose family has owned property on the road for decades upon decades, said the reckless use of the Horse Cove Beach by some has been a problem for years.

“As the day goes by, the children will go down, and when the even comes on, the wild crowd will go down. I’ve found needles down there. There’s a teaspoon down there, and they’re not making tea,” said Laurie — referring to how spoons are used to dissolve drugs such as heroin prior to injection.

“When I was a kid, if you went there, most generally you found Royal Reserve bottles, and Captain Morgan bottles and Dominion Ale and India Beer bottles,” said Laurie. “Now, you’ll see needles, and you’ll see blackened spoons. Now, I’m not an old fudie that I don’t know what’s going on down there.”

The residents of the small road are quick to offer potential solutions.

“I think people should be able to enjoy it, and a lot of people are there to enjoy it, but maybe have it only open during peaks hours,” said Roberts, who suggested the area could be gated at night. She also suggested that a speed bump, or even a blind turn sign, could help.

Laurie suggested that improving the condition of the road itself could help the situation, as he argued the road is quite dangerous.

“I would volunteer my time free. I know what has to be done with the road — I’ve seen what they did in the sixties. First of all, it needs a few culverts to take the water off the road. And it needs the alders cut back and the drains opened up,” said Lauire.

The beach is in the sightlines of the Town of Paradise to potentially be developed as a municipal park, as per the 2019 Paradise Open Space and Recreation Master Plan.

On an Open Space Summary within the plan, Horse Cove Beach received a 4 out of 5 in a Physical Condition Score (higher than the Town’s average of 3.8). The score is based on how clean and well maintained and free of hazards the site is. Along with Topsail Bluff, Horse Cove Beach was identified as a potential new community park. Recommendations included improving the visibility of the access road with signage on St. Thomas Line, repairing the potholes, widening the road, and adding seating, picnic areas, fire pits, and a shelter or shade structure, as well as better establishing the East Coast trail linkage.

“This is not a road to put a municipal park on. You’re creating Topsail Beach,” he maintained. “You cannot put a park on a road like this.”

Bobbett said the Town has hired Tract Consulting to investigate the beachfront’s potential as a park.

“And they’re going to get back to us with some recommendations for future use, and possibly turn it into a park,” he said. “Obviously, we’ve got a great piece of beachfront property there that the Town owns, and I think it would be a great spot for a park. So, the consultant is looking at all the data, all the history, and we’re also going to possibly do some public consultation as well, about what people would like to see in the area and what not.”

Should council decide to go that route, improvements could include park benches, picnic tables, more parking space, and road upgrades, as the budget allows, said Bobbett.

“Once the results are back from the consultant on how to move forward, then we’ll be looking at, obviously, budgeting for that for future years,” said the mayor, who suggested that Horse Cove Beach could easily be an attraction like Topsail Beach.

Bobbett said the beach area is already a major access point for the East Coast trail, which the Town partnered with a number of years ago.

In the meantime, Bobbett added, he himself recommended that Tract look at a gate to keep late night visitors off the beach.

“It would be no different than Paradise Park,” he explained. “We do have Paradise Park gated and it’s closed at certain hours. So, this is a piece we asked Tract Consultation to look at when they did their consultation piece. We would try to make it a better place to be, and a better place for the residents. We definitely want to enhance that area, and make it safe for everybody to use.”

Bobbett estimated that Tract Consulting will have their recommendations finalized in the next four to six weeks.