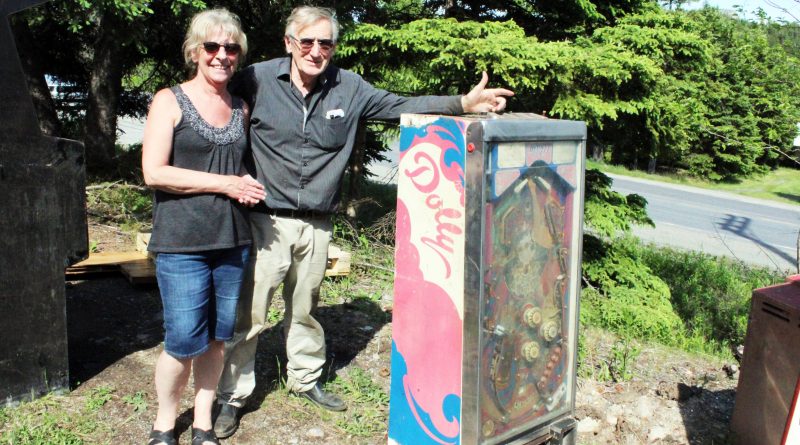 Bern Hickey says he should be in Las Vegas for the World Series of Poker right about now.

But, he’s not, because of the COVID-19 pandemic of course. So, instead, he’s home in Avondale, selling pinball machines and the like along the side of the road. And, he says, business is good.

“Everybody wants a pinball machine or a video game or a jukebox!” said Hickey, who has been involved in the province’s electric machine industry since the mid-60s. It was a case of being one step ahead of the curve, as in the early 1970s, the electromechanial switches and scoring reels were replaced with circuit boards and digital displays.

“In the 60’s all of these were mechanical, and in the 70’s everything switched over to solid-state electronics… So I was in the right place at the right time. Could have retired at 40,” said Hickey.

But now, the former Avondale mayor is selling off his collection of jukeboxes, video games, pinball machines, arcade games, and pool tables.

He had plans to sell them to a former partner in Montreal.

“This guy has a big shop set up with all these old games. It’s like going back in time,” said Hickey. “And they’re all new, and completely restored. So, I walk in, and he says, ‘Bern, what are you doing?’ And I said, ‘I’m come down to see if you’re still alive.’ He said, ‘I’m 84 and I’m still going strong. I’m restoring all these old machines. And I’m really doing well.’

The man had a collection of machines from across the Atlantic provinces — PEI, New Brunswick, Nova Scotia.

The plan was to send a tractor trail to pick up the machines — however, after the proposed buyer fell into legal troubles, the sale was called off.

So now Hickey is selling them off locally — which, he said, means at least that the machines stay within the province.

The sale started with just a few inquires from local enthusiasts who came by Hickey’s place on June 16.

“I had a few guys calling. And they came in and looked around,” explained Hickey. But the potential buyers wanted a look at some of Hickey’s wares still in storage.

Soon, Hickey had a yard full of colorful machines that recalled the 1970s the way Charlie’s Angels, the Dukes the Hazard, bell-bottoms, and disco do.

And, it was hard for motorists to drive by the retro machines without having a stop.

“So, this stuff is out in the yard, and people are stopping and buying it. It’s crazy! I’ve got another dozen people now that want machines,” said Hickey.

“A guy comes along and says, ‘I operated that machine in Grand Falls 30 years ago, I want to buy that,’ and another guy wants a Pac Man… It’s mind boggling. It’s actually mind boggling.”

Hickey said he’s selling the machines from about $600, give or take, depending on the machine and the condition, however, some machines may need repairs that could be that price or more.

And finding a handyman with experience in the retro machines could prove challenging.

“I bet in the province right now, I can name you probably two to three that are able to fix these,” said Hickey. “There’s a knack to fixing these machines. But you can still buy the internal guts for all of these machines still. Not from the original companies, but from other manufacturers.”

Still, it’s much cheaper than buying a new machine, which costs a minimum of $6,000, and can cost more than double that.

And, you might even be able to cut a deal with Hickey.

“I’ve got a guy coming this weekend, I’m exchanging two loads of tandem gravel for a jukebox. If someone wants to do a deal, I’ll do a deal.”

One thought on “The pinball wizard of Avondale”