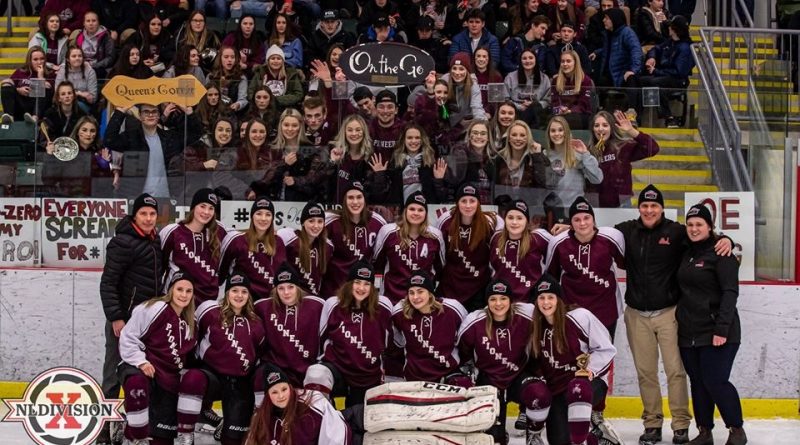 Queen Elizabeth Regional High School had to do things a little bit differently this year.

Every year, student athletes at Queen Elizabeth Regional High School in Conception Bay South are recognized for all their hard work at an annual award ceremony. Students and teams alike are presented with a number of different awards, including things like MVP awards, most sportsmanlike, and of course the male and female athletes of the year.

This year, however, due to the ongoing COVID-19 pandemic and the social and physical distancing restrictions set out by the province’s healthcare officials, the annual gathering that would usually see a sizable portion of the school population attending had to be moved to a different platform.

That platform was Facebook, where the school was able to go live to an audience and present the awards virtually.

Stephanie Walsh is a physical education teacher at Queen Elizabeth, and also served as the host of the virtual award ceremony. Walsh said that many were not quite sure how the ceremony would translate to a virtual version of itself, but was happy to report that the event went off without much of a hitch on either end.

Normally, the ceremony sees the school’s student body gather in the cafeteria where they can get a bite to eat and enjoy the event with their peers. Walsh said that she had been noticing other schools posting award winners online in various ways, and she felt as though Queen Elizabeth should be doing something as well to make sure the school’s athletes got the recognition they deserve.

“I wasn’t really sure what that was going to be. But, I had another teacher help me and what we decided on was a livestream of me presenting the awards, as we would do normally, and then a slideshow accompanying it with some team photos, the award winners, and all that kind of stuff,” Walsh said.

That livestream went up on Thursday, June 11 at 7:00 that evening, and Walsh reported there being an audience of, at times, upwards of 70 people watching at any given moment.

She said that although it was a new, and sometimes nerve-wracking experience, it also had some positive sides to it that they may try and carry over into next year’s ceremony. Even if restrictions are lifted by that time, and the ceremony can go ahead at school like it always has.

The biggest thing Walsh noted of the ceremony was the fact that, for the first time, family members were able to join in and watch as well.

Walsh explained that traditionally, the ceremony’s audience is made up of just students. By moving to a more open platform like Facebook, the students’ parents, grandparents, or any other family member or friend can hop online and watch as well.

As an added bonus, once the livestream had ended a recording of it was uploaded to the school’s page, giving those who wish to do so an opportunity to watch it (or re-watch it) at any time.

“Families were able to sit down and watch it together, and honestly I really love that part. To me, that made it really special,” Walsh said.

This year, Queen Elizabeth had a total of 15 sports teams. On an average year, the school would normally see a higher number, somewhere in the high 20s Walsh said. That lower number can be traced back to the virus, and the pandemic restrictions that saw schools across the province closing prematurely. For many sports, this meant the players did not even have a chance to start.

Ball hockey, ultimate frisbee, and baseball are among some of the sports that could not even get tryouts out of the way yet before the school’s closure.

Still, there were plenty of teams who did have time for their sport season at Queen Elizabeth, including three different girls’ volleyball teams, basketball, cheerleading and indoor soccer.

Each of those teams has individual awards. While not all the awards are identical across each sport, there are still plenty common ones; most spirited, most improved, and things of that nature are something the majority of teams were awarded for.

After making their way through each of the individual teams and their awards, School Sports Newfoundland and Labrador (SSNL) gives out sportsmanship medals for one male and female student at the school for top athlete of the year.

This year, those awards went out to Zoë Rowe and Alex Doody. But, Walsh explained that there was one award given out this year that was even more special.

“This year, we actually have a retiring teacher who’s been coaching at Queen Elizabeth for 29-years,” Walsh said. That teacher is Doug Crews, whose involvement in softball and hockey at Queen Elizabeth dates back well over a decade. This year, to commemorate his career at the school, Crews was nominated, and awarded with, the SSNL Regional Recognition Award, as well as the SSNL Coaching Service Award.

Overall, Walsh estimated the school gave out somewhere in the ballpark of 50 to 60 awards throughout the night.

Walsh said that having a livestreamed event proved to be a good way to work around the world’s current issues in the long run. Although, like most people in the province, she hopes that by next year things will be back to some kind of normal, she said they are not opposed to the idea of incorporating a virtual aspect to the award ceremonies of the future.

“Honestly, the fact that so many people watched that typically wouldn’t get to watch … I would definitely try and livestream it so that everybody; family, friends, whoever can join in and watch as well,” she said. “It’s a new, online world now. So, with that comes new opportunities like this. So I’d say it’s for sure something we’ll try and have as a part of the event next year.”

The various award winners recognized that night are as follows:

Rookie of the Year: Zander Dillon

Rookie of the Year: Lauren Rowe

Rookie of the Year: Cole Clarke

Rookie of the Year: Lauren Rowe

Rookie of the Year: Mackenzie Dawe

Most Gentlemanly and Effective: Linden Power

QE Female Athlete of the Year

QE Male Athlete of the Year