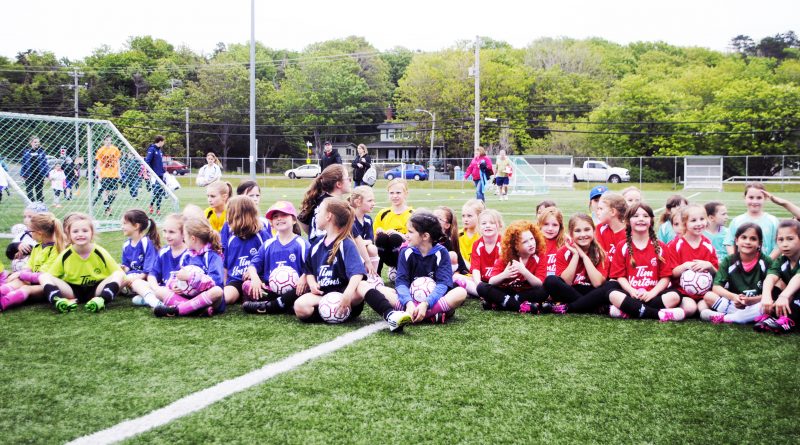 It’s been a strange few months for sports, but things are starting to bounce back for soccer enthusiasts in Conception Bay South.

After weeks of online training and virtual team-building activities, a group of players with the CBS Soccer Association finally met each other on the field again on Saturday, June 20. That, as the association’s general manager Darrin Bent said, was the first time the players had been together playing soccer in any capacity in just over three months.

Saturday morning at 10:00 a.m. saw the start of players returning to Topsail Turf, training together in a number of sessions throughout the day, which didn’t finish up until around 7:00 p.m. that evening.

Bent said the association wants to try and get each group in for training at least once within the first week, with training scheduled for Tuesday and Wednesday of that week to work their way through all of the individual groups that fall under the wing of the CBS Soccer Association.

That training, as Bent explained, is a little more complicated during a global pandemic than what players are used to. Players are being instructed in things like how to conduct oneself on the field.

“Normally, those things are no big deal, but in COVID times it’s a little more complicated than just showing up and kicking the ball,” Bent said.

The field itself is even a little different. With specific entry and exit locations, and plenty of signage regarding COVID-19 protocols, visitors will likely notice many changes that the association has had to put in place.

The signs will even guide members of the crowd to areas where they can and cannot sit. Since everything needs to be cleaned after each usage – even the soccer balls – Bent said it is important for these guidelines to be respected.

“Everybody who arrives at the field and is going to enter either the field itself or the stands has to go through a screening process and will be asked a number of questions regarding their health and travel. Just like you would at the hospital,” Bent said, adding that waiver forms are also a part of the screening process. “If they’ve got their waiver forms and passed the screening, they can make their way over to the field.”

On the field itself, there can be no more than 20 people including the players, coaches, and any other staff. However, since Topsail Turf is such a large area, groups of players that exceed that 20-person limit can be split up into two subgroups that each take up half of the field. Because of the field’s size, each of those groups can consist of up to 20 people.

With these protocols, and many more in place, Bent said that staff are faced with tasks they are not normally used to and will have to adapt over the coming weeks. The most obvious case is the requirement to clean all equipment after each use.

“It requires staff, and organization that we didn’t normally need for training,” said Bent. “In training the coaches would come, do their thing, and go on again. Even at the gate, we need to time everyone as they come and go. When someone leaves, we need to take note of what time they did leave. It’s a process, but by Wednesday night, everyone will have done it once. Everybody was great, too. Everyone followed the protocols, and honestly we were very pleased with the first sessions.”

The association’s technical director, Andrew Murphy, has devised some training plans that Bent said will ensure players remain at the proper distance from one another, adhering to the physical distancing rules set out by the province’s healthcare professionals.

“We want to be very careful about this, for the safety of not only our players, but their relatives and everyone, coaches, staff,” said Bent. “We want to make sure there’s a serious level of protection for everyone involved.”

Bent noted that as the province moves into alert level 2, some of those mask and glove-related guidelines may be eased for a select few people, but the association will continue to take the health risks of COVID-19 seriously.

Despite all this, Bent said, registration numbers are good so far. Although there are some people choosing to stay home and away from the field, he estimated around 90 per cent of the association’s player base is back.

While simple joys such as exchanging high fives are off-limits, Bent said many people are simply happy to be out of the house and back to something close to normal.

Once everyone is accustomed to the new protocols, the association hope to expand on the number of training sessions, and also return to the Sgt. Ted Nugent field in Kelligrews. For now, keeping the events in one area makes it easier to manage.

Although players were excited to be getting back to the field, this past Saturday would also have marked the kick off for the Association’s House League. That, however, has been cancelled for the time being. Bent said those programs cannot be properly executed while still following physical distancing guidelines.

Bent is hopeful that House League play will get underway again in the future.

“Even if it’s early August, we’ll still start if we can and run it into September,” he said. “We want to give the kids a program, so we’re not cancelling, we’re just waiting to see where things are … With things going rather well here in the province, we’re hoping we can actually have the kids go out and play some summer house league games.”

Since the province has released protocols for summer day camps, the association is able to offer its soccer fun camp again this year, which will be getting underway for seven weeks starting on July 7, albeit with some restrictions. The biggest of those is the numbers, as Bent explained the program usually sees around 30 kids each week, but this summer the limit will be 10.

“At the end of the day, we’d rather offer 10 kids a camp program than no kids at all,” Bent said. “Those are the two programs that we get the most questions about. Unfortunately, I don’t have any concrete answers yet.”