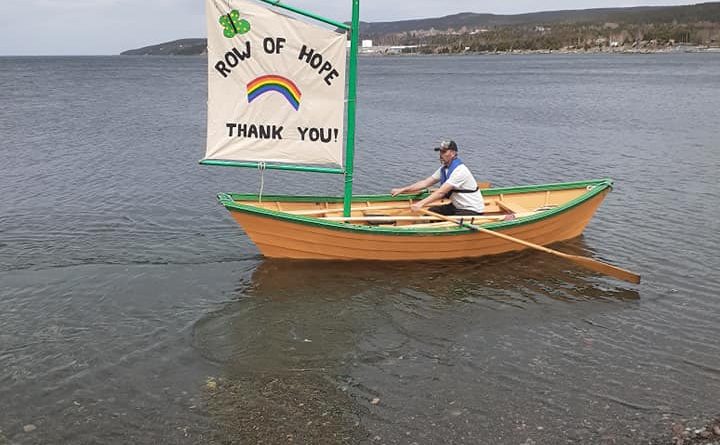 One man, one message, and one boat – that’s all it’s going to take for Clem Whittle to accomplish his newest goal.

Whittle, of Holyrood, has been an avid rower for most of his life. In the past, he’s gone off on a number of excursions in his boat with the intention of sending some sort of message, and has even been inducted into the Rowing Hall of Fame. His was the team that gained province-wide recognition for walking their boat from Placentia to St. John’s.

This time around, Whittle is taking to nearby harbours to spread a new message – one of hope and positivity.

Whittle says that with so many people in the province and country struggling with mental health issues, a global pandemic can be especially taxing.

Whittle himself says he has suffered through various things that he prefers to refer to as mind illnesses. At 63-years-old, he says he has experienced severe depression, anxiety, CPTSD, and has faced a number of different diagnoses over the course of his life. He says it has completely hampered his life, and although he has overcome many of his personal demons, he still recognizes the kind of toll that the pandemic and its enforced isolation can have on people.

Whittle’s Row of Hope will potentially see him travelling, boat tied to his vehicle, between a number of harbours around the province. There, he hopes to set for the open water and make his way around each harbour with a message of hope and positivity attached to his small vessel.

At another point in his life, Whittle admitted, were he to be faced with a global pandemic, he is not sure how he would have reacted. Now that his mental health has taken a turn for the better, he says his concerns lies with those who have not gotten better.

By sharing his message, he hopes to share his story in turn. He hopes it will give people a bit of extra hope that not only will this pandemic come and go, but so will their own personal battles.

“I want to be able to share my story as much as I can, because I know it can potentially help people who are struggling,” said Whittle. “Here’s what happened to me, here’s what I was diagnosed with, and here I am today after a lifetime of severe depression… I was on my couch, and I thought I was done… I wanted to know what I needed to do next to get through this latest hardship. But, the one thing I had, and the one thing I’ve always had, is hope. I have hope with me right now, and right now I know that things – bleak as they may look – can and will get better. That’s what I want people to know as well.”

The specifics of Whittle’s Row of Hope are still being ironed out, but as of right now, the plan is to visit as many harbours as he can with his one man dory, starting with the Avalon Peninsula.

That dory will be highly visible if Whittle can help it at all. He hopes to erect a sail, with a message of hope large enough that people will be able to see and read it from a distance.

This type of endeavour is not an entirely new idea for Whittle, who has done at least two long distance rows in recent history of 60-kilometres and 51-kilometres each.

Given that Whittle is living in Holyrood, and originally came from Placentia, those two locations are at the top of his list of harbours-to-row. Beyond that, he says his exact locations are still up in the air, and depend on things such as weather, and his own capabilities.

If possible, Whittle also hopes to record his excursions with a GoPro camera, with the intention of posting the videos online for those who would like to see each individual harbour up close.

With a lot of the province’s tourism shut down indefinitely, he suspects this will prove to be a popular offering once he gets it sorted out.

As for an exact start date, Whittle says that is also dependent on the circumstances at the time. The row will likely have to take place over the course of several days, and so Whittle is simply making sure his boat and equipment are all good to go for virtually any day the sun is shining.

“I believe hope is essential, and I’m doing this for people who are really struggling emotionally at this time,” said Whittle.