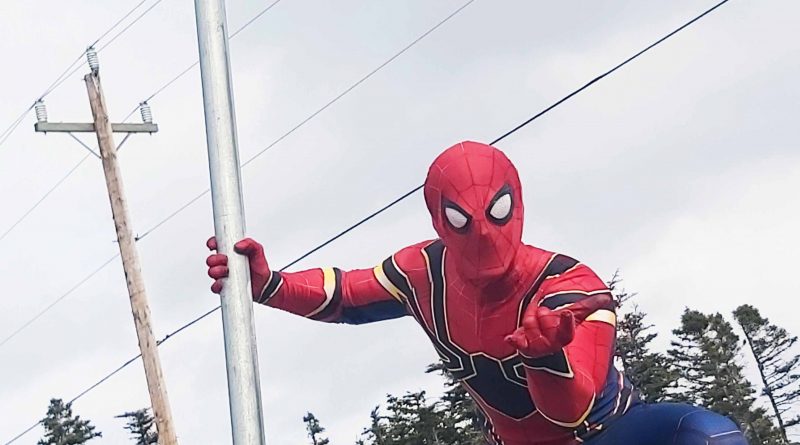 Spider-man can do whatever a spider can … even under quarantine restrictions, it turns out.

If you’re out and about in Paradise these days, or simply gazing out your window at just the right time, you may manage to catch a glimpse of Marvel’s superhero making his way down your street. That’s because the famous webslinger has given up the skyscrapers of Manhattan for the now melting mountains of snow to be found throughout Newfoundland’s fastest growing town.

It turns out, however, that this incarnation of the comic book and movie favourite is not the freelance photographer named Peter Parker, but rather Robbie Griffiths, an essential worker living in Paradise who, in his off-time, dons his superhero garments to pay special visits to those who need some excitement during the global pandemic.

He says by donning the outfit and making his rounds through Paradise as Spider-Man, he is not only making the local kids laugh and smile, but also effectively changing the conversation from the constant negativity he hears about the Coronavirus, and onto something a little more positive.

“I had this Spider-Man costume, and I got home from work one day and saw it was just laying there in the corner. I just wanted to change the subject a little bit here in the community, so I put it on and started walking some streets in Paradise,” he said.

Griffiths posted a notice on a facebook community group advising of his availability. “If there were any streets with a lot of kids who wouldn’t mind seeing Spider-Man walking past their house, I got people to drop their address in the comments (section) and I’d do my best to go by,” he said.

Within 15-minutes of starting his walk, Griffiths said his cellphone began buzzing nonstop as people reached out to him to try and get him to make a pass by their home. He said once he sat down in his car, he had somewhere around 200 messages with street addresses and special requests for birthdays and other events.

“It just kind of took off immediately, and hasn’t really died down yet,” he said, laughing. “I saw that people were enjoying it, and it was taking everyone’s minds off of what’s going on right now, so I just continued with it.”

Now, Griffiths spends whatever time he can – usually on his days off – dressed as Spiderman, making stops for people who message him, and greeting excited kids either from behind glass windows, or at a safe social distance.

Griffiths knows from first-hand experience that a visit from a superhero can do wonders for people faced with a difficult situation. A few years ago, his own son was in ICU for a period of time. As a father, he said it was difficult to think of anything other than that at the time, and so he wanted to try and shed some positivity for other folks with a lot on their minds.

To do that, Griffiths dressed up as Deadpool – another Marvel superhero – and paid his son a visit in the hospital. He said it helped take his mind off the situation, just as much as it did for his son.

“The situation that’s going on right now, it seems like a lot of people are struggling with it,” said Griffiths. “A lot of people are scared or nervous, and being able to take your mind off of it can be hard. I know this kind of thing has worked in the past, so I wanted to try it again. Everyone needs a break from everything, especially with their daily routines all thrown off. So, why not throw some Spider-Man into the mix?”

Birthdays have been an especially popular request for Griffiths. With the pandemic still in full effect, families are finding themselves confined to their homes, and avoiding social interaction outside. Those with young children are having to find an alternate means of celebrating birthdays, and a surprise superhero visit is a solid way to ramp up an otherwise lonely birthday party in isolation.

Among the celebrants has been Caleb Williams, who recently celebrated his eighth birthday. Caleb’s birthday was made especially exciting thanks to Griffiths, who made an appearance and even posed with him for a photo outside his home, the pair separated for safety but within a fun distance.

Although it has been a great bit of fun for Griffiths, he said that work and family come first, and those are the things he needs to focus on the most. Still, once the pandemic is over and everyone’s lives are back to normal, he doesn’t plan on putting the suit back in the closet forever.

“It’s really fun and I love seeing how excited the kids get when they see Spider-Man walking down their road,” he said. “So, it might be something I try and keep up with a little bit on the side once the pandemic is over … a birthday party here and there, or a special event that someone wants me to show up at, those are all possibilities for sure.”