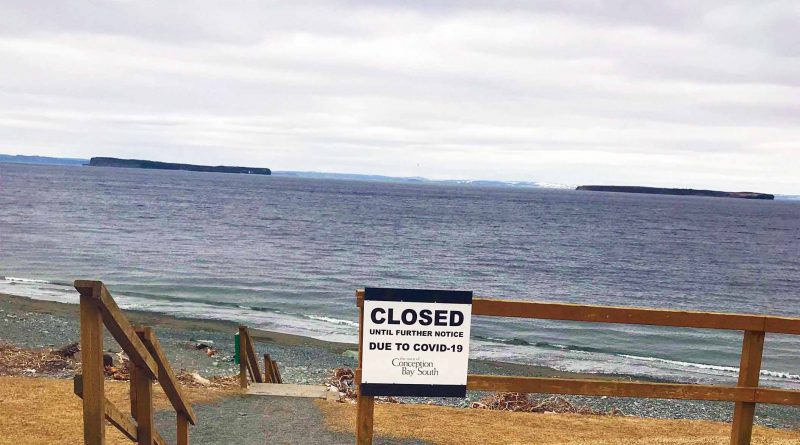 It killed him to do it, but Terry French says council had no choice when it came to ordering the closure of Topsail Beach Rotary Park on Monday.

The Conception Bay South Mayor said the move was in tune with the Town’s efforts to follow the guidance of the province’s Chief Medical Officer.

“We had closed all of our (other parks), and that was normal to close ball fields and soccer fields and even the arenas,” said the mayor. “But Topsail Beach to me is like an access to the beach more than it is a spot to do a lot of other things. And there’s something about the fresh air on the beach, you always feel like it’s good for you when you’re down by the salt water. So, we thought that it wouldn’t be too bad (to keep it open), because it’s only like a big parking lot. But then we got reports of people hanging out and talking window to window, which wasn’t good. And then when we got a bit of sun the other day the place was down there bumper to bumper. So, it’s another reason for people to congregate. It killed me to do it, because you want people to have access to the fresh air, but then you’ve got the Chief Medical Officer saying to stay home and boy, you’ve got to listen, this is serious stuff.”

French said he understands why people, especially young people, want to park on the beach and socialize. “It’s normal, we all did it,” he said. “It’s not a bad thing (normally). The unfortunate thing now is that we want them to be six feet apart. And I hate to lecture to that generation, because that doesn’t work. It was just a step we took to minimize people coming together. It’s certainly not what I wanted to do, but felt that we had to do it.”

French said people can still walk along the beach as long as they keep a safe distance from each other. Drivers are not allowed to park on the lot or along Topsail Beach Road leaching to the park. But they can drive the loop to turnaround.

Mayor French said the town’s municipal enforcement officers (MEOs) are constantly checking on the town’s facilities, including Topsail Beach. “We have no real authority to ticket, ” he admitted. But the MEOs can report incidents to the Royal Newfoundland Constabulary, he added. “So now where it’s closed they can give tickets for loitering, or whatever the case might be… They have the authority, once it’s closed, to remove people. And with the new Medical Emergency Act, there’s probably all kinds of things they can do if they’re too close together.”

Meanwhile, the town’s walking trails in other parts of CBS are still open, French noted. “We’re preaching physical distancing while you’re walking,” he said. “There’s no problem to do that as long as everyone is realistic and understands the importance of it. We’ve got to take the Chief Medical Officer seriously and we’re doing everything we can to support her and the federal and provincial governments who are, in my opinion, doing a good job with that they have and what they’re dealing with. The least we can do is play the game.”