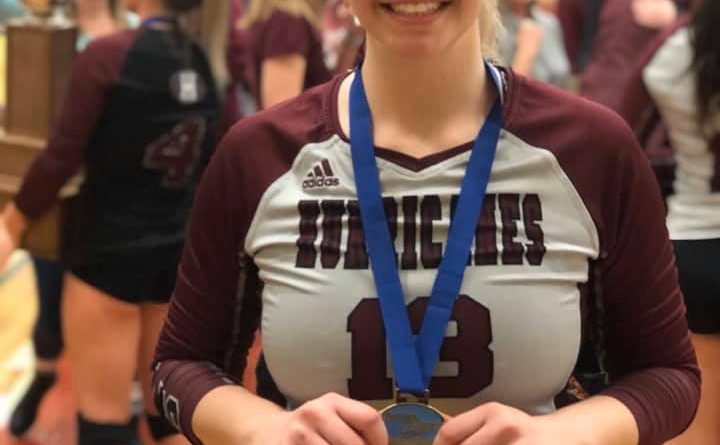 This Conception Bay South native is making waves in PEI.

Zayley Murphy was born and raised in Conception Bay South, but her legacy has been kicking off just across the waters in Prince Edward Island.

In the eighth grade, Murphy first stepped onto the court at Frank Roberts Junior High. It was there where she learned to love the sport, and would continue to play in the following years at Queen Elizabeth Regional High School, honing her skills and proving herself to be a force to be reckoned with in the local volleyball scene.

Those skills caught the attention of some watchful eyes from P.E.I. in her final year at the age of 18. Murphy was offered the opportunity to take her talents to Charlottetown, P.E.I. to attend Holland College, and play volleyball for the Holland Hurricanes. She accepted, and has been there for the last two years.

Murphy said that playing at a college level has introduced her to a number of new challenges, and has ultimately been an exciting change of pace.

“It’s a lot more competitive. I mean, you always want to win, but just to know that there’s such a big end result in winning a championship and getting to go to nationals to compete with even better teams … that pushes you to try and achieve more. So, it’s been very exciting,” she said of the experiences she’s had on the court over the last two years.

And, win they did.

This year, the Holland Hurricanes took part in the annual Atlantic Collegiate Athletic Association Championships. This was not a new endeavour, as the team has taken part in the championship each year for quite some time. This year was different in other ways, however.

Murphy and her teammates were able to claim first place in the ACAA championships – the first time the team has ever achieved this, making Holland College history in the process.

“Holland usually always makes it to the finals, but they tend to choke and have never won,” Murphy said with a light bit of laughter. “So, this was the first time ever that the girls won … It’s a great feeling to be able to represent our school in this way, because the school is kind of known to always lose in the finals and never be able to finish it. We’re the first team to actually make it that far, and show that we can do it. Really, it felt unreal.”

Now, the Holland Hurricanes are bound for the national competition in Quebec, starting on Thursday, March 12th. That competition will feature different teams from across the country, including Holland College for the first time.

In order to prepare, Murphy said that her and the rest of the girls have been watching game tape of the involved teams.

“We’re just getting familiar with the way they play because, well, we’ve never played them before or even seen them in person. So, the best we can do is watch those tapes to get familiar, and try to figure out what it is we can do to beat them,” she said.

Murphy’s love of volleyball is something she’s held onto since first giving the sport a shot during her years at Frank Roberts Junior High. She says the sport keeps her grounded, and couldn’t imagine achieving what she has without the opportunities she was presented with through the sport.

“Honestly, I just love the sport. It keeps me healthy, and sometimes it’s what keeps me sane, too,” she noted, laughter slipping through once again. “Plus, all the opportunities I’ve been given, I’ll never forget. I got to play in the Canada Games, and then I moved here to P.E.I. So, it’s really been a great experience.”

All that being said, Murphy did note, too, that she would not have been able to make this kind of progress without the constant support back home from her mother, Wendy.