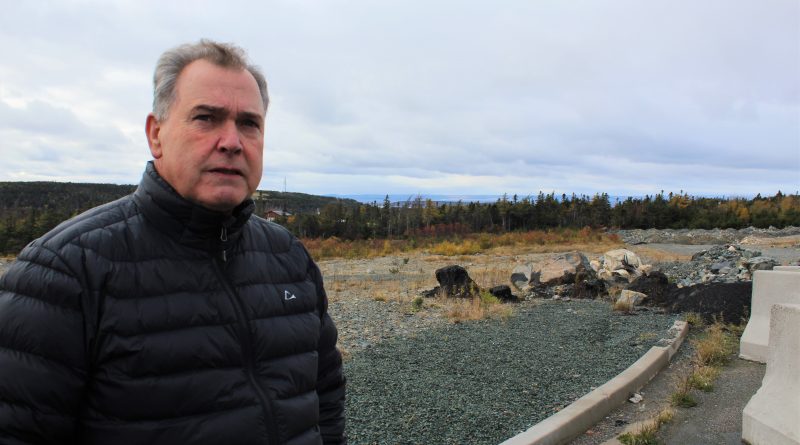 A facility proposed for Conception Bay South continues to worry nearby residents.

In July of 2019, the Town of Conception Bay South received a proposal from Canadian company Envirosoil, proposing that the Town be the host for a Drilling Mud Processing and Storage plant. Currently, the same facility is sitting in Bedford, Nova Sctoia, and if the proposal is accepted, will be packaged up and transported to Conception Bay South.

The exact location set for the facility is at the industrial park located just off Fowler’s Road. That location is where the concerns begin for residents.

“The industrial park was approved by the council of the day as a light industrial park, and since then, the zoning has changed for two businesses up there now on Hops Street … So, council is essentially going to have to change the zoning again to accommodate this mud plant, which is general light industrial. You’ll have these businesses sitting right next to each other, operating adjacent to each other. If they go ahead and do that, (council) will be compromising the integrity of the municipal plan that they’ve been working on and are trying to implement. You don’t want mixed zoning, especially three mixed zones on the same street, right next to each other, especially considering the nature of the hydrocarbon operation,” explained Shawn Clarke, who has been spearheading a group of concerned citizens from the area who are strongly against the idea of a drill mud storage and processing plant erected in the area.

That being said, the group is not opposed to the facility entirely, and instead simply want to see the building constructed elsewhere in the town, where it does not effect the livelihood of those living nearby.

Ultimately, Clarke and fellow residents consider the proposed facility to be a major health concern, especially for the seniors living in the area who are facing a plethora of health issues across the board. Clarke says that the facility will only make their health decline faster.

In order to analyze whether or not the facility clashes with the needs of nearby citizens, Clarke says there are a series of tests that need to be carried out, including a hydrological proliferation study, which will come up with a profile to determine what happens in the event of a sudden release – what happens if the product being stored and processed gets into the local waterways.

“How far down does it penetrate? In which direction does it flow? What’s the impact upon the wellwater? What’s the impact upon the Manuels River ctachbasin, and the Manuels River rail system, the fossils? But, health is first and foremost. Otherwise, we would not be beating this drum,” said Clarke, who has worked as a professional emergency manager prior to retirement.

“I understand very well that with light industrial, I can sleep at night. When you put a hydrocarbon operation there, not so much. The sign is still up there now that says ‘light industrial,’ though.”

In October of 2019, only a couple of months after the proposal was received by the town, a public information session was held where residents could raise any questions or concerns they had regarding the proposal, with some 30 people showing up to speak their minds.

Since then, the Town has worked alongside both Envirosoil and the concerned residents in trying to come to a happy conclusion. This even included a trek to Bedford by some of Conception Bay South’s councillors and staff to have a look at the facility in operation in Nova Scotia.

Most recently, a report was produced by Stantec Consulting that looked into various aspects of the facility, and aimed to address some of the concerns that have been voiced in the months following the proposal.

“Are there issues with hydrocarbon products and these types of processes in relation to proximity to nearby residential, commercial and light industrial uses?” reads the first question addressed in the report, which found that there may be three main concerns to those who find themselves in the vicinity of the plant; the release of hydrocarbon vapours, the storage and handling of combustible products in a process facility, and the release of liquid product from the site.

That, among 15 other concerns were outlined in the report that was commissioned by the Town.

Max Trask is another resident of Fowler’s Road who has aired his concerns about the project. He told The Shoreline that, while the report did serve to provide some further information, those who find themselves opposed to the facility are still not on board, and that the report did not serve to fully answer many concerns.

“At the end of the day, after looking through the report, our questions that we raised about the need for more studies have not been resolved. Though we have some appreciation for the fact that council commissioned the report in the first place, at the end of the day it does not take the issues away from us. It doesn’t really deal with anything,” he said. “For example, a big concern was pollution. Another concern was with the neighbouring people, and their well-being.”

In an effort to get their voices heard, Clarke put together a petition that urges council to reject the proposal.

Envirosoil has, since sending out the proposal, suggested that they are prepared to build the plant at an alternative location should the initial proposal get rejected by the town, and that they are in negotiations about purchasing this alternate parcel of land from the owner. The company has not come out and said whereabouts this land is located in order to protect the landowner’s privacy.

Clarke’s petition, in recent weeks, has been building up steam, making that rejection a bit more of a reality as days go by. At the most recent meeting of council in Conception Bay South, ward one councillor Darrin Bent presented Clarke’s petition to council again.

“Their concerns include that the comparable plant in Nova Scotia, the exact same one that’s proposed to move here, is 0.6-kilometres away from residents. Here, it’s within 0.2-kilometres of residential homes. In Nova Scotia, it’s located at the centre of a large quarry which further offsets any possible environmental concerns. That’s not the case here,” Bent said during the March 3rd meeting. “The residents have concerns with regards to the final report from Stanttec, that there are still some open questions they do not have answers to, such as the fugitive emission air dispersion study. Stantec notes that it can’t answer some of the concerns unless that study is done. That’s something that council may want to do, or wait and see if that’s a part of the environmental assessment by the province.”

At the time of that meeting, the petition had amassed some 117 signatures. Clarke, Trask, and others are continuing in their efforts to spread their message of concern, and hope to bring the petition back to council at the next meeting on March 17th. By then, Clarke says they hope to have another 40 or so names attached to the growing list.