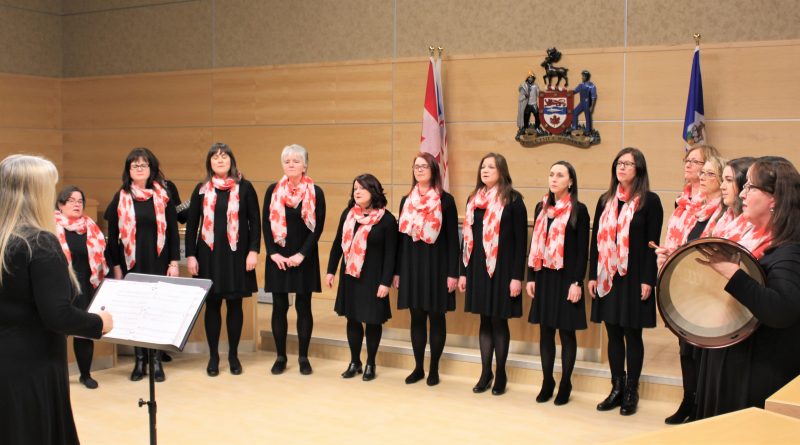 This coming April will present a big opportunity to a local choir.

Avalon Voices is a women’s choir based out of Conception Bay South, directed by Keri Kao of Musically Inclined. This year will mark the group’s tenth year in operation, and they are hoping to celebrate the anniversary by taking part in something special.

That something special is a North American choral festival – Choirs of America: Nationals for Top Choirs in New York, taking place this coming April.

This will be the Avalon Voices’ first time travelling outside the province to take part in such a competition, and Kao says it will be a fitting way to commemorate 10-years of singing together.

“I started researching online, looking for a nice festival, or just an experience for us to have. This one kind of jumped out at me because you get the opportunity to perform at Carnegie Hall. That’s such an amazing opportunity, and is such an iconic place,” she said.

The choir had to apply with a video submission of their vocal talents, meaning there was no guarantee that Avalon Voices would be picked to take part. But, they were, and Kao said the group could not be more excited.

The choir, whose current lineup features 16 different singers, ranges in age from early twenties to women in their sixties. Kao says they welcome anyone from the area to come join in the singing, given that they are at least 18 years old.

She also added that the group tries not to limit itself to one specific genre, having tackled songs in the realms of folk, broadway, and even pop and classic rock, singing in a three-part harmony. However, whilst taking part in the Choirs of America competition, Kao said the group wanted to show off their Newfoundlander roots with the songs they sing for the American audience.

In taking part in the Nationals for Top Choirs, the groups are given the freedom to make a setlist of their own and perform songs that properly reflect their skills. The choirs will be adjudicated individually, but also take part in choral exchanges, where the choirs sing for one another.

For their own song choices, Avalon Voices decided on singing Woman of the Island and Sarah, Welcome to the Rock, and Daughters of Newfoundland which written by Maureen Ennis and Harry Chafe, who granted the choir permission to use their work. For that song, sheet music did not actually exist, and so Kao and fellow choir member Lisa Power transcribed the music to fit a three-part harmony choral rendition.

“We’re using this as an opportunity to showcase our province. We want to represent Newfoundland, and our culture, and that’s why we chose to do all Newfoundland pieces,” Kao said of their four song choices. “We wanted to do Welcome to the Rock from Come From Away, because a lot of New Yorkers are familiar with that since it’s so big on broadway right now.”

After performing their own setlist, the choir will join every other choir taking part in the festival for a full scale performance at Carnegie Hall, with songs selected by the festival itself that the choirs will be preparing for in addition to everything else.

Kao says that although it can be difficult to switch up styles like this – going from traditional folk to classical performances is not a simple task. However, given the range of music that Avalon Voices has been practicing over the years, she said that the feat is a little less daunting.

“We also compete in the Kiwanis Music Festival every year, so we’re kind of used to what the expectation is in that type of music. A lot of our singers, too, do have that type of experience with music in the past. So, yes, it can be a challenge because it’s not music we’re used to, but they’re doing very well with it so far, and we’re definitely enjoying it,” Kao said.

Preparing for this trip has been a lengthy process. Three years, in fact. Over those three years, the group has been doing various fundraising efforts to try and gather up the necessary amount of money to be able to send all 16 women to New York, on top of all the other expenses that come along with such a trip.

The biggest fundraiser they have is a St. Patrick’s Day concert, the third of which is coming up this month.

On top of these efforts, the choir was also fortunate enough to receive a grant from the Bruneau Centre for Choral Excellence through Memorial University graduate program.

“They had a long list of criteria to be eligible for this grant, and we were lucky enough that we matched everything they were looking for – community choir, promoting our culture, things of that nature.”

Avalon Voices is bound for the big stage in New York this coming April, on the 22nd, but their annual St. Patrick’s Day concert and final fundraiser will be going ahead on March 13th at 7:00 at the Legion in Kelligrews.