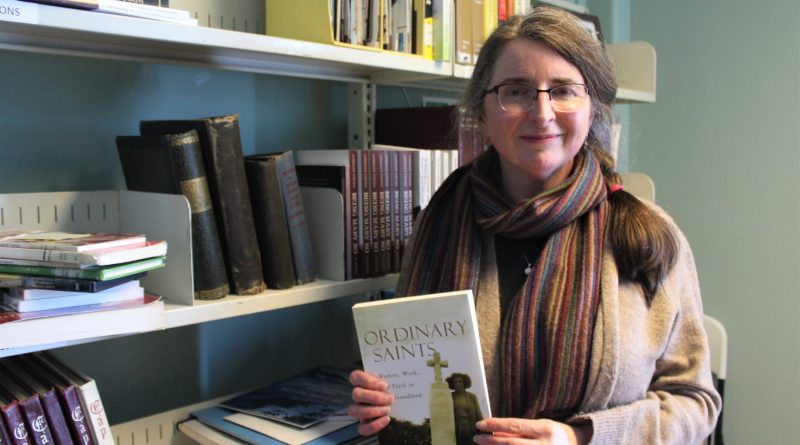 The spiritual lives of women in Newfoundland’s past are the focus of Bonnie Morgan’s newest book.

Ordinary Saints was written with the intent of shedding light on the unique lives of religious women in Newfoundland, and the often difficult, but rewarding work they found themselves involved in.

The author, Bonnie Morgan of Seal Cove, began writing it as a doctoral dissertation, but it soon evolved into a book.

It’s genesis started over a decade ago, in 2005, when Morgan was doing research for St. Peter’s Anglican Church in Conception Bay South for the building’s 100th anniversary. She came across a bundle of records, in which she found some documents that she described as the starting point of the project, when she realized just how rich of a history there was regarding ordinary women, and their religious lives, in Conception Bay South.

In writing about faith, and the role it played in the lives of Newfoundland’s women throughout the 20th century, Morgan said she hoped to honour the generation of her grandmother, and even her mother, who lived lives that had a very strong connection to the church.

“I knew that the work had a deeper meaning than things like fundraising. (I knew) that there was a religious motivation and devotional motivation behind the things they were doing. I wanted to explore that more, and try to understand it better,” she said.

The research proved to be a sizable task, and in order to see the book become what it is today required a lot of time inspecting into old records, saved over the generations by those affiliated with the faith.

Starting her doctorate in 2009, Morgan had a year of working in her field, followed by a year of research, followed again by a full calendar year of writing.

After obtaining her doctorate in 2014, Morgan put her dissertation aside.

“So, the manuscript just sat there for a bit. My husband would say to me that I should really submit it to a publisher, but I never did. But, in 2017, I decided to go ahead and submit it, just to see what they thought of it as a proposal,” Morgan said.

She sent it to McGill-Queen’s Press, which has a series focusing on religion topics in Canada.

McGill-Queen’s Press was very much interested in what Morgan had to offer, and she says that reassurance was a big step in moving forward with her original goal, which was to take an academic document such as this, and turn it into something accessible to the general public, as a way of spreading information that may otherwise be lost to history.

Morgan said that one of the most difficult tasks when it came to converting an academic document to a source of every day reading was the writing process itself.

Taking academic jargon and reforming it into plain English was a task all on its own.

“When I was re-working the manuscript, I’d take out a lot of the really heavy, technical descriptions of things and tried to focus more on women’s voices, and the women’s stories,” Morgan said. “That was a big part of what I wanted to do right from the beginning. Right from the start of my doctorate, I wanted women’s voices to be the focus of this work, and that’s why if you go through it, you’ll see that I really made an effort to respect those women’s voices of the time, that’s whether it was during oral interviews I did with them, or the voices I discovered in documents.”

Morgan’s undergraduate work was in history and religious studies. For her masters, she studied the Anglican church as an institution making a comparative study of St. Mary’s Parish and St. Thomas’ Parish in St. John’s, looking at class, gender, and how they affected institutional developments within those parishes.

In studying those subjects, Morgan found herself with a deep interest in the religious experiences of regular, run-of-the-mill people of the various time periods.

“It’s one thing to look at the church from an institutional perspective, but there’s also the people within those churches, and what their personal beliefs are, what their way of expressing religion is, and it’s often very complicated,” she said. “There’s sometimes this idea that only certain people are theologians, this idea that theology is a formal, academic thing that you study at a university. It is, of course, but there’s also an understanding of theology as any thinking of a god, and people’s personal relationship with that god. That’s really what I’m interested in because it’s easy to think that going to church and worship is just this dogmatic set of beliefs, but I’ve always understood people’s faith to be really complicated. It brings together a lot of different ideas and perspectives, and that’s what I wanted to capture with this book, especially with working, rural, women.”

So, Morgan set her sights at home in Conception Bay South. She said those same women who are at the forefront of her book are often overlooked, or simply unable to be studied, because there is a misconception that they did not leave behind much to be studied.

That misconception goes even further, with many working under the assumption that writing letters, keeping journals, and working on documents was something done by urban women in cities, or just well-to-do people.