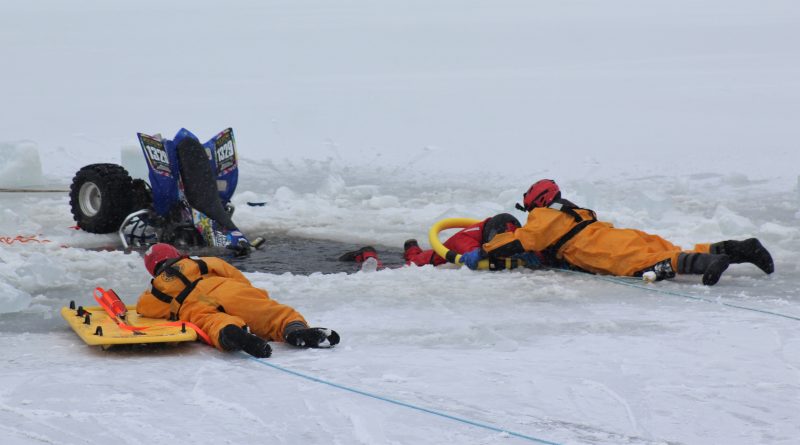 Someone had to be hauled out of ice cold water in CBS last week – twice in a row, in fact. But thankfully this time emergency responders were already on hand to preserve the victim’s life. That’s because it was a training exercise to hone rescue skills and educate the public about the dangers of travelling over ice in winter, whether by foot, snowmobile or ATV.

The demonstration featured members of the Conception Bay South Fire Department, the Royal Canadian Mounted Police, the Royal Newfoundland Constabulary, Rovers Ground Search and Rescue, Central Avalon Ground Search and Rescue, and the Avalon T’Railway Association, all working alongside one another to enact a display that could potentially save lives.

CBS Deputy Mayor Richard Murphy was on the scene as well. He recalled a tragedy that happened one winter some years ago when the weather was much like it is now, with plenty of snow and cold temperatures that led many to believe the ice was safe. It involved a young man whose ATV crashed through ice on Lawrence Pond.

“That’s why ice safety is so important. It can basically happen anywhere, at anytime,” said Murphy.

He was joined by current Fire Chief John Heffernan, Paul French with Rovers Ground Search and Rescue, Rick Noseworthy from the T’Railway Association, Alex Brennan from the RNC’s CBS detachment, and Sgt. Danny Williams from the RCMP who all took time to discuss the importance of knowing and understanding ice safety practices and the difference it can make between life and death.

One thing that both Murphy and Heffernan iterated is that ice is never completely safe, but that accidents, like the one staged at Worsley Park, are entirely preventable.

The Worlsey Park “accident” on Bubble Pond saw Rovers Ground Search and Rescue member Jack Hickey submerged in freezing water as firefighter Jeremy McDonald and F/Lieut. Andre Whitty came to the rescue, donned in protective gear and carrying all the right tools to haul Hickey out of the water and back to safety.

“Hopefully this will resonate with both individual ATV owners, and also parents of teenagers who are 16 or older who venture out on their ATVs. This time of year, just have that conversation with them so that they understand where they’re going, and what their intentions are,” Heffernan said.

However, one thing that was made plain by the emergency responders was that a rescue of the kind staged last Wednesday morning is rarely as simple as the real thing.

At Worsley Park, the “victim” was only a few hundred metres from shore, in an easily accessible location. Things can go much differently when the victim is stranded in waters that are kilometres deep into the woods.

“It’s easy to drive here and haul the stuff out maybe 50 or 100 feet, but it’s quite a different story when you’ve got to go thee or four kilometres into the back country with all this equipment,” said Paul French of the Rovers Ground Search and Rescue. “That’s done either by huffing it with snowshoes, Argos, helicopter, whatever resource is available at the time to get the equipment into the scene, and be able to do the job. When you’re sitting in a hole of water like that after going through the ice, that can really feel like a lifetime.”

This year, French noted, ice making conditions along the Avalon have been sporadic. He cited images the crew had taken of Bubble Pond via a drone, which showed the pond as being much less frozen than one might think at first glance.

Instead of being one big frozen sheet of ice, French said, Bubble Pond actually consisted of multiple slabs of ice.

Noseworthy, of the T’Railway Association, said that while ice is never something one can fully trust, there are things that people can do to prevent fatal situations, and that being prepared for the worst is the best way to come out alive.

He said planning is key, and that in most situations, you’re going to need to be able to rescue yourself.

Noseworthy detailed the 1-10-1 principle – one-minute to get your breathing in order, 10-minutes of usable muscle energy while you’re in the water, and one-hour to get warm and dry once you’re out of the water before hypothermia begins to set in.

“It’s nice to have something like a life jacket. If you go out in your boat you wear a life jacket, and if you go out on the ice, you should have some sort of floatation device as well,” Noseworthy said. adding that ice picks are one of the most important tools you can carry when traversing a frozen body of water. “You’re going to be tired, the ice is going to be slippery, and so you’re going to need (ice picks). The big thing is, you need to be able to self-rescue. All of this equipment is fantastic, but when you’re 12 or 13-kilometres out in the woods, the best case scenario it’s going to be an hour, an hour and 20-minutes before (first responders) can get their gear to you. You need to be able to survive, so it’s very important that everyone be thinking of self-rescue, to have a plan, go with a partner, and make sure both of them know that plan.”