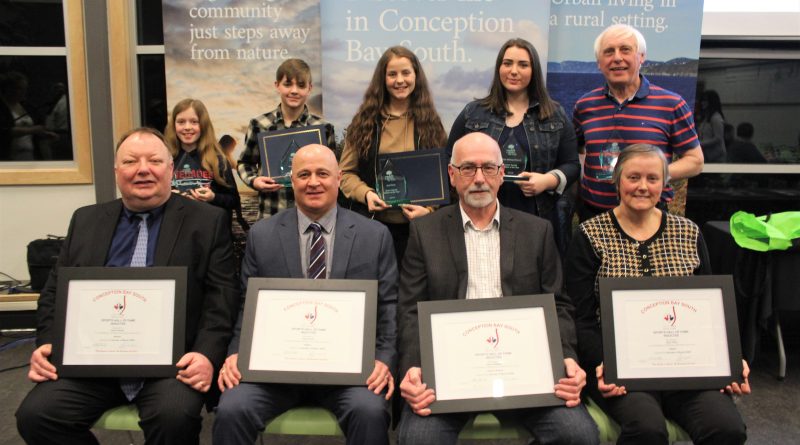 The Conception Bay South Sports Hall of Fame has some new additions.

The Junior Female and Male Athletes of the Year awards went to Hope Bishop-Frizzell and Evan Pearcey, respectively.

Bishop-Frizzell is involved in a number of sports including volleyball, the sport in which she and the rest of her Frank Roberts Junior High team won the regional and provincial championships, where she went on to be chosen for a spot on the 709 Selects team.

She is no stranger to the baseball field, either. Bishop-Frizzell plays with the 16-U Girls St. John’s Capitals, the 18-U Girls Capitals team, and the 16-U Girls Newfoundland team, and has a number of championships under her belt.

Bishop-Frizzell was the only girl on her school’s Grade 9 team, and continues to prove her effectiveness on the diamond as a top pitcher for the CBS Bantam AAA team with Queen Elizabeth, helping the team win the AAAA regional championships.

Pearcey, meanwhile, is a dedicated soccer player, filling a major role on the 13-U boys provincial soccer team as he aided them in taking home the Atlantic Soccer Championship.

Pearcey’s home team, the CBS Strikers, made it to the provincial finals and won silver, earning a berth in the Club Atlantic Championships. Pearcey has also taken part in the White Caps training program, which can lead into the Vancouver White Caps High Performance program.

Pearcey’s athletic skills extend to hockey as well, as he proved his worth on the ice on the Bantam B CBR hockey team. He also took part on the Villanova basketball team, earning himself a number of Player of the Game awards.

Rowe was a lead scorer with the Newfoundland and Labrador Soccer Association’s 17-U Girls provincial team, going on to be recruited by the Memorial University Seahawks, with a full scholarship for her athletic and academic performance.

Rowe is a familiar face at Queen Elizabeth Regional High, where she plays ice and ball hockey, badminton, softball, and basketball.

This year, she was honoured at her school by being named Athlete of the Year – something rarely awarded to level II students.

Doody, likewise, has a strong presence at Queen Elizabeth Regional High School. He plays for the Pioneers, and has been named Captain of the team this season. Doody has also played on the AAA Midget St. John’s Maple Leafs and the CBR Jr. Renegades.

For his talent in ball hockey while playing for the Pioneers, Doody was awarded MVP, and earned himself the Most Sportsmanlike award. He has played for Team Newfoundland and Labrador, and Team Canada’s 18-U ball hockey team.

Eric Hart was named Coach of the Year.

Hart has played a pivotal role in the local Special Olympics, and serves as the head coach for the Special Olympics Table Tennis and Softball programs. Hart has also been involved with the Canadian Inclusivity Squash Program since day one, being the first person in Canada to establish a squash program geared towards people with developmental disabilities. Wheelchair squash, too, is a big focus for Hart.

Connors earned his spot in the Hall of Fame for his role in the local minor hockey scene, travelling by bus on Friday evenings and Monday mornings in his early days as an athlete to play hockey in St. John’s, given that there was no arena in CBS at the time. It was not until the age of 17 that Connors turned in his stick for a coach’s whistle – a role he continues to fulfill today.

As a coach, Connors has been involved in every level of minor hockey, both male and female, from squirt to midget, and has a number of successes under his belt, including being coach of the only team from Conception Bay South to win a gold medal at the Newfoundland and Labrador Winter Games.

After picking up refereeing in the late 1970s, Connors was one of the original members of the CBS Referees Association, officiating in a number of leagues throughout St. John’s and CBS.

Connors has also been involved in minor softball and baseball in CBS.

Mary Tilley was also heavily involved in hockey. As a girl she played on the boys’ hockey teams, due to the lack of any girls’ teams at the time. She has a long list of successes in golf, rowing, running, soccer, softball, swimming, taekwondo, triathlons, and of course, hockey.

Tilley also served as a fill-in for the boys’ softball teams when there were no other players available in the outfield.

Eventually, a girls’ all-star softball team was formed in Conception Bay South, and Tilley brought home a silver medal as a part of that team in the 1980 Summer Games in CBS.

Tilley got involved in the local senior ladies’ softball and soccer teams despite only just barely meeting the minimum age requirement of 14-years-old. She earned a championship win, two rookie trophies, and the top goalie award.

To this day, Tilley continues to play hockey in the Eastern Edge Hockey League.

Chris Peach was inducted as an athlete and builder.

Peach is a lifelong hockey player, and an alumni of the Queen Elizabeth Pioneers, having won Athlete of the Year in 1989 and 1990. In 1989, Peach went on to kickstart his professional hockey career after joining the Summerside Western Capitals in the Maritime Junior Hockey League, playing with them for four years and becoming one of the league’s all-time highest scorers.

The next three years were spent playing with the University of New Brunswick Varsity Reds hockey team. There he won the Atlantic Club Merit Award of Excellence in Sport, and helped the team win two division titles.

Peach played a number of seasons of professional hockey throughout North America and Europe over the years, totaling 570 games, and earning 238 goals, 265 assists, and 503 points overall.

Retiring from professional play in 2005, Peach returned to the province to play for the Deer Lake Red Wings, the Grand Falls Cataracts, and the Western Royals, winning three west coast senior league championships, and representing the province twice in the Allan Cup.

The fourth inductee, Dean Williams, has been a figurehead in the Newfoundland softball scene for a number of years.

Williams got into the sport in CBS after joining up with the local minor softball league in 1966. He was a member of the same team that would go on to win the provincial minor softball championships – a first for a team from CBS.

Williams eventually went on to play in the senior league, and continued this until 1975. He played with Topsail until 1972, the Kelligrews team in 1973, and won the league championships while playing with the Topsail Aces in 1974 and 1975.

Williams earned a plethora of awards during his career, including most home runs, most doubles and triples, most stolen bases, highest batting average, and most gentlemanly and effective player. He was also an organizer with the CBS minor softball league, looking after players from Topsail to Seal Cove, and filled a number of executive roles in the league.

Williams also served as a coach, earning the Coach of the Year Award in 1985 in the Conception Bay South Senior Softball League.

One thought on “Multi-talented Mary Tilley enters Hall of Fame”