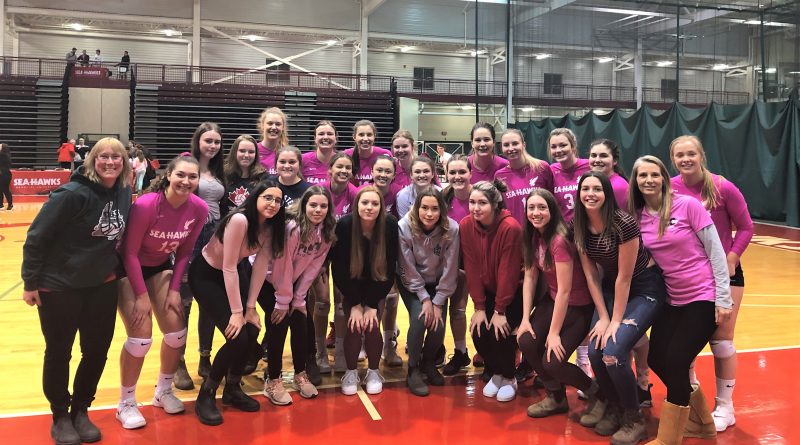 Five local sports teams are making their way to the mainland to represent the province in two different volleyball tournaments.

All five girls’ teams are part of the CBS Volleyball Club. The tournaments, in Edmonton and Halifax, are being held under the auspices of Volleyball Canada.

The national tournament is held every year, featuring 14-U to 18-U boys and girls teams from all over the country. While host cities rotate every year, this year’s tournament features two separate provinces. This is because this year’s Super-Nationals – for ages 16, 17, and 18 – will be in Edmonton, whereas the regionals for the 14 and under teams are set for Halifax.

The tournament is a massive event, with some 169 teams in the 15-U girls category alone.

Jillian Lahey and Aaron Aikens both help run the show behind the scenes of the CBS Volleyball Club, and explained the opportunity to take part in such a wide-scale tournament is exciting, but also not the easiest thing to get into.

“Everybody wants to go, so it can be tough to get in,” Aikens said, with Lahey later noting that registration for the event opens and fills up in less than 10-minutes.

“If you miss that registration, you get waitlisted and there’s no guarantees that you’ll get in … Last year, there was another team from Newfoundland that didn’t get in because of that,” Lahey said. “So, we don’t book anything until we know we’re registered. It can be expensive and a stressful process sometimes. But, we got our teams in, so we’re happy.”

Last year, the club sent two teams to the tournament. This year, they’ll be sending five, consisting of the 14-U Mavericks, 15-U Titans, 16-U Wolves, 16-U Falcons, and the 17-U Huskies.

The two said that last year’s tournament was such a fun and exciting experience that it was an impetus to send more teams this year. In 2019, one of the CBS teams ended up in the Tier-1 games, just barely missing out in the quarter finals.

“I think, last year, we kind of exceeded the expectations that people, even local people, had for us,” said Lahey. “So, that was good for the girls, especially coming out of a tournament like this where you’re playing a lot higher caliber ball. For example, there was a team in Montreal that wanted to stay in touch with us, and possibly play us again in the future. It was rewarding to hear that, and not to mention just a ton of fun in general.”

With so much growth in the club over the last year, Lahey said they could have easily sent even more than five teams this year, but the space just was not there to accommodate it.

To prepare for this level of tournament, both Aikens and Lahey said the coaches and players are doing what they can to reach the right level of play, and develop the right mindset, before leaving the province in May. But they also want to make sure the players are not feeling overworked, or exerting so much energy that they get burnt out.

To maintain that balance, the club follows Long Term Athlete Development Model (LTAD) to ensure its players are developing their skills without feeling the need to put things like schoolwork to the side.

“We don’t believe in over-training, especially with these age groups,” Lahey said. “They’re still in junior high, and volleyball should not be their only focus. So, our club teams are all going twice a week on the court, and some of them might take it upon themselves to spend another night each week focusing on overall fitness. We’ll bring in some guest coaches sometimes, and we’ll bring in a dietician or nutritionist. We’ll even do some yoga with them, and last year we also did some mental training. Not everyone bought into it, but those that did, you can tell that it benefited them.”

Aikens said travelling and experiencing volleyball outside of their home province plays a major role in the development of the athletes. By attending tournaments like this, he said, it gives the players perspective into how much they have improved over the course of their volleyball careers, which may sometimes be difficult to see when only playing against local players time and time again.

“They work as hard as they can as teammates. They improve, and go away and they’ll see then how far they’ve come,” said Aikens. “The end-game here is the nationals, but the fun and excitement of it is seeing these young athletes developing, having fun playing the game, and learning about the things they can accomplish through hard work … They become something that they may not have thought they could ever be. Myself, going through, I was never at an elite level of play, but it was still so much fun. Some of the most fun I had going through school was within a group, and so I know how beneficial these kinds of experiences can be. You contribute to something as a group and grow as an individual in turn.”