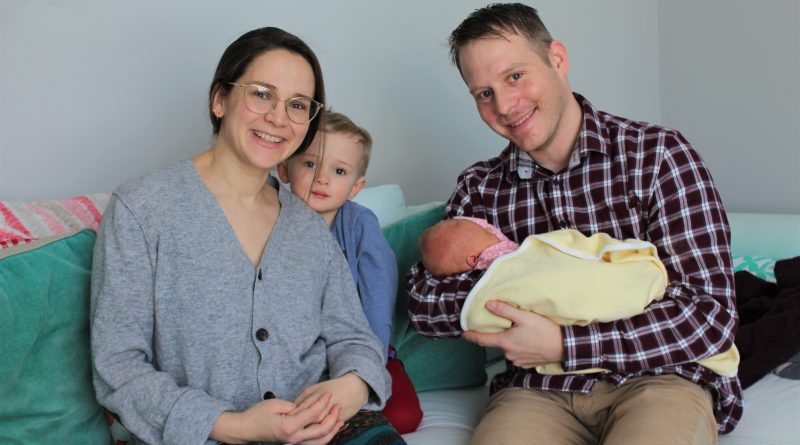 The Conception Bay South Fire Department played a role in something out of the ordinary last week. On Sunday, February 16th, Sylvie Marie Anstey was born and brought into the world with her loving parents Amy and Lukas, as well as older brother Felix. Sylvie’s birth, however, did not happen in a hospital bed. Rather, Sylvie Marie was born in Amy and Lukas’ bedroom, surrounded not by doctors, but members of the Fire Department and paramedics with Fewer’s Ambulance.

Mom Amy said the labour came on very fast. Despite feeling fine at around 3:30 that afternoon with minor contractions, within two hours she found herself giving birth to Sylvie, her second child.

“I didn’t want to rush to the hospital, because that’s what we did with Felix. So, I figured we could stay home for a bit,” said Amy. “Around 4:30, it picked up quite a bit so we called my doula, Jillian Hand, and she came over but by the time she got here, it was even more intense.”

By 5:00 p.m., Amy said, she knew they needed to get to the hospital as quickly as possible, and that even moving from the bedroom to the front door had become daunting. By that point, Lukas said, his wife could barely stand up, let alone walk even that short distance.

On her way to the car, Amy’s water broke and she knew baby Sylvie wanted to come out as soon as possible.

“As soon as my water broke, I knew I couldn’t go anywhere, I couldn’t get in this car. It just wasn’t going to happen,” Amy said. “Jillian called 911, we went into the bedroom and I laid down on the bed, and I’m honestly foggy on the rest of it.”

Lukas said it was only a matter of minutes when the CBS Fire Department were at their doorstep. The ordeal had progressed so quickly the firefighters did not want to risk transporting Amy anywhere, and they knew the baby was going to have to be born at the house.

Soon after that, the ambulance arrived and they had a house full of first responders ready and willing to help baby Sylvie make her entrance.

“I wasn’t even really processing all that was going on, I just knew that, through the pain and everything, I had to get this done,” said Amy. “So, (they) helped us deliver the baby right there on the bed. It was amazing.”

“You’d think that, with all those strangers around it would feel strange. But, it was not. It was, like she said, amazing,” Lukas added.

Amy pushed through the delivery gripping Lukas’ hand, and the hand of one of the firefighters.

“Not even once did they feel like strangers in that moment,” Lukas said of the firefighters and paramedics, noting that once Sylvie was born, everyone was cheering and sharing a beautiful moment together.

Delivering a baby at home posed its own set of inconveniences, namely the lack of painkillers to help ease the process of childbirth for Amy. Still, the two said that the first responders played a huge role in things going smoothly.

“I felt safe. There was never a moment where I felt scared, or anything at all,” said Amy. “I didn’t feel that way until after, when I got to the hospital, when it all hit me. I was overwhelmed with the thought that something bad could have happened, but it didn’t. They knew what they were doing, and it really was a team effort.”

Although the process was much different compared to older brother Felix’s birth, Amy and Lukas said that was not necessarily a bad thing. They were reminded that this type of scenario is exactly what it means to have a completely natural, non-medicated childbirth. The couple themselves stated that alone, it would have been a terrifying experience, but thanks to the firefighters, and Fewer’s Ambulance who showed up after the firefighters, it was a smooth process, and one they won’t soon forget.

Amy and Lukas expressed sincere gratefulness to Selena Aylward, Shawn Lawlor, Craig Duke, Steve Harnum, Travis (Bull) Chalk and everyone else from the CBS Fire Department, as well as Kelsey Gabriel and Brady Kahill and all the members of the Fewer’s Ambulance team.

“No words seem sufficient to express our admiration and gratitude for the first responders,” Amy said. “We could not have had anyone better to deliver our baby girl Sylvie Marie than these brave women and men.”