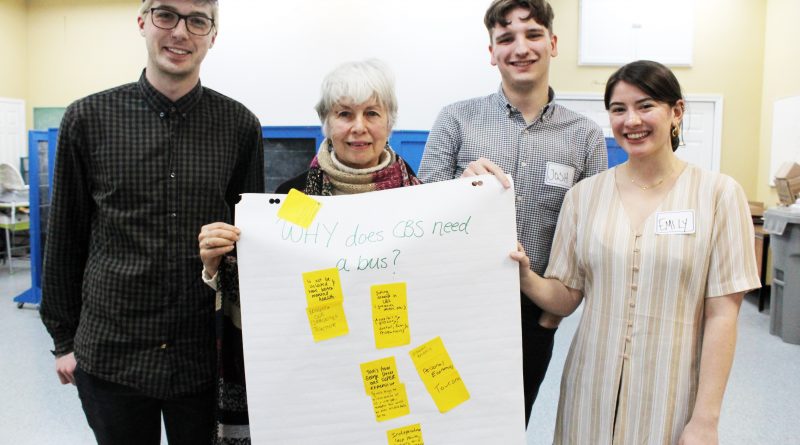 That was the consensus of the roughly 30 people who attended a public transit meeting at the St. John the Evangelist Parish Hall in Topsail on Saturday.

The event was hosted by the Social Justice Co-Operative and Happy City St. John’s.

Residents in St. Johns, Mount Pearl, and Paradise are all served by Metrobus.

“In Newfoundland and Labrador, public transit isn’t making anybody money,” admitted Aylward. “We see it more like money invested, like investing in our education or health care system. Theses are things that cost a lot of money to our society, but we widely agree is money well spent… But, to see transit as an investment, you have to see why it’s a good opportunity.”

Aylward then presented arguments in favor of investing in public transport, including that public transit could help the environment. She cited statistics that 24 percent of Canada’s greenhouse gas emissions come from vehicles.

According to the 2016 census, only 20 percent of people who live in CBS work in CBS, with most residents working outside the town. And, 90.2 percent of those people drive to work everyday.

“For the most part, people are getting to work driving in a car by themselves. So, if you have two people working, you probably need to have two cars,” said Aylward.

A public transit system would also promote more independence among those who don’t, or can’t, drive.

“There are a lot fo people in our communities, who can’t, or won’t, drive for various reasons,” said Aylward. “Maybe they’re too young, and they don’t have their permit yet… or maybe they can’t afford a car. It’s expensive to have a car in this province… or maybe people are elderly, and they can’t drive like they used to drive. Or maybe they’re disabled. But people who can’t drive, for whatever reason, need to get around too. And in the absence of public transport, they have to rely on either friends or family, even for important appointments, or they just don’t go out at all. So, isolation is a really big problem when people can’t get around. Public transit can be a ticket to independence and increased well being.”

After Aylward’s presentation, audience members were given some time to introduce themselves and explain what brought them out to the meeting.

Marilyn Reid said she is concerned about what a lack of public transportation means for seniors.

“It seems to me, what is going to happen to the elderly, unless they’ve got family support in CBS, they’re going to have to move out of this community, and into St. John’s, where they can at least have a bus service,” she said.

“That’s one real concern I have. And I’ve seen neighbours do precisely that.”

She noted that, unless she drove herself, she had no way to visit relatives in Carbonear, and that others may simply not be able to drive.

But she argued it’s not just a concern for seniors.

“As we become more of an individualistic society, we become more and more self-reliant— but only if you’ve got the money for it,” she said, pointing out that young people, especially those living on their own or working minimum wage jobs, may not be able to afford their own vehicle.

Cody Broderick moved back to CBS in September. He works in St. John’s, but shares a car with his parents.

“My schedule has to revolve around my family’s schedule now, so if I want to go out somewhere, it’s really difficult,” he said. “I love CBS; it’s beautiful here. But, living here, you can get cabin fever. It’s not good for your mental health if you can’t get out.”

Joshua Pittman said he grew up in Conception Bay South and can remember a time when his family, due to work commitments and medical reasons, had to rely on taxis to get around.

“It cost us a lot of money, and made our lives very difficult,” he said.

Emily Finch lives and works in St John’s. But as a musician, she travels often. And often has to rely a vehicle she admits isn’t totally reliable.

“With transit that would go outside of St. Johns, that would make my work life a lot more practical,” she said.

Some residents said the lack of public transit increases pressure on families to own a second vehicle while others pointed to the difficultly secondary education students in CBS have reaching campuses outside town.

Don Sword, Chairman of the Manuels River board, noted the lack of public transport has negative effects on tourism, the economy, and even immigration.

“One of the issues about CBS, economically, is getting people to come here for our amenities, and for business, and so on and so forth,” he said. “When there’s no public transport, you are eliminating a whole segment of the population that won’t come out here. And any tourists, they won’t have the opportunity to visit, unless they have another route. And immigrants — chances are they don’t show up owning a house and an SUV. So, we’re not going to get immigrants in CBS… I think there’s a whole economic piece that CBS is missing, and public transit is one of the puzzle pieces that is missing.”

Local MHA’s Paul Dinn, Barry Petten, and MP Ken McDonald were also in attendance, with all three throwing their support behind the idea.

Dinn was a member of Paradise council in 2015 when council and Metrobus launched the Paradise route, which begins at the Double Ice Complex and hits Valley Ridge, Donovan Terrace and Elizabeth Park, before going to Kenmount Road and finishing at the Avalon Mall.

Petten suggested that money collected from the federal carbon tax (which, he said does little to alleviate greenhouse gas emissions) could be used to subsidize public transport.

“If you take more people off the road, you will have less emissions. It goes hand in hand,” he wagered.

McDonald, meanwhile, supported the idea — but acknowledged the burdensome financial reality of the proposition.

“I think public transit is a necessity, especially in a town the size of CBS,” he said. “How it works out and what it looks like at the end of the day I think is going to be really confusing to put together. Public transit won’t work in CBS unless someone subsidizes it. And that is the Town.”

McDonald explained that even with federal and provincial help, a viable public transit system would depend on ridership.

“People haven’t got on to the idea of carpooling… and the reason why carpooling hasn’t caught on is that people want the convenience, of, ‘If I work at the Confederation Building, I can get in my vehicle lunchtime, and go to the mall or run here or run there, and get my errands done,’” said McDonald. “It’s not an easy fix.”

Members of CBS town council, including Darrin Bent and Christine Butler, were also in attendance.

It isn’t known is how many people would have gone to the meeting if they had a way to get there.