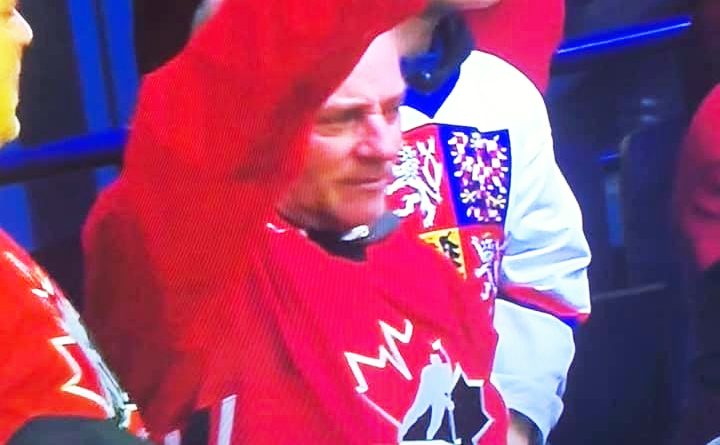 Countless millions of Canadians in living rooms and bars across the country watched with bated breath and growing excitement as Canada battled, and, after a flurry of third period goals, defeated Russia in the 2020 IIHF World Juniors.

Those millions of Canadians watched, beaming with pride as their fellow Canadians had the coveted gold medals draped across their chests.

But imagine the excitement for the some 4,000 Canadians watching the action live and in person at the Ostravar Arena in the Czech Republic.

“It was so exciting. I cried and everything I’m not going to lie, I had tears in my eyes and it was that emotional,” said Chaytor, who had travelled to the Czech Republic for the final games.

The trip started with a call from Ontario.

“I have a friend in Ontario who goes to every single World Juniors for, I’d say the last 20 years. Doesn’t matter where it is, here’s there with a couple of his other buddies as well,” explained Chaytor. “They called me up a couple of months ago and said, ‘Ian, we’d like you to come along.’”

Chaytor said he jumped on the opportunity — but not without some consideration first.

“You’re always thinking of your finances, but I said, ‘No, this is the trip of a lifetime,’” he said.

Most years, Chaytor watches the games from the comfort of home, (“Nothing says Christmas like the World Juniors,” he joked) and this year he was watching even more closely, knowing that, whether Canada made it to the finals or not, he would be in Ostravar for that final game.

“Canada was in a very, very tough division, one of the toughest I’ve ever seen,” said Chaytor. “Before we went, I was checking all the pundits, seeing who was going to do what, and ‘Who do you think is going to win,’ and Canada wasn’t even looked at to be getting a medal. They had the U.S. coming first and the Swedes and the Fins battling it out for second.”

They spent the day in Prague as the rest of the group trickled in, then took a train into Ostravar (Chaytor noted the beautiful scenery of Prague as the train continued at a leisurely pace) for the game day action.

“Our first game is that day against Slovakia, and we won that one. That was the quarter final,” he said. “Then we went on to take on Finland, who, thank God, beat the U.S., which was a great help. We shut them out, and that set us up to play the Russians. I’m a sports fanatic and the sports writing gods couldn’t have wrote it any better. I would have rather played the Russians than the Americans because the Russians beat us handily in the preliminary round, 6-0. We beat the Americans, so the Americans would have had a little bit of ‘We’re not letting you beat us twice’ attitude.”

The hotly anticipated match held even deeper significance for Chaytor than for most. You see, this wasn’t Chaytor’s first time attending a World Juniors game.

He attended when Calgary hosted the games in 2012, and was in the stadium when Russia defeated Canada 6-5 for the silver medal.

For Canada to defeat Russia in the gold medal game would erase any of the disappointment he felt at watching them lose to Russia in 2012.

And, as you already know, that’s exactly what happened.

“The way it played out, you couldn’t have asked for anything better,” said Chaytor.

And Chaytor and his group of buddies had a great view of it, behind the Russian net, about 10 rows up.

“When that goal went in with four minutes left to go, we jumped on top of each other. I’m sure there were bruises to be had. I got a couple, I know,” he said of the game winning goal, scored by Ontario player Akil Thomas.

The game was a nail-biter, and heading into the third, Russia had a one goal advantage, leading 2-1.

Chaytor jokes that the group of Canadian buddies ought to be credited with the win.

“We’re the ones who made them win,” he laughed.

He explained that during the second intermission just before the third period began, the group had a special, all-hands-in-the-middle, cheer for Team Canada.

He called it the ‘TSN Turning Point,’ a phrase used to describe the moment in play that changed the tide of a game and determines the outcome.

However, it may have taken just a little time for the special cheer to reach it’s full potency, for Canada soon answered back to Russia’s lead with three back-to-back goals, ending the game at 6-5.

“Canada is never out of the game,” said Chaytor.

He noted that, scanning the crowd, it was easy to discern Canada’s love of hockey, as thousands of other fans, identifiable by their red-and-white Canadian jerseys, had made the same trip across the globe just to witness the games.

“There’s 10,000 seats in that arena, and there were 4,000 Canadians. So, for every 10 people there four were Canadians,” said Chaytor. “And everyone one of them had a Canadian hockey jersey too.”

He added that being able to watch Bay Roberts native Dawson Mercer awarded the medal made the whole experience “extra-special times one hundred.”

“Mercer played well when he got his opportunity on the ice, he went out there and did what he had to do, he contributed what he had to contribute, and he’s a part of a gold medal winning team. Congratulations to him,” said Chaytor.

Next year, the games will take place a lot closer to home, as Canada hosts the games in Red Deer and Edmonton.

Chaytor said it’s too early yet to decide if he’ll be making the trip.

Meanwhile, when he’s not cheering for Team Canada, Chaytor said he cheers for the Montreal Canadiens.