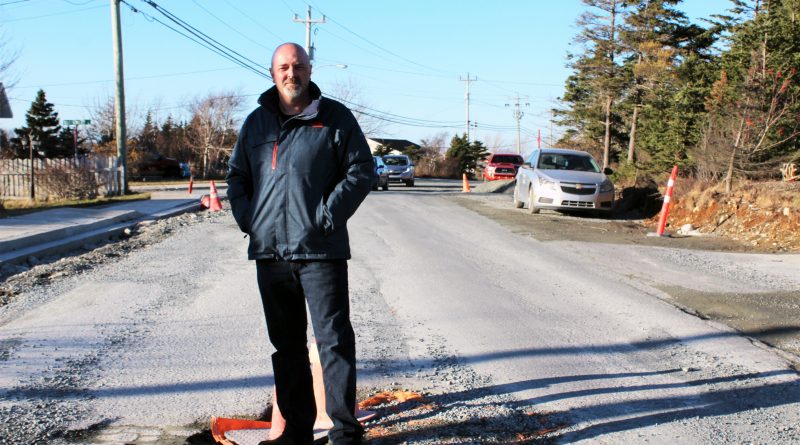 Residents of Fowler’s Road will have to wait until next year for the upgrades at the top of their street to be completed.

The work started in July, with the first phase, on the lower portion of the busy link to Pitts memorial Drive, already completed. The project was among some 60 road projects valued at $9.2 million undertaken by the Town this summer.

The Fowlers Road work includes upgrades to sidewalks, curb and gutters, and new pavement. A section of the street will get a third lane to accommodate the high volume of traffic to and from the highway.

Some residents feel the project is dragging on too long. Brian Ridgley is one of them. He has been living near Fowler’s Road most of his life, and said he is not one to complain, but the state of the road, and the length of time it has been in that condition, is forcing him to speak up.

“It’s been like this now since July, and this is November,” said Ridgely. “That doesn’t seem right. It’s the amount of time, and the amount of time that you’ll see just nobody there at all. There will be days at a time when you won’t see anybody there working on the road at all.”

Mayor Terry French said the Fowler’s Road project was tendered in a parcel, with six other roads.

“The rest of the roads have been completed, but the Fowler’s Road piece was the biggest piece of that tender,” said the mayor. “We’re taking it and making it into three lanes, putting in sidewalks and curbs and so on, so there’s a lot going on.”

French said the contractor has been told to wind up construction by the end of November. That means the contractor will have to return next year to finish the project.

Ridgley said Fowlers Road could have been completed in a timely manner if it had been tendered on its own. “There’s no stipulation as to how long any of those particular roads can be torn up,” he argued. “That’s not even sensible.”

The road’s condition has become a safety concern to some residents, Ridgely added, especially to pedestrians as vehicles navigate around ruts and potholes. The dust and noise from construction is also a concern, he added.

“One side of the road is way worse than the other, especially after you cross the four-way stop,” said Ridgely. “My wife has hit the bottom of her car a few times just driving through – that’s a car that’s licensed for the road, it isn’t special, so there’s no reason that we shouldn’t be able to drive through there in that car.”

French said Fowlers will be completed to driving standards, for now, with the rest of the infrastructure work to resume at the start of the construction season next year.

“This happens from time to time, but this (Fowler’s Road) was taking a little longer,” the mayor admitted. “We intervened on several occasions, asking our consultants to get after the contractor to get the work done … But, this time of the year these guys have a lot on their plates. That’s the reality of it.”

After a meeting between the contractor, the town, and its consultants, French said, the contractor was told ‘enough is enough’ and to stop any further digging.

“We don’t want it like this throughout the winter. Whatever’s been disturbed, we told them to finish and pave, and we gave them until the end of November for that work to be completed,” said French.

The plan is to see the parts of Fowlers Road that are currently torn up to be paved over with a single layer of asphalt to make the street driveable this winter.

French noted that while Fowler’s Road and Tilley’s Road South are the only two roads with extensive work being carried over into next year, there are still a few roads that, like Fowlers, will only see one layer of pavement this season. That includes Legion Road, which will see its second course of pavement laid down in 2020.

Ridgley said he is glad at least to have a formal timeline of what to expect. But his confidence in the project has run low.

“Putting down pavement this time of year is not uncommon, but it’s not desirable,” he said. “If they can get the pavement to here in a reasonable amount of time and get it compacted, they shouldn’t have any issues. But, from what we’ve seen here this summer, I’ve got no confidence that they can do that.”