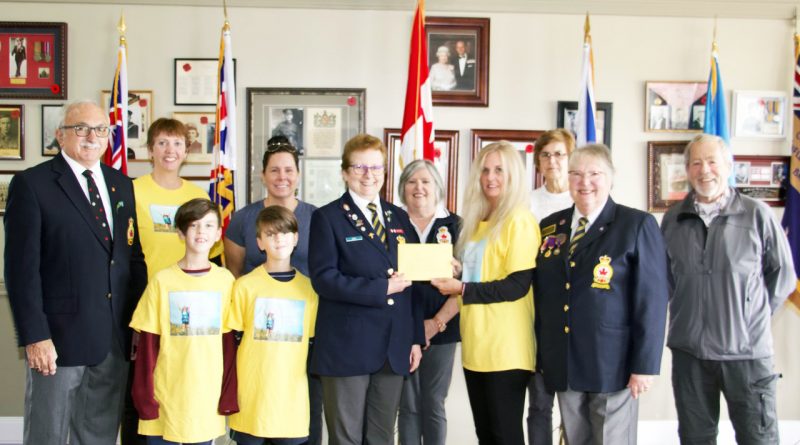 The Royal Canadian Legion Branch 50’s Poppy Fund received a significant donation this fall thanks to a local kindness group.

The Poppy Fund oversees efforts to raise funds for organizations across the country that support the country’s veterans.

This year, the Sunshine Squad added to the tally. The group holds monthly events to raise money and support for other groups in the community.

The Sunshine Squad was founded in memory of Alyssa Davis, daughter of organizer Sherree Davis. It was Alyssa’s nickname, Sunshine, that led to the group’s name.

The Sunshine Squad, throughout the month of September, put together bottle drives and collected money for the Legion’s poppy fund. On September 27, which would have been Alyssa’ 21st birthday, the Sunshine Squad presented the Legion with $800, to be added to the funds already compiled in the poppy fund.

Eileen Kavanagh, president of Branch 50, explained that the monies raised for the poppy fund are kept in a separate bank account, and are solely used for Canada’s veterans and their families.

“This may include buying groceries, paying a power bill, or (meeting) any emergency a veteran may have,” Kavanagh said. “It also includes medical needs such as walkers, wheelchairs, bed lifts, or medical aids not covered by insurance or that are needed in an emergency. This is where most of the Poppy money goes.”

The funds can also help cover expenses for education such as mental health first aid courses, which were offered for free by the Legion to veterans and their families last month.

Local schools also benefit from the poppy fund, given that the funding can help cover the costs of prizes and awards for Remembrance Day contests in the province’s school system.

Kavanagh added that legion branches across the province lend each other a helping hand if poppy funds run low, making it so that the fund is more of a shared amount of money rather than a fixed amount for each branch.

“If our Poppy Fund runs low, we would request help from another legion and we would help another legion with no funds that has a needy veteran,” she said. “A veteran in need just needs to call the Legion and say they need help and the service officer will look after them.”