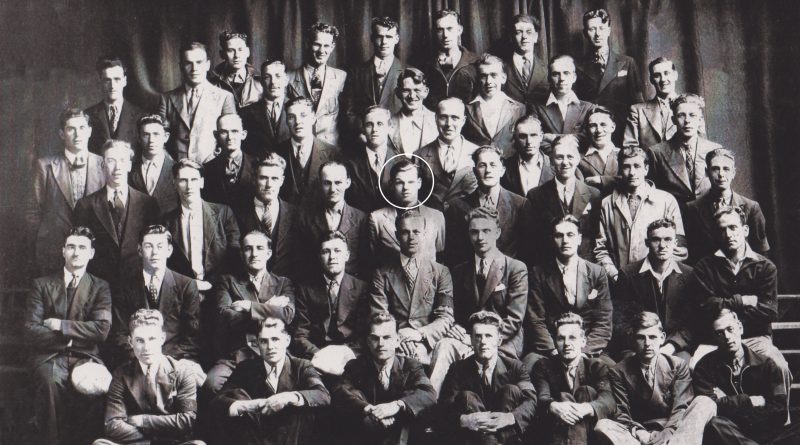 That’s the answer my grandfather, Jack Westcott, would give when anyone asked how long he served overseas.

He was 19 in the spring of 1940 when he and his best friend Walt Lacey boarded a ship in St. John’s for England to join the war against Hitler. At home he left his young wife Eileen, and their first child, Tom, just a year-and-a-half old, whom he wouldn’t see again until the boy, who grew up to be my father, was nearly seven.

Jack was among some 3,000 Newfoundlanders who answered Great Britain’s call for volunteers to serve in the artillery. About half were turned away for health reasons. More than 12,000 Newfoundlanders served abroad during World War II in the army, navy, air force and other units, a sizeable figure given the Colony’s population of 320,000.

The first draft of artillery recruits to reach Liverpool were welcomed on the dock by the city’s Lord Mayor, along with a Rear Admiral, and Newfoundland’s trade commissioner in England, who were reported to have offered highfalutin speeches. Then it was the turn of the man who become the 59th Heavy Artillery’s first and longest serving commanding officer, Lt. Col John Nelson.

“You have listened to a lot of nice things being said about you,” Nelson said.

“My message is different. You’ll work so hard that you won’t even hear the sound of the bombers when they fly overhead during the German air raids.”

To that the Newfoundlanders are said to have responded with “heavy cheering.”

My grandfather and the nearly 800 other men of the 59th spent the next four years, first learning how to be artillerymen and soldiers, and then guarding the coast of England from an expected invasion by the Germans, who tried to soften up the place with a blitz of bombing raids.

As they waited to be attacked, the men of the 59th built and guarded roadblocks, dug trenches and learned to fire whatever old guns England could come up with at first. They did this work first in Sussex and then along the coastline of Kent.

“The idea,” said Major D.F. Stone, an Englishmen assigned to train and lead one of the regiment’s four batteries of men, “was that when the Germans appeared in the neighbourhood of Dover, we were expected to rush and meet them with four (old) French 75s (artillery guns), the firing levers on which were very reminiscent of lavatory chains, and if we got a pasting, we were then supposed to hare back to Canterbury and fire off two 12 inch howitizers.”

There were food shortages, nightly bombings and training accidents.

Among those killed was my grandfather’s best friend, Walt Lacey.

It was a waiting game until the Allies mustered enough men and materiel to cross the Channel to France and take the fight to the Nazis, who had rolled across Europe knocking down armies as effortlessly as a lawn mower in low grass.

By June 1944, with the Germans tied down by the Russians on the Eastern Front, and in Italy where another regiment of Newfoundland artillerymen, members of the 166th, were fighting over mountains and through villages, Supreme Allied Commander Dwight Eisenhower was ready to order the invasion of France.

The men of the 59th, by now with better guns, had to wait out D-Day with other artillery units, as there was no sense landing them until the cruisers and destroyers had blasted out a path for the infantrymen to secure a foothold against the Germans.

The 59th hit the beach at Courseulles-sur-Mer, in southwestern France, better known as Juno Beach, on July 5, 1944. Within 24 hours the men were in action, firing their 7.2” howitzers and 155 mm ‘Long Toms’ with their respective 200 lb and 95 lb shells at a concentration of German tanks in a battle for a nearby airport.

The men of the 59th would remain in almost continuous action for the rest of the war, often firing 24 hours a day in support of Canadian, British and American troops as the Allies fought their way through blasted out villages and ruins of towns in France, Belgium and Holland on the way to Germany.


“It (the 59th) took part in the grim action at Caen, in the fierce fighting at Falaise, in the historic battle for the closing of the gap (better known as the Battle of Bulge), at Esquay and Errecy, and its guns also covered the crossing of the river Odon… (and) the crossing of the River Seine,” wrote historian Allan M. Fraser.

The regiment’s spotters were on the front lines of infantry battles, scaling church towers and 250 foot high smoke stacks to use as observation posts to spot the Germans and instruct their fellow gunners where to site their shells.

Batteries of the 59th were among the first soldiers to liberate the key supply port of Antwerp, where they were greeted by the city’s mayor who presented each of them with a bottle of wine and a pack of cigars.

That was after a prolonged battle in which they saw so much action that one of the batteries wore out their guns, which had to be replaced. “In mud and rain, the guns were in action day and night for a period of five weeks,” wrote Fraser. “Only 24 hours were spent ‘at rest’ near the ancient city of Ghent.”

The “rest period” was used to clean and service their guns and vehicles.

In many of the places they fought in Holland, the land was flooded and dry places to camp were scarce. Still, the Newfoundlanders made a name for themselves by being able to cobble together the best shelters and for being able to navigate their guns and trucks over the worst of the mud clogged and troop packed roads as they shifted as much as 150 miles at a run to come to the aid of infantrymen fighting pitched battles against the Germans.

In the Battle of the Bulge, which saw the Germans launch a desperate surprise attack to cut off the British army from its supplies and separate them from the American troops, the men of the 59th reinforced their reputation for accurate firing, devising the best camps in the worst conditions, and for manhandling their big guns and supplies over ice and snow blocked roads, all with “exceptionally high” morale. While some American soldiers froze to death in the harsh winter conditions, the men of the 59th gathered wood from the ruins of bombed out houses to line the floors and walls of their two men tents, jimmied stoves and heaters out of empty milk cans, and even, at times, rigged up electricity to light their camps.

Frustrated by their accurate firing – in one instance a battery of the 59th snuffed out seven German observation posts in a row, landing 26 direct hits on one position – the Nazis would order bombing raids over the men of the 59th and their guns.

There were other dangers, including booby traps and land mines left by the retreating Germans. In early February 1945, in support of a Canadian attack, two men of number 20 battery were killed when one stepped on a mine. “This sad incident might have claimed two more victims who were also trapped in the minefield, had it not been for gallant work on the part of the rescue party led by Lieutenant Rupert Jackson,” said Fraser. “Working with mine detectors in pitch blackness and pouring rain, the rescue party cleared a path to the two survivors and brought them and the bodies of the killed men safely back without casualties.”

As the Allies fought and chased the Nazi forces back to Germany, the 59th was given “the unusual role and a signal honour” of being the only heavy artillery regiment to cross the Rhine with the pursuing infantrymen. And they were on hand for the last two big battles fought by the British forces; the capture of the German city of Bremen and the crossing of the Elbe.

The attack on Bremen involved particularly hard fighting, with the Newfoundlanders executing quick moves and wielding their heavy guns and shells “as though they were 25 pounders… without a hitch or a mistake.” Just as Bremen surrendered, the 59th was ordered to hurry 130 miles further to help the 12th Corps in the attack on Hamburg.

With Germany’s surrender, the 59th was given a 27 square mile sector in the suburbs and countryside of Hamburg to police. This included controlling the movements of refugees from a slew of European nations, as well as German prisoners of war and civilians. They maintained a collection centre for interrogating German prisoners and sorting the SS members from the regular Wehrmacht troops. They also operated nine refugee and “displaced persons” camps, restoring order and improving conditions, which had broken down under the Germans as the Nazi regime crumbled.

By the 29th of June, 1945 with the war won, the men of the 59th were ordered to return to England to demobilize and prepare for the trip home.

The two most respected commanders on the Allied side, General George Patton of the American army and Field Marshal Bernard Montgomery of the British, attributed much of the Allies’ victory to the success of the artillerymen.

As for the men of the 59th specifically, they had drawn accolades from across the top levels of the British army. None were more impressed than their commanding officer, Lieutenant Colonel R. C. Longfield. “As their Colonel, let me say as Epilogue: If there is any job requiring courage, determination and hard work, these men will do it, if it is within the bounds of human endeavour. A really fine lot of men I am proud to command.”
editor@theshoreline.ca