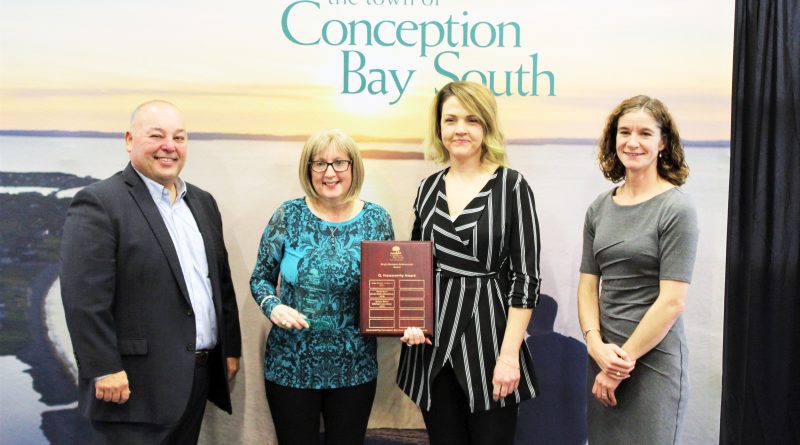 Some of the best in business in Conception Bay South were recognized for their efforts last week as part of the town’s celebration of Small Business Week.

Mayor Terry French heralded the success of the local business community, despite a downturn in the provincial economy.

“As the second largest municipality in the province, and in an (overall) economy where things are on the decline, Conception Bay South is still in a growth position, which is great,” said the mayor.

“Even though the numbers are smaller, we’re still headed in the right direction,” French added, noting the Town hosts some 575 businesses. “That alone is something to be quite proud of.”

French explained the main strategy of the current council is to support population growth as that will boost everything else.

To that end, the Town has invested in a provincial advertising strategy highlighting CBS’ attractions for families. The commercials also give current residents a sense that the community is headed in a good direction, he said.

“When you have a positive environment in your community, then that can only be a good thing. (The commercials) are doing what they’re intended to do,” said French.

As for this year’s awards, Jennifer Lake, the town’s director of economic development, said the number of nominations this time around was impressive.

The Beautiful Business Award, which goes to a business with an exceptional outward appearance, went to Newfound Inn and Suites, the recently renovated motel in Kelligrews.

The Community Pride and Partnership Award, which highlight a business that has made significant contributions to recreation, amateur sports, community initiatives, arts and culture, education, and other charitable groups, went to Sisters in Fitness.

“We’re from Conception Bay South – we’re Foxtrap girls, and we’ve had nothing but a wonderful experience doing business in CBS,” said Michelle Porter, co-owner of the enterprise with her sister April Porter Crews. “Those of you who are new to business in our community, or looking to grow, the biggest piece of advice I can give is ‘We make a living on what we get, and make a life on what we give.’ I really, truly believe that if we give, you always get back in your business.”

The Established Business of the Year Award, which goes to a business that has demonstrated a recent notable achievement, and is committed to customer service, went to Bill’s Muffler and Brake Shop Ltd.

The Business Improvement Association Member of the Year Award was accorded to Regular Power Clarke Bennett Lawyers for their contribution to the town’s downtown core. This past year the firm opened a larger and remodeled chambers in a building big enough to also house the new location of Scotiabank in Manuels.

Ninepenny Brewing, a craft brewery that opened this year, was awarded with the New Start Up Award for its contribution to the local economy.

Co-owner Keith Bartlett said CBS has been nothing short of welcoming since the brewery opened.

“We really felt that CBS was where our brewery belongs, we really felt like a part of the community … we’re really happy to be recognized this way,” he said.

The David Murphy Leadership award, named in memory of the late, long-serving president of the CBA Chamber of Commerce, was presented to Eastern Safety Services for its entrepreneurial spirit, creativity, and innovation in its day-to-day business activities.

The final award of the afternoon, the G. Noseworthy award, which recognizes an outstanding individual employee for contributions to the success of a local business, went to Sandra Walsh of Michael’s Jewellery.