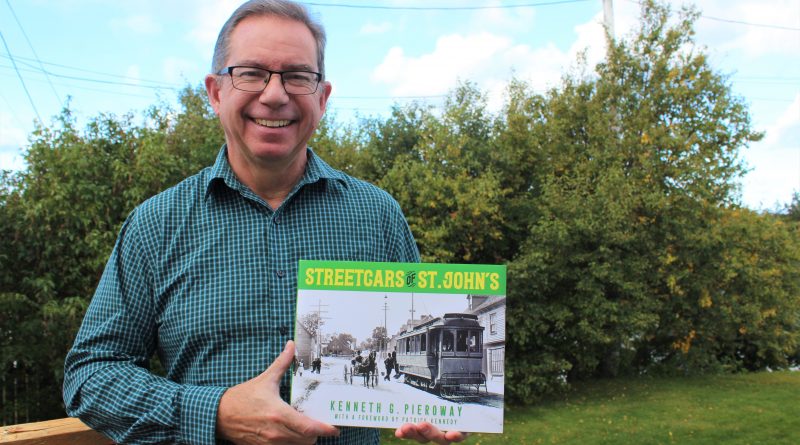 If you’ve got an interest in the Newfoundland of old, then Ken Pieroway’s new book may be just your thing.

Over the last 20 years, the CBS man has managed to produce three unique books – Rails Across the Rock, its sequel Rails Around the Rock, and now, as they say – just in time for Christmas – Streetcars of St. John’s.

The first two books featured photographs and text about the rail line that once spanned the island. The most recent book details the street railway system that was prevalent in St. John’s from 1900 to 1948.

The book features photos taken during that period, and juxtaposes them side-by-side with modern day images of the same locations captured by Pieroway himself. It’s not only a good way to relive the time when streetcars were a picturesque staple in St. John’s, but also to gauge how much the city has changed since they departed.

Pieroway said the inspiration for the book stems from stories his mother, who attended Memorial University College in the 1930s, told him as a boy.

To get his hands on the old photos featured in the book, Pieroway enlisted the help of a number of people, including the late Larry Dohey of The Rooms, the City of St. John’s’ archives, the Canadian War Museum, and others.

The project took about five years, with some of the present day photo opportunities only being available for certain, small periods of time due to the lighting and time of year that was required to make the photo look as clear and sharp as possible.

Pieroway sometimes had to wait months so as to not feature seasonal construction work in some photos, and capture the everyday look that people are familiar with.

“You didn’t want any eyesores in the picture, like a pile of gravel and things like that,” he said. “Sometimes I’d go to take a picture, and there would be a big garbage truck or something parked there, and you’d have to come back another time.

“Anyone can go down and grab a picture on a rainy, foggy day. I wanted to show people that Newfoundland does get some good weather, for one, and seeing the colours next to these black and white photos can really help you appreciate them in a different way. Having the right lighting is important for that. Timing and sunlight was everything.”

The royalties Pieroway earns from this book will go to Newfoundland Power’s ‘Power of Life’ project, which raises money for cancer treatment equipment, support programs, and promotion of cancer education and awareness.

Over the course of the five years it took to bring this project to completion, Pieroway said he experienced firsthand the friendliness that Newfoundlanders have become known for internationally.

“I’d be standing on Water Street, or Military Road, or wherever really, and people would come by and offer me assistance – they thought I was a tourist,” he said. “You’d be surprised to know just how many times people stopped to give me assistance. It’s amazing how friendly people were – this whole project just totally reinforced to me the reputation that we as Newfoundlanders have gotten as being friendly people… People would stop and wait before crossing the street if they saw me there, and they were just very accommodating. That’s something that really stood out to me.”

Now that the book is complete, Pieroway said he could not be more pleased with the way it turned out. On top of that, he knows that his mother, Ann, whose 1937 graduation picture is also featured in the book, would be just as pleased as he is with the final product.

“She recalled (stories of streetcars) with such fondness that I just always remembered these stories,” he said. Not surprisingly, Pieroway dedicated the book to her. “It’s a little testament to her, and my upbringing.”