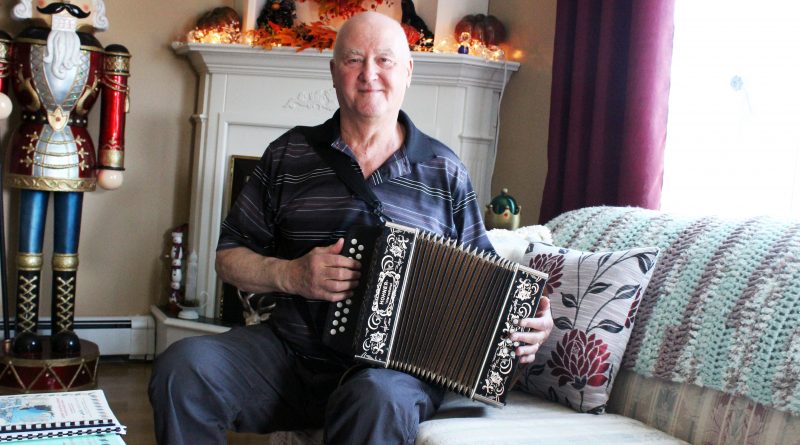 If 20 years ago you told Bill Wiseman that he would go on to write 32 instruction books for the button accordion and sell them around the world, he probably would have laughed.

And if you had told him he would convert part of his downstairs into a studio to record music accompaniment for his books, he would have laughed at that too.

And if you had told him he would learn to use a computer to design his own graphics for those books, he would have really laughed.

Flash forward to today, when Wiseman has sold tens of thousands of books across the globe, with plans to release at least another seven more volumes.

But this story almost ended before it began.

“In 1998 I sold my button accordion, and I don’t know why. The minute it went out the door, I was sorry,” said Wiseman, who as a 14-year-old had learned to play his father’s accordion well enough to play simple waltzs at kitchen parties growing up on The Battery. (He didn’t play the more advanced pieces for fear of swift retribution from one of the old fellows congregated around the table if he messed up.)

His wife Phyllis came to the rescue, and for Christmas bought Bill a new accordion.

“When she gave it to me, I knew half a dozen tunes, but a lot I had forgot,” said Wiseman.

He went to O’Brien’s Music in St. John’s, but, as a musician who plays by ear, couldn’t find any suitable books.

So, Wiseman said, Gord O’Brien suggested he write one.

“Gord said, ‘Bill boy, you’re retired, you’ve got nothing on your hands. We need a book.’

“So I took it to heart, and went home, and it took six to eight months to read music enough to learn how to transpose.”

All told, the first book took a year.

The boys at O’Brien’s were well pleased and bought a dozen copies.

“My jaw dropped just dropped,” recalled Wiseman. ‘You want a dozen?’”
Those dozen books sold out in the first week, and O’Brien’s ordered more.

Soon, Wiseman was selling his book to other music stores, and not long after, he began work on a second book.

Next, he drove across the island, and began selling to stores in Clarenville, Gander, and Corner Brook. As he released more volumes, Wiseman opened his own EBay store and started his own website to sell the books online.

With a presence in the online world, he began selling his books to the ‘States.

“The first sale we made to the ‘States made my jaw dropped,” said Wiseman. “I ran upstairs, ‘Phyllis, Phyllis, we sold a book down in the ‘States.’”

Now, its commonplace. Last year, some 72.6 percent of his business was to the United States. He has also sold books to players in Australia, New Zeland, Ireland, the UK, France, Germany, Norway, Finland, and Russia.

“And we even sold a book over in Taiwan,” Wiseman laughed. “There must be a Newfoundlander over there.”

Wiseman had part of the downstairs of his Upper Gullies Home outfitted as a studio so he could record accompaniment CDs to go along with the books.

“It was a long way playing from my father’s kitchen, scared I’d make a mistake,” he laughed.

The Wisemans have sold tens of thousands of books over the last 19 years, and much of the work is done in-house, with Bill compiling, transposing, and recording music, as well as designing and laying out the books, while his wife helps place orders and mail the finished product. Only the printing is done off site.

He has also done some teaching over the years.

“I had one woman who called me, she was 84 years old. And she said, ‘My husband is getting me an accordion for Christmas. Now, I want to surprise him,’” said Wiseman.

So, Christmas morning, when they get up, the last thing she opened was the accordion. She took it up, and started fooling around with it, and then started playing ‘Mussels in the Corner.’ Everybody’s jaw just dropped.”

While many adults play the instrument, Wiseman said it’s also a popular choice amongst youth, and he has a series of books written especially for children.

He said that much of the success boils down to personal determination and outside assistance.

“Get an idea in your mind and stick with it, until you prove that its feasible or its not feasible,” he advised. “And you got all kinds of people out there to help you… When I started this, I never had a computer. I just knew how to turn one on. But I had family who were well-versed in computers and they helped me.”

Wiseman has no plans of slowing down, so long as the business doesn’t interfere with other important activities.

“As long as this doesn’t interfere with me getting out on the water fishing or in the woods hunting,” he laughed.