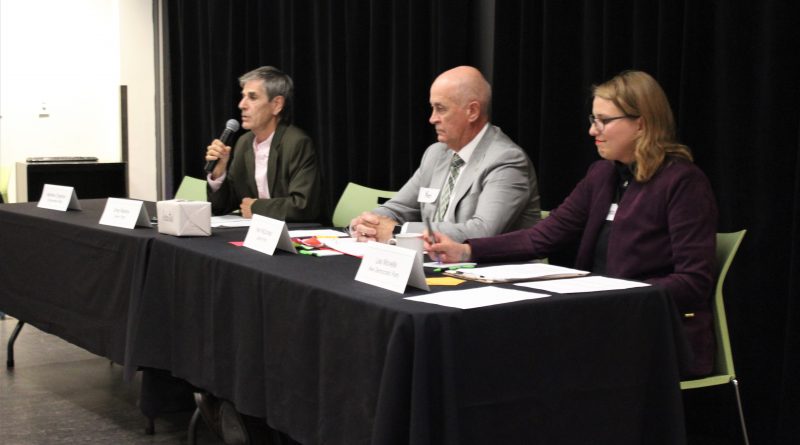 It might not have had the fireworks of the national leaders debate that aired across Canada Monday night, but the debate between Avalon Riding candidates on environmental issues last week did generate some passion on the part of the candidates.

The debate held at the Manuels River Interpretation Centre also drew a fair sized audience. The session was organized by a group called 100 Debates on the Environment, and tackled everything from water pollution, public transit and electric vehicles, to the oil and gas industry.

But while there were four seats on the debate floor, only three were filled.

The contenders included Liberal Ken McDonald, Green Party candidate Greg Malone, and NDP candidate Lea Mary Movelle. Conservative Party candidate, Matthew Chapman, declined the invitation to partake in the event. When pressed by the organization for a reason why, they did not receive a response.

The debate started with the candidates addressing how their respective parties would make Canada meets its international obligations to reduce greenhouse gas pollution.

Movelle said the structure of Canada’s economy is a central part of the problem. She and the NDP want to fundamentally change the way the country conducts business.

“Under politics and business as usual, multinational corporations are permitted to come into communities, extract our natural resources at immense carbon costs, and leave us to clean up the mess,” she said, noting an NDP government would end subsidies to fossil fuel companies starting on day one. “There’s no good reason to give public monies to oil companies who threaten the viability of our habitat to line their own pockets.”

McDonald maintained the Liberal Party has done more to fight climate change in the past four years than any federal government in Canada’s history, alleging a Conservative government would undo those efforts, including the plan to invest in renewable energy, and the plan to ban harmful, single-use plastics.

Malone said the Green Party aims cut Canada’s emissions by 50 per cent over the next decade.

Malone said the Greens want to see the oil and gas industry get on board with those changes, noting that the skills of drillers and engineers, and others, are still necessary for not only the future green economy, but during the switch-over from fossil fuels as well.

The oil and gas industry came up in another question during the debate, which explored how each party will ensure oil extraction is pursued in an environmentally responsible way. The question noted the three separate oil spills in Newfoundland’s offshore within the last year.

All three debaters agreed there is no such thing as truly clean oil. Movelle said it is the federal government’s responsibility to ensure the oil and gas industry is safe for not only the environment, but for its workers as well, and that relying on the industry to regulate itself is not plausible, referencing the three spills as evidence.

Movelle said the CNLOPB has conflicting responsibilities by being accountable for the marine environment, while promoting the oil industry.

“The NDP have committed to splitting the board into two entities so that one can focus on labour and the environment, without the mandate to promote the industry, avoiding the blatant conflict of interest the board currently faces,” she said.

The Greens would like to see proposed environmental regulations strengthened further. Malone said the province is faced with a government that violates this Act, despite being the same party to introduce it.

Malone maintained the CNLOPB actively works against the government and the scientists at Memorial University who are trying to protect seabirds and wildlife.

He contended that when it comes to the environment, the Liberal government cannot be trusted.

“We will stop drilling and stop exploration, and keep out of the no-go zones. The CNLOPB is a joke – it doesn’t protect us, and it doesn’t protect our environment,” Malone said. “We’re going to have to do that. None of those oil rigs out there cooperate with MUN … They won’t adjust their schedules, they won’t talk, so what’s that about? That is hostility toward the environment, and that has got to stop.”

McDonald said the fact that the three oil spills had been deemed as preventable is a big concern. He argued that the Bill C-69 was introduced to implement better rules for projects, in order to protect the environment, grow the economy, and restore public trust in the decisions government makes in resource development.

“Right now, the offshore oil industry and fishery are vital to the overall well-being of our communities, and the provincial economy,” he said.

“While prosperity around the oil industry will one day come to an end, it would be irresponsible for any of us not to support a responsible industry that benefits so many Newfoundlanders and Labradorians.”

Movelle countered that the Liberals are responsible for the legislation that has allowed the spills to occur. She accused the Liberals of being tied too closely to the oil industry, and unwilling to actively control its effects on the environment.

“They side with their wealthy donors and wealthy friends,” Movelle said.

McDonald shot back that Hibernia started long before a Liberal government was in power in Ottawa, and added that after Bill C-69 was introduced, some of the bigger companies were not opposed to the environmental regulations it imposed on them. “The only ones who were upset, are the ones who make money because of the oil industry,” he said.

The last of the evening’s seven questions pertained to the future of travel within the province, and whether or not the parties would look into electric vehicles and better public transit.

The Green Party, Malone said, wants to see Newfoundlanders in electric vehicles by 2030. This, he said, is also part of the answer to paying for Muskrat Falls by subsidizing electric vehicles.

“God knows we’ve got the infrastructure for it – we’ve got enough towers across the province to crucify every Newfoundlander – we could have electric charging stations everywhere right up to Nain if we wanted to,” he said. “Let’s get everyone in electric vehicles, and then there’s this big base of consumers to pay down Muskrat Falls without driving up household rates.

Then, we’re free to go on to renewables in other areas.”

The NDP’s Movelle was of a similar mindset. However, she explained, the party is more focused on integrating public transit across the province and ridding the island of private vehicles altogether.

She recalled a time when her family did not have its own vehicle, and how isolated it made her feel given she was unable to travel even relatively small distances due to the lack of proper public transportation for smaller and rural communities outside of St. John’s.

She said that, as it stands, low-income families are forced to either undertake payments for a vehicle that they cannot afford, or live with the burden of being isolated from a majority of the province.

“Our habitat will not survive a society that does not move away from private vehicle use, and working people cannot afford it anyhow,” she said.

McDonald, meanwhile, didn’t looked like he was convinced of that idea.

While he admitted public transit is one of the best ways to curb Newfoundland’s carbon footprint, he pointed out that this is far from the first time this conversation has been had in the province, and each time it ends with failed attempts.

“As it stands now, public transit is not feasible or realistic,” McDonald said. “That’s why, quite frankly, I think this question is a little unfair, because I don’t think this is a conversation that works in Avalon.”

Instead, McDonald said, the focus should be on how government can incentivize people in rural Newfoundland to cut down on their fuel consumption by biking, walking, and carpooling. As well, he would like to see more low emission vehicles.

Movelle said hearing the words ‘not feasible’ from government basically boils down to the Liberals not wanting to prioritize it, and that they will not spend the money to get it done.

“Governments not being able to afford something is not a good enough reason to not do it,” Movelle said. “Government has a lot of money, and it’s about where we put it, and what is prioritized.”

McDonald reminded folks there used to be two bus companies operating in this region, but neither of them thrived, despite a growing population.

“Those companies had to close because of lack of ridership. Government can put money into buses all they like, but if there’s nobody wanting to use them and take advantage of that, they’re just going to be another drain on the public purse,” McDonald said. “If that’s the NDP policy, good luck.”