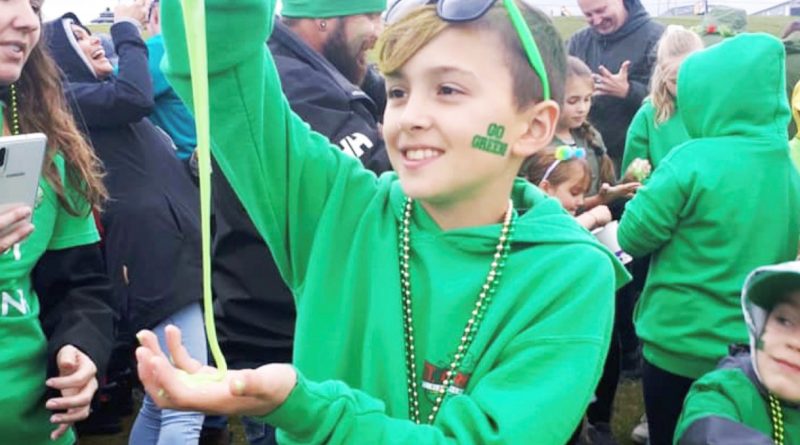 Joanne Newman and Jennifer Hiscock of Get Messy NL are used to catering to parties of about 15.

The number is important because the pair were trying to break a Guinness World record for the most people making slime simultaneously.

The record is currently held by the 933 people who made slime in the City of Carson in Carson, California, USA, on 1 July 2018, as part of the city’s July 4 celebrations.

“Pending all our evidence of what they want, after they’ve reviewed everything, we’re new Guinness world record holders,” said Joanne Newman.

She added that while potentially breaking the record is plenty exciting, there was something more important going on between all the messy, squishy, ooey-gooey fun; a fundraising campaign for a great cause.

“The real winners were the Candlelighters,” said Newman.

As of Monday, the donation total was over $8,000, with money still coming in from t-shirt sales and online donations.

Get Messy has a long history with the Candlelighters, a volunteer organization dedicated to improving the lives of children with cancer.

“When Jennifer Hiscock and I were a brand-new business, they took a chance on us. They hired us to come to their summer camp, and we’ve kept a close relationship with them since then.”

The pair have since entertained at several Candlelighters events and functions.

“We always leave feeling so happy and so glad that we did it, that we knew that that’s who we wanted to raise the money for,” she said.

The pair, who have been in business for about three years, hosted the event at the Paradise Double Ice Complex Sunday afternoon, with people young and young at heart (one 77-year old was awarded the title of eldest slime maker) flocking in from Paradise, Conception Bay South, Mount Pearl, and St. John’s to get in on the messy fun.

“I’ve heard from a lot of people that the excitement and the vibe of the crowd is something that they’re never going to forget,” said Newman, who noted that all that slime went home with its makers.

“One of my girl friends sent me a message saying that her kid almost didn’t go to school the next day because he was covered in slime,” she laughed.

The idea germinated some months back in a school room classroom.

Newman’s business partner, Jennifer Hiscock of Paradise, is a substitute teacher, who mostly teaches at Octagon Pond Elementary. She got the idea while at work.

“She was at work one day and a little boy was reading from the Guinness World Record Book, and she said, ‘I bet there’s something in there we could do,’” recalled Newman.

As slime parties are one of their biggest hits at Get Messy, it seemed a perfect fit.

But what exactly is slime?

“Slime is a parent’s worst nightmare and a child’s favorite past time,” said Newman.

It’s a messy, goopy, well, mess, that can be dressed up with food colouring, sparkles, beads, or sequins. Online recipes for slime vary, but often include some combination of household ingredients such as glue, water, contact lens solution, and baking soda. Some recipes substitute certain ingredients for another, and most recipes call for different variations or mixture amounts.

Newman and Hiscock have nailed their secret recipe down to a near scientific perfection.

“We mixed 1,200 bags, and every single person who made slime had it turn out. We have our portions just so. We are the Slime Queens,” said Newman.

“We’ve got many, many messages over the last 24 hours asking for our secret recipe.”

The pair applied to Guinness in May, but didn’t receive approval to attempt the record until August 27.

September is Childhood Cancer Awareness Month, the pair wanted to hold the event before month’s end. It made for a busy September.

“Three weeks ago, we didn’t have one sponsor, we didn’t have materials, we didn’t have one team registered. So, in the last the weeks, we really worked exceptionally hard. We’re just a two-man show, it’s just me and Jennifer, making phone calls and distributing donation letters and doing what we could do to make this a reality,” said Newman.

They didn’t receive supplies from corporate donors such as Elmer’s and Bausch and Lomb until the Wednesday and Thursday before the event, meaning for a lot of late nights preparing ‘slime bags’ with family and friends.

It will be some weeks before the pair hear back from the Guinness World Records judges.