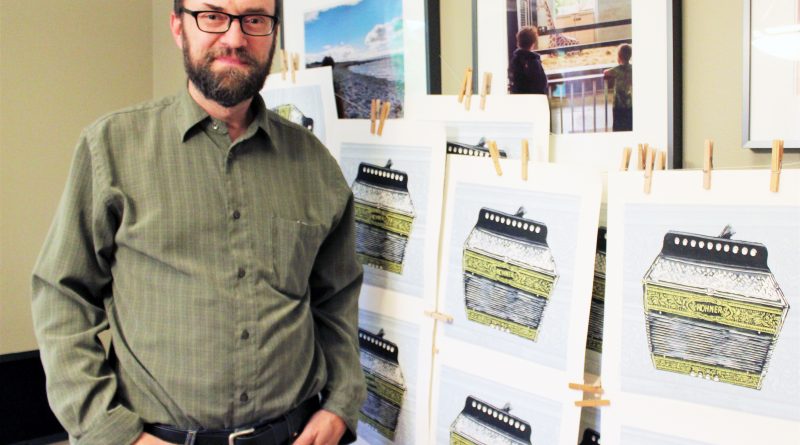 Art has played a major role in Chris Batten’s life for as long as he can remember.

The CBS resident grew up drawing and always kept a pen or pencil pressed against paper. He maintained the interest through high school and went on to attend art school – where he met his wife. Now, as an adult, Batten works at the art gallery in The Rooms. His latest personal exhibition, meanwhile, is on display at the Leyton Gallery of Fine Art in St. John’s.

Batten said after graduating from post-secondary, he took a little break from creating art himself and focused on solidifying a career. About a year ago, he picked up the craft once again. The inspiration stemmed from a big donation of prints that he was asked to work on. It re-ignited the creative spark in him.

Batten’s work is part of an exhibition titled “Island Light” and is on display until later this month. Other artists in the exhibition include the likes of Jack Botsford and Sue A. Miller.

Over the years Batten has delved into everything from photography to printmaking, and painting. His inspiration stems from his surroundings in Newfoundland.

“A lot of it is family, and life-related things that come from growing up here in CBS,” he said. “As an artist, you always try to look at your own imagery and try to develop your own style. I’m trying different styles now, and I don’t have a series of similar work yet, but I’m working on it.”

Batten has some seven or eight projects completed now, including a scene of Signal Hill with fog rolling in over the harbour.

One of Batten’s favourite pieces is a woodcut reduction piece of his father’s accordion. The piece speaks to his own life, he said, and represents a very important part of not only him, but his family.

“I have two boys, and when they were younger and at my dad’s house, they always liked the music. Now, both of them are musical people,” said Batten.

“My dad gave me this accordion that my grandparents bought for him at O’Brien’s in 1962, and it’s been a part of the family ever since. It’s a bit of family history.”

Reduction woodcut is a form of printmaking that Batten is relatively new to and can involve a lengthy process. But he is enjoying the challenge and learning curve involved with it, which differs significantly from more traditional woodcut art.

“I could be here for hours, sometimes days, just looking at it and trying to figure out where to go next. It requires a lot more planning, because once you cut it away, then that’s it, it’s gone,” he said.

Batten’s work is finding a warm reception with visitors, and buyers, at the Leyton Gallery.

Batten said people like seeing a Newfoundland connection in art, and that his own work encapsulates that, naming Newfoundland artists like the late, great Gerry Squires and Frank Lapointe as some of his biggest inspirations.

In the future, Batten hopes to return to photography, noting he’s accumulated all the right equipment, but allowing that creating photos tends to take up a lot more time compared to something like printmaking, which he can pick up and practice any time, whereas photography has the potential to take up an entire weekend.

Batten is also in the process of building an online presence. At the moment, he is directing people to the Leyton Gallery, but hopes to set up something of an online shop and gallery of his own work in the future, as he accumulate a bigger collection of pieces.

Those looking to see Batten’s work can find it on display at the “Island Light” exhibit, which will remain open until Saturday, October 12th.