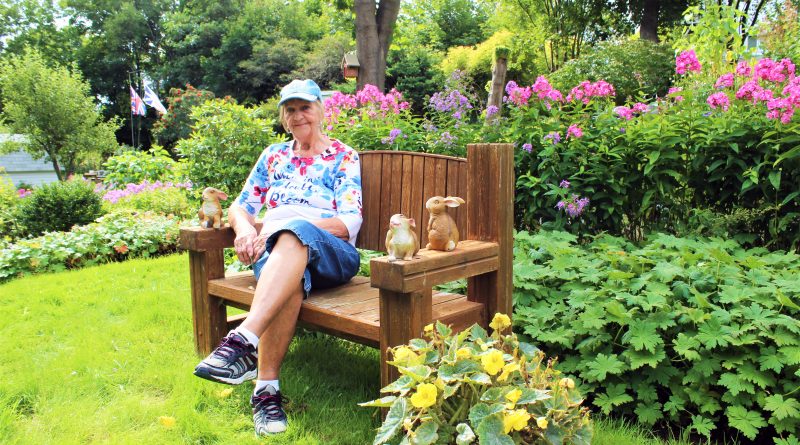 Gardening has become a method of therapy for Gladys Dawe of Upper Gullies. But it’s one that also happens to give some relaxation to everyone else who has had the pleasure of visiting her expansive garden with its colourful floral arrangements and sunflower stalks reaching well over 6-feet tall.

Last week, Dawe’s property was recognized by the Town of Conception Bay South during the annual Best Garden Awards.

Walking through the garden, guided by Dawe herself, you can’t help but appreciate the natural beauty that Dawe has coaxed into bloom in her little corner of Conception Bay South, as well as the amount of hard work and dedication she puts into it.

The annual awards herald and showcase some of the best kept gardens in the community through a partnership with Scott’s Miracle-Gro. Dawe was one of five winners recognized for their works. She took first place.

Dawe said her interest in gardening started at a young age, when she would walk about the community in the 1950s to pick flowers, simply because of how much she loved them.

The home she lives in now is the same one that her husband built from the ground up many years ago. At that time, she said, the garden was nothing more than a conglomerate of trees and brush. Dawe began planting flowers along the road leading up to the house. This slowly grew to become flower arrangements that would get larger and more prevalent as time went on.

Now, her garden is like few others. Large trees of all kinds tower over some portions of the lawn, while other parts feature homegrown vegetable plots, or blooming flowers tall enough to brush the top of one’s head.

Dawe allowed that when she is gardening, it is not hard for her to lose track of time, and she has spent entire days – sometimes lasting until 10 o’clock at night – tending to the plants.

“I just love it. I always have, and I think that’s important. You’ve got to like what you’re doing, or you’re going to be miserable,” said Dawe. But, she added, she’s never considered any of it to be work, even when it comes to digging up manure.

There came a point, too, when the gardening became even more than just a hobby. When Dawe was 48, her husband took a stroke. She took it upon herself to try and look after him as best she could. In the following years, Dawe suffered the loss of two of her daughters. Her husband, as well, died only a few short years later.

She admitted she struggled with the reality of losing family members prematurely, and that spending time in her garden was one of the few places she could find peace.

“I’d just dig myself right into the earth, and I loved every minute of it. I just had to keep on going with it, further and further. It helped keep my mind off things, and it was a therapy. And good therapy, too,” she said. “It really helped me. Tears would flow, but I’d still go on and tend to my garden. I had to. Otherwise, I just don’t know if I’d have gotten through it all.”

Every spring, Dawe gets to work and keeps at it until late fall, just before the frost starts to hit. At that point, she cuts it all down and lets mother nature take over for the winter season.

Although cutting it all down in November can be tedious, it works wonders for the garden’s health in the grand scheme of things, she said. Plus, it means she can get right to planting more in the spring season without having to worry about dealing with the leftovers of the plants that the cold snow of winter claimed in months prior.

It’s not only Dawe who loves her garden. At one point in time, it was not uncommon to have visitors stop by looking for a tour. Sometimes, people would even have weddings there, free of charge. Dawe said she was simply happy to help people enjoy their big day.

“I’ve always loved it, and I always will,” a smiling Dawe said of gardening. “It gets me through a lot, and I just don’t know what I’d be doing without it.”