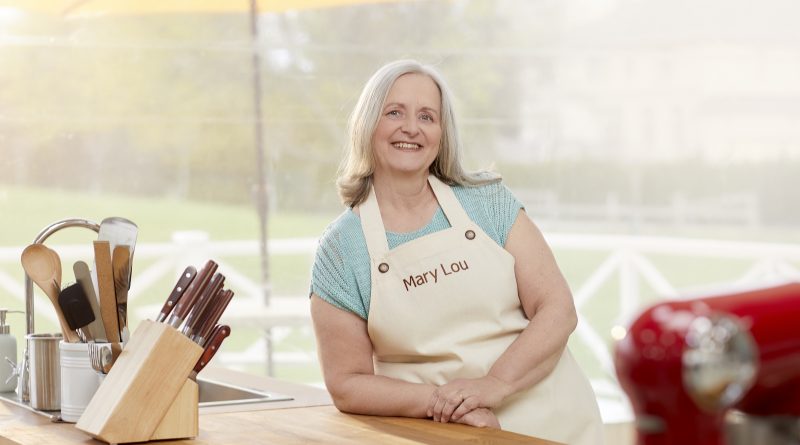 Baking has always been a passion for Mary Lou Snow of Topsail. Now she is sharing her talent for all things sweet and tasty with thousands across the country as a contestant on CBC Television’s Great Canadian Baking Show.

Snow, a retired physiotherapist, was judged among the top bakers in the season premiere last Wednesday, wowing the judges with her glittering blue ‘Iceberg Cake.’ The show airs Wednesday evenings at 8 p.m.

Snow has been baking all her life, with some of her earliest memories of the kitchen starting with her mother, who taught her the ins and outs of creating baked goods. Growing up in a single parent household, Snow did what she could to help her mother around the house, which sometimes meant lending a hand in the kitchen. She said her family has produced a number of good bakers, so it’s no surprise Snow herself developed a love for the craft.

Instead of relying on store-bought goods and ingredients, Snow tries to keep things as organic and natural as possible.

“I kept it up all through the years, and with my four kids, I tried to bake mostly organic, from our garden,” she said. “Everything we did here at home, in this house, was either organic or from scratch. We hardly used a can or a package. That’s how I kept up with it over the years.”

Although she would not describe herself as having been a hippy, Snow allowed she grew up as part of a generation that saw the importance and health benefits of baking, and eating, organic foods.

“We tried to stay natural, not buying cookies from the supermarket with 25 ingredients in them, when I can make them at home with five or six – no preservatives, and that sort of thing,” she said.

While Snow’s creations have long been lauded and appreciated by family and friends, the Great Canadian Baking Show will see her pit her baking chops against nine equally talented from all corners of the country in weekly three-round baking challenges, until only one remains.

The show is in its third season, with Snow being the only contestant hailing from Atlantic Canada this time around.

In fact, Snow was accepted to the show last year, during the second season, but was one day late when she responded to the casting call. But that solidified a spot in the big communal baking tent for this season.

Filming took place in Ontario throughout the month of May, with episode one airing last week. Episode two is set for the screen tonight.

Snow said she has received plenty of praise for her performance on the show, once friends and family were able to finally see the first segment last week. She admitted that despite being there, in the moment and seeing the workings of the film crew, it was still a little odd to see herself on television.

“That was the weirdest part for me, but it still wasn’t so bad. I’m not the type of person who likes to get my picture taken anyway, but we had spent so much time doing makeup and interviews, and it got to a point that I got used to it all,” Snow said. “It’s just very interesting to see yourself on the TV.

“It really was a once in a lifetime opportunity, and I think they were fair to everybody in that first episode. I was really pleased with the way it turned out.”

Baking competitively was a new experience for Snow, but she told The Shoreline she was not intimidated by that aspect of the show.

“It was a bit strange at first … not that it was intimidating, it was a very fun experience to tell you the truth,” she said, admitting however that being timed while baking was probably the hardest part of the contest. “If anything goes wrong, you have to start over, and you’re worried about having enough time. That was the only part that was a bit difficult for me, especially during some of the technical bakes, when it was something I had never made before. It was a unique challenge for me.”

But even that stress was lessened when she realized she was not the only one in that boat, Snow said.

Now that all the filming is complete, Snow said one of the biggest things she took away from the show was controlling the amount of improvisations she uses while baking. She calls herself a traditional Newfoundland baker, which often means recipes are stored in the memory bank, as opposed to written in full detail, right down to the exact measurements. Snow is making an effort to be a little more consistent with her baking, and to write down the process once a satisfying final product comes out of the oven.

“I also learned the importance of being confident in yourself when baking,” Snow said. “I don’t think I give myself enough confidence sometimes … You’ve got to understand that you can’t always please everyone, and be able to accept that. And then, from there, you can improve yourself.”