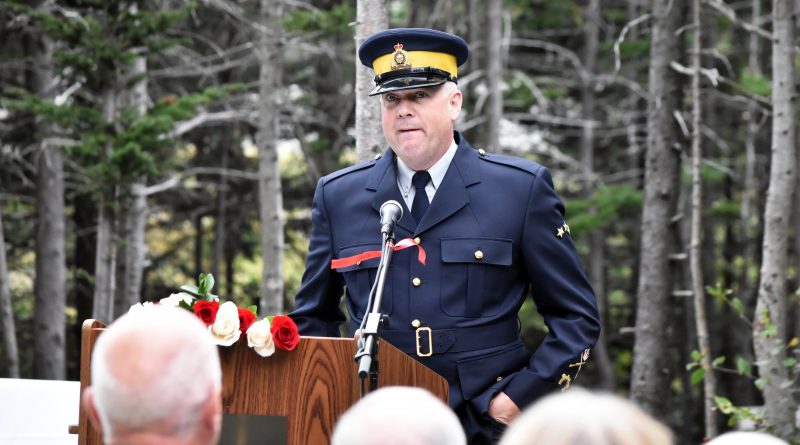 It was a sombre ceremony, but one tinged with hope as MADD Canada dedicated a bench on Sunday in memory of Nicholas Coates of CBS, who was killed by a drunk driver six years ago.

Though the head of the Newfoundland chapter of Mothers against Drunk Driving, Coates’ step-mom Patricia Hynes-Coates, lamented the continuing threat to safety that impaired drivers pose, there was concensus that police officers and the public are making some headway.

About 30 people, among them parents and siblings of people killed by impaired drivers, attended the hour-long dedication ceremony held on a trail outside the Manuels River Interpretation Centre, where the bench is located. Hynes-Coates thanked the families of victims for coming. “I know how much courage and strength it takes to come to one of these ceremonies to honour your loved one,” she said.

Hynes-Coates also thanked members of government, including federal, provincial and municipal representatives, as well as the members of the province’s two police forces, represented by RNC Chief Joe Boland and RCMP staff sergeant David Ossinger, for their continuing partnership in the campaign against impaired driving.

“It’s very important that we work together to make sure there are no more deaths on our roadways,” she said. “We encourage everyone to never drive a car, boat, ATV or any other vehicle while you’re impaired. We ask you to never get into a vehicle with someone who’s been drinking or using drugs.

And it’s very important that we call 911 and report any drivers that we suspect are impaired. There is never an excuse for anyone to get on our roadways this day and age and drive impaired or recklessly. There is no need. We have taxis, we have family and friends who are willing to pick you up and bring you home. So, if you are going out and you’re going to avail of a few social drinks or other substances, don’t drive. It’s a no brainer. You do not need to get behind that wheel.”

Hynes-Coates said the ceremony was meant to honour all those who have been impacted by drunk driving.

Among the special guests was Ken McDonald, who is running for re-election as the Liberal candidate in the federal riding of Avalon. McDonald said as he listened to Hynes-Coates speak, he couldn’t help wondering how many parents have lost a son or daughter, “because somebody made the wrong choice when they decided to drink and drive.

“We’re not saying somebody can’t have a drink,” McDonald added. “But at least have the fortitude to be prepared and to know not to turn on that vehicle. You should leave it and call a taxi, call a friend, call your Mom, call your Dad, call somebody… People should have the common sense to not get behind the wheel of a vehicle after they’ve been drinking. It’s unfortunate that we have to have ceremonies like this to remind us of all the people who were the unfortunate losers in a battle with a machine that is much bigger and more powerful than they are. And it has to stop… because in most cases it’s the innocent bystander who is the one who pays the price… We all have a part to play. We have to teach our kids and convince our friends and neighbours to make the right choice.”

“Losing a loved one is heartbreaking in itself,” said Gambin-Walsh, “but to lose someone because of impaired driving is particularly devastating given it is so needless and unnecessary.”

Gambin-Walsh said everyone who passes by the Nick Coates’ bench while walking the trail will be reminded of the tragedies caused by impaired driving.

RNC Chief Boland admitted he finds such ceremonies difficult. “I can only imagine what families and friends go through when they lose a loved one,” he said.

And he is reminded of that, Boland said, every time he see the RNC’s officers answer such calls and witnesses the fallout on a victim’s family and on the officers and their families.

Boland said he and Justice Minister Andrew Parsons have been working for the past year on better means to enforce highway safety. The RNC has also reached out to municipalities for support in its bid to double the size of its traffic enforcement unit, he said, and is hopeful that it will come through.

“It’s not on any one of us to have safe and healthy communities,” said Boland. “It’s really on all of us… If someone makes the decision to get behind the wheel (impaired) then we need people to pick up their phones and call us – and we do get that support in the community.”

Staff Sgt. Ossinger, who heads the RCMP’s traffic enforcement services in the province, agreed with Boland about how tough it is for officers to deal with the tragedies caused by impaired drivers.

“We strive to remain professional, neutral and dispassionate,” Ossinger said, “but we hold that in balance against the fact of us being human beings as well. So, a memorial bench that is dedicated to all, can be a comfort to us as well, and to all those professions who work and suffer alongside victims of impaired driving. Those who prosecute cases, and pass new laws, who treat the wounded in hospital, investigate the cases, we pick up some scars along the way and we get comfort from your support… So, thank you for that, sincerely.”

Before calling on Boland and Ossinger to unveil the bench and helping to oversee a ceremony which saw families of victims place a memorial rose on a table in honour of their loved ones, Hynes-Coates took a minute to thank first responders.

“I’ve seen what our officers are going through,” said Hynes-Coates. “They suffer from PTSD. They’re the people who come knock on our doors and tell us our loved ones are not coming home or that that they’ve been injured. These officers are amazing, and we owe them a great deal of respect, consideration and love.”