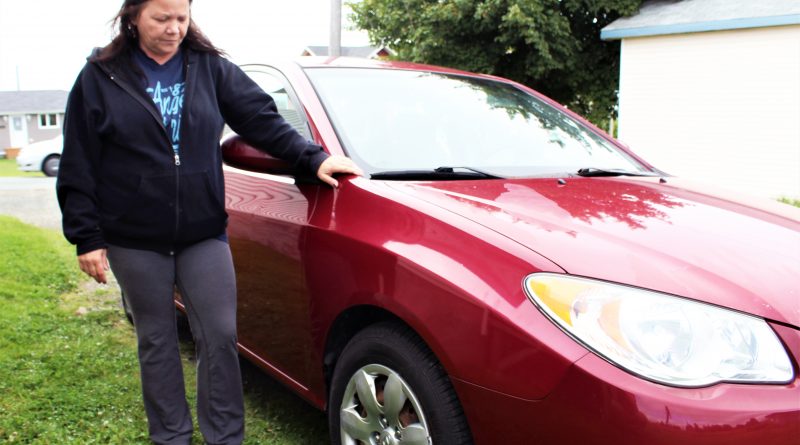 Helena Vajdl has been living on Peachytown Road in Foxtrap for three years. Since moving from Alberta, she said, she’s come to learn that driving in and around CBS, as well as some other places in the province, is slightly different than back on the mainland, thanks to the number of potholes.

Her own street is no different. Just a short distance from her home, Vajdl said, she learned the hard way just how far back an unexpected run-in with a pothole can set a person.

Only a few hundred metres from Vajdl’s house are four deep holes in the road, and it was one of those holes that was responsible for some hefty damage to her car, she said.

“I had my daughter in the car, and we were just going to go check the mail,” Vajdl explained, noting she took an alternate route that day because it was shorter, and the roads were a little easier to drive over. “It was only about, say, four houses down. Someone started to pass me, so I had to get a little closer to the right-hand side of the road. I hit one of these potholes, heard a big bang, and my car stopped immediately.”

When she got out, Vajdl found her car sunk down atop the passenger side tire – the result of a broken control arm, she later found out.

The metal and plastic around her tire area has visible scratches and other sorts of damage where the tire collided with the frame of her car. Vajdl said the timing could not have been worse, given that she had bought the tires only a day prior to hitting the pothole.

Vajdl’s husband, thankfully, was vehicle-savvy enough to be able to replace the broken control arm, but Vajdl says the danger is still there as long as potholes such as this continue to exist.

This year, the Town of CBS is undertaking a street rehabilitation program, spending hundreds of thousands of dollars on roadwork in the community.

This includes the complete re-paving of some of the town’s biggest roads and streets, as well as the installation of sidewalks in some areas. But with CBS being the biggest town in the province, population-wise and perhaps geographically, it’s impossible to get to every street at once.

Vajdl herself commended the work being done, and said she’s seen some significant, and positive, changes to some of the town’s harshest roads over the past few months.

However, Peachytown Road has yet to see this type of treatment. Until it does, she regards the potholes, and others like it around town, to be a serious danger to motorists.

Ward 3 councillor Gerard Tilley, who is also the chair of council’s public works committee, said Vajdl’s steet is on the list.

“It’s definitely on the radar – Peachytown and Greeleytown,” said Tilley.

“Outside of Legion Road and Fowler’s Road, those are probably our two biggest projects that we’re going to get covered off in this construction season. (The company) is hoping to start around the second Monday of September.

Tilley said Greeleytown Road will see some asphalt work, as well as some culvert replacement and ditching. The goal is to completely re-do Peachytown Road with some brand new pavement.

“Our 2019 paving project comes in as one lump sum of money, so our hope is that, based on the amount of money that we’ve spent so far, that we’re going to get into the end, or as close to the end of the season as possible,” Tilley said. “Right now, we’re pretty confident that we can get it all done.”

Still, it’s not just single vehicle damage that Vajdl says she is concerned about. She highlighted several instances when she had to swerve away from oncoming drivers who were trying to steer clear of a deep hole on their own side of the road.

“I think that’s one of the scariest problems with this,” she said.

Meanwhile, Vajdl had hoped the |Town would cover the cost of some of her damage, specifically the $120 for a control arm.

“I wanted to see if the Town of Conception Bay South would be able to do anything … they messaged me back, but all it said was that they were sorry for my experience but there was nothing they could do about it,” she said.

Tilley said although the Town has no exact policy regarding this, they handle it in the same fashion as other municipalities.

“We take people’s complaints, and we base our decisions on that,” he said. “I don’t personally recall us reimbursing anyone in the past.”

Tilley is encouraging people to report a pothole when they see one. “Last year, our success rate for responding to (reported potholes) was in the nineties,” he noted. “So, if people see a pothole, they should just give us a shout and we’ll try and address it as best we can.”