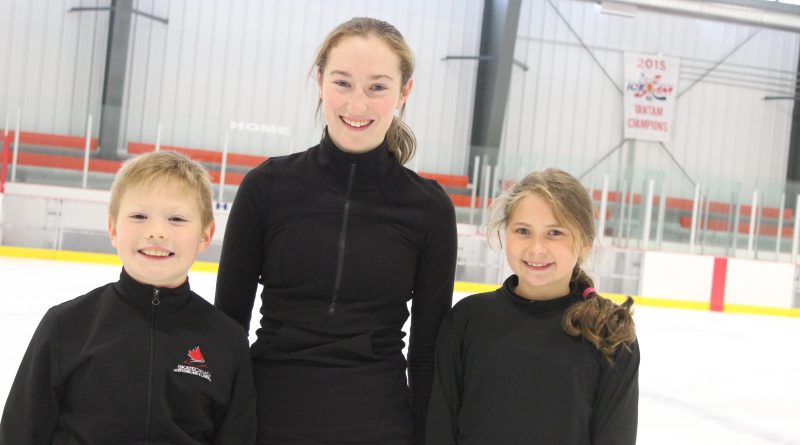 Hours and hours at the rink have paid off for several young skaters with the CBS Skating Club.

“I’m excited to get to go and skate with some different people,” said Pynn, 16, who has been skating since she was three.

Flynn and Martin will be competing as pairs (as well as singles), and while they have been skating together as pairs for years now, it will be their first time being judged.

“Here in Newfoundland there are no judges for pairs. These kids have competed for two years but have never been judged,” said Flynn’s mother Heather.

“This will be their first chance to get a report card,” she explained.

It means they have no refence point for how they will perform at the competition. But these young athletes are up for it.

“I like to challenge myself,” said Martin, who began skating when she was three. “I’m really excited, and a bit nervous. But really excited.”

Parents here say that there is more room for boys to become involved in the typically female dominated sport as it would allow more pairs teams to compete.

Flynn, who was in Ontario earlier this summer, earning gold in the Pre-Juvenile Men’s Under 11 event at the Minto Summer Skate Competition, will only have five or six boys competing in his category.

The girls, meanwhile, will have dozens.

Not surprisingly, figure skating has made several of these young athletes better hockey players as well.

Flynn, along with others, such as 18-year-old coach Hayley Dalton, say that the skills they’ve learned while figure skating have crossed over nicely into their hockey game.

“It helped my skating a lot,” said Flynn, who has been figure skating for five years.

When different skating maneuvers and tricks are introduced during hockey practice, there’s a good chance Flynn has already learned them.

“The basic skating skills you learn are transferable,” added Dalton.

Over the next month, all three skaters will be practising hard.

They’re also busy selling tickets for an October calendar draw to help fundraise for the trip.

During October, a new prize will be drawn each day in the spooky Cash Boonanza.

For more information on the calendar draw, you can visit CBS Skating Fundraising on Facebook.

Meanwhile, another CBS skater has an exciting opportunity coming up this September.

Melanie Taylor will skate alongside figure skating household names Tessa Virtue, Scott Moir, Patrick Chan Kaetlyn Osmond and others on November 23 at Rock the Rink at Mile One Centre.