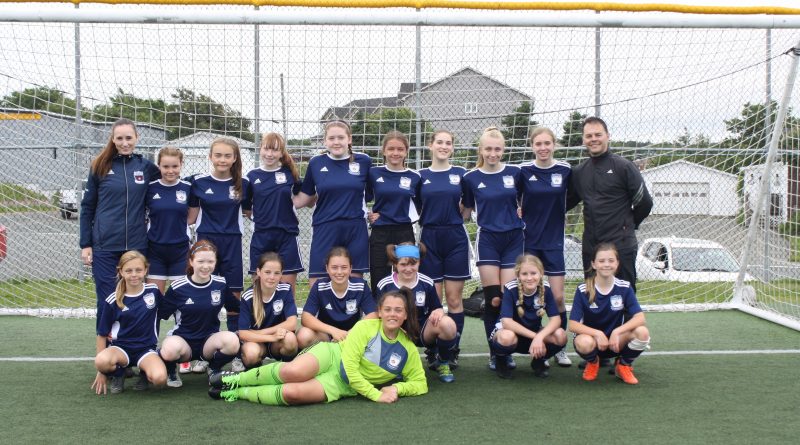 The Conception Bay South Soccer Association is enjoying a banner year, literally, as the awards, banners and medals pile up from a busy and successful season of football.

In just the past week, teams from the Strikers club collected one gold, one silver and two bronze medals at provincial championships.

But that’s only the most obvious sign of the club’s accomplishments. The association’s general manager, Darrin Bent, said the roots of the success go much deeper, right down through the 1,200 players and coaches, the 80 different house league teams composed of young athletes from ages 3 to 17, and the 25 all star teams that represent the club in Metro League and provincial play.

Bent said one of the things that makes the association stand out amongst the crowd lies in the ever-passionate fan an volunteer base that the organization has accumulated over the years. It’s these people who keep the word alive about the goings on with the different teams, leagues, and tournaments, and that they play a major role in keeping up the interest in the sport.

“When I came here six years ago, we had 18 staff members, and in the last six years we’ve built that up to 38,” said Bent. “That’s through the expansion of programs, and keeping people involved. Soccer has seen a downward trend across the province. Even the provincial body has asked clubs, ‘Why aren’t you keeping up your numbers?’ But, here in Conception Bay South, we’re bucking the trend. When everyone else was going down, we stayed the same, and now it’s starting to switch up and things are moving forward for us. Some of that is because we’re creating new programs, we’re getting more people involved, and we’re trying to keep people involved beyond under-17.”

The association’s growth is being fueled by soccer involving adult players as well with leagues being formed for women and men players over the age of 25. These two leagues combined host a combined 16-teams.

Bent said the club is also working on forming a women’s 35 years and over league, possibly to start play next spring.

“There seems to be a demand for (age) 35 plus,” Bent said. “Sometimes the abilities of the 25-35 group can still be completely different than those in the 35+ group. I think that, when you do that, you open it up for an even older group of people who might not want to come play in a 25+ league. It’s all about creating opportunities for people to keep playing. That’s really what it’s all about.”

Lauren Rowe is one of the players in the CBS Strikers girls under-15 league.

Rowe was named the Newfoundland and Labrador Soccer Association’s junior female player of the month this past month, an award she also took in June. She’s been playing with the Strikers’ organization since her parents first laced up her boots for the Timbits league for children under the age of 3.

Rowe said a large part of the reason behind her remaining committed to the association is the attitude she sees in her fellow Strikers when compared to a lot of the teams they meet on the field.

“I find our teams to be more friendly when we’re playing,” Rowe said. “It’s a game of soccer, and some teams take it a lot more seriously than a sport. I see some teams are a lot more aggressive, yelling at the refs and stuff. I find that we, well, we’re just trying to have fun. And that works for us.”

Michelle Hanrahan-Brown with the club’s rally committee said that attitude extends to the volunteers and staff as well.

“I find that, too. Very much so,” said Hanrahan-Brown. She cited a situation that saw players on an opposing Boys Under 9 team push things a little too far physically. “But, we decided that we needed to respect the referee, and let the coaches do their job,” she said. “It was a good opportunity for us to educate them, and show them that you don’t go back and get aggressive with (the team) or the official. You let them do their job.”

Hanrahan-Brown added the success of the CBS Soccer Association can also be traced to the amount of work that’s gone into expanding the club’s list of programs over the last few years, making the sport accessible to pretty much anyone.

“I think that what we’ve done with the programs over the last number of years has given so much of an opportunity – regardless of what your interests are, no matter if you want to play competitively or casually. It’s there,” she said. “I don’t know how many newbies we’ve convinced to be out there on the pitch who had never kicked a ball before … Now, they absolutely love it, and they’re still doing it. So, I mean, there’s an opportunity to play all the way through, as long as you’re physically capable.”