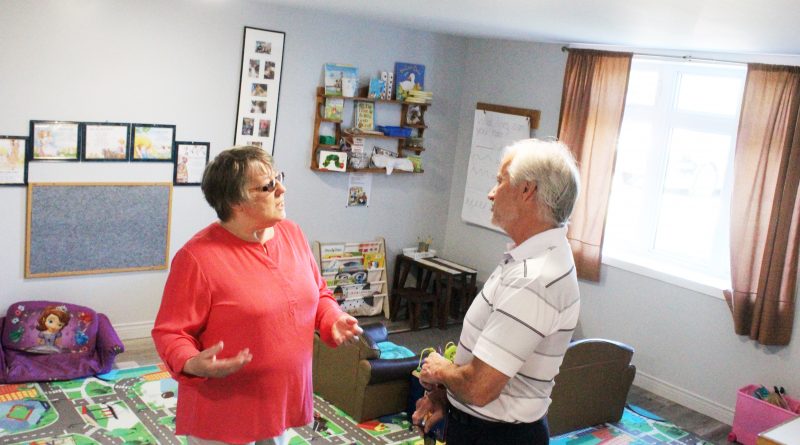 The tots of Merry Care Day Care in CBS were probably wondering why there were so many big people at day care on Aug. 14.

Provincial Minister of Education and Early Childhood Development Brian Warr was at the day care to announce funding of $75,000 to the Association of Early Childhood Educators NL (AECENL) for professional learning opportunities, including webinars, mentoring and support.

The focus is on the newly released “Navigating the Early Years – An Early Learning Framework,” a collaboration between the provincial government, AECENL, and other groups.

“Early Childhood Educators play a critical role in a child’s development,” noted Warr. “Implementation of the early learning framework is expected to encourage and promote consistency in our goals for childhood development, quality and inclusive early learning for children, increased understanding of the importance of early learning experiences, and communication, collaboration, and partnership wherever appropriate between all those involved in the care of children. It is grounded in research and evidence-based practice; it reflects the reality that early childhood is a time of rapid growth and development, and that experiences during the early years lay a foundation for life-long learning. The framework, along with the professional learning opportunities, will provide ECEs with the tools and resources to continue to build effective, quality, early learning programs in a childcare setting.”

Skye Crawford Taylor, the Executive Director of AECENL, explained that play-based learning is more than just leaving children to their own devices and hoping for a good outcome.

“What the framework does for our profession is it validates it,” she said. “It reinforces that children learn through play-based experiences… “Educators set up the environment with intentional materials to foster play-based learning. So, the children are exploring on their own, but it’s with materials that the educators have put out.”

Crawford Taylor said she hopes the funding will help address some of the issues facing Early Childhood Educators (ECEs).

“I think the biggest issue is creating the awareness of early childhood education as a profession and ECE’s as professionals,” she said. “We are in a crisis in our province of having enough ECEs to work in the field, and that’s one thing, through initiatives of the government and through AECNL we are all working together to address this issue.”

That’s something the host of the event, the owner of Merry Care Child Care Centre, Mary Walsh, can relate to. She opened the centre in 1989 – the same year ACENL came into being. She told reporters that one of the biggest misconceptions is that day care is glorified babysitting. She argued it’s actually an important step in a child’s education.

“A child just doesn’t come to a day care to just be cared for; they get a lot of education here,” Walsh said. “We have a cash register here, and we’ll give them a dollar, and say ‘What do you have to give me back?’ and obviously, if they don’t know their numbers, they might say ‘I’m going to give you back a thousand dollars,’ which sounds good, but at least they know they’re giving money back, there’s an exchange there.”

Walsh is a registered nurse, and was head nurse at the Janeway, but explained that when she decided to open the centre, despite her nursing credentials, she needed proper training.

“I did feel, when I came to do childcare, that I needed to go and do childhood training,” she said.

And while she applauds the governments efforts, going so far as to say that she could not run the play area without the government’s assistance, Walsh said there is plenty of room for improvement.

And what’s number one item on her list? “Salaries.”

“I do thank government for the operating grant that we come under that we could increase our salaries, but, because early childhood educators are professionals, they deserve more money than they’re getting, and they should be recognised for the education they have,” Walsh said.

She said it’s hard to give an estimate on what an ‘average’ salary for an ECE would be. But, she knows for sure it’s too low.

“There’s no guaranteed average because no one can pay what they want to pay,” Walsh said. “I don’t even want to say an average because it’s too low. It’s not where I want it to be.”

Warr noted that government does offer bursaries to help ECEs. A representative from his office pointed out later that government has removed the cap on the number of courses claimable per year under the ECE Trainee Bursary, doubling the number of courses claimed this year over last year, and increased the Early Childhood Educator On-Campus Field Placement Bursary to $2,500 from $1,200 and the Graduate Bursary to $7,500 from $5,000.

As to wage increases, it’s something they can work on.

“As we move forward, I’m sure we’ll continue to make efficiencies,” Warr said.

Warr’s staff also noted that ECEs may be eligible to receive an income supplement of between $12,900 and $16,900 annually.

Walsh would also like to see costs for childcare decreased.

“Some parents would love to have their children in childcare, and they’re right in the middle class of whether they can pay for it or not,” she said.

Warr, again, noted that government has taken steps in Budget 2019 to address the issue of affordability.

“To further help reduce the cost of childcare for parents, the threshold for a full subsidy has been adjusted to $35,000 net family income. A partial subsidy is also available to many families with higher than a $35,000 threshold,” said Warr.

That’s the partial subsidy that Walsh had referred too.

And while, according to ‘Developmental Milestones,’ a Canadian Centre of Policy Alternatives 2018 report, the cost of childcare in St. John’s has dropped 13 per cent between 2017 and 2018, the largest decline of the 28 Canadian cities surveyed, St. John’s remained the fourteenth most expensive for infant care ($977 a month) and nineteenth most expensive for toddler care ($726 per month) in 2018.

Montreal comes in the lowest on both categories: only $175 a month for either infant or toddler care. Toronto comes out on top at a steep $1,685 a month for infant care; Vancouver meanwhile, has the most expensive toddler care, with parents paying a median $1,407 a month.

The study also found that 17 per cent of day care centres in St. John’s were charging a waiting list fee; a practise now banned in Ontario.