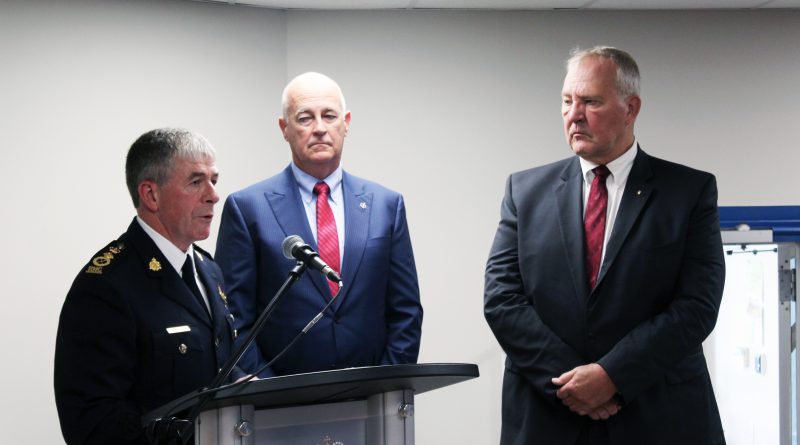 During a summer news cycle which included 19 shootings in Toronto over one long weekend, and a manhunt across the North for two men suspected in three murders, Canada’s Minister of Border Security and Organized Crime Reduction visited CBS to announce a major program against gun crimes.

The backdrop was the new Royal Newfoundland Constabulary detachment in Manuels. Federal minister Bill Blair, himself a former police chief, was joined by Avalon MP Ken McDonald and RNC Chief Joe Boland, as he announced upwards of $1.8-million in funding to be spent over five years to aid in the fight against gun and gang violence in this province. The money will come from a federal pot of $327-million for similar efforts across the country.

The Manuels location has a special significance, McDonald reminded those in attendance. He recalled chairing a public council meeting in the very same building back in 2013, when he was mayor of Conception Bay South and being interrupted by the fire chief at the time, who informed him of the killing of Julianne Hibbs.

The woman was shot down by her ex-boyfriend Brian Dawe, who also murdered her fiancé, Vince Dillon, at a business in the adjacent shopping centre.

Within Newfoundland and Labrador, money from the new program will be used to support law enforcement and criminal prosecutions, and create partnerships with community agencies, as well as provide professional development and education for police officers.

Boland pointed out that violent offences have been on the rise in Newfoundland. He noted that motorcycle gangs are not necessarily a rare sight in the province, and that these outlaw groups are “very active.”

Boland said the federal funds will help his force acquire forensic and new and improved surveillance equipment. A new crime suppression team will be created as well, which will focus on motorcycle gangs that enter the province during annual runs across Newfoundland.

Boland said there are also plans to hold a gun and gang violence workshop, which will focus on gun-related issues specific to the province.

“Trafficking narcotics by organized crime groups have led to new and increased challenges to law enforcement, and are negatively impacting the health of our communities,” Boland said. “As we know, law enforcement cannot take action against gun and gang violence alone. It will take the collaborative efforts of all community partners, including other first responders.”